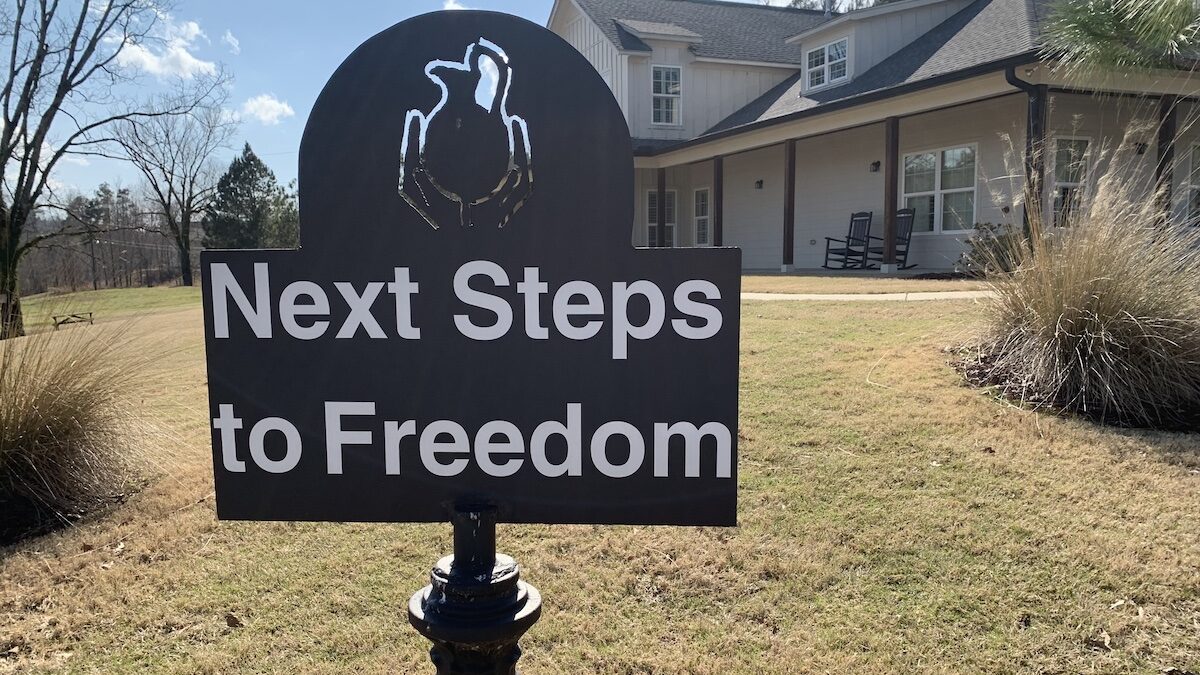 The 2022 World Games will feature 3,600 athletes from more than 100 countries over an 11 day period in Birmingham. There could be as many as 500,000 visitors to the games, according to Nick Sellers, CEO of the games.

Whether it’s hundreds of thousands or tens of thousands of people, there’s definitely going to be an influx of visitors to town. So, what does this mean for crime?

Sex trafficking is a roughly $110 million yearly industry in Birmingham. That’s based on a few statistics like how many girls have stable work, the typical amount of daily buyers, and the going rates.

“If you calculate that out, then you can see it’s incredibly lucrative to be a trafficker,” Friedman said. “And what’s different from trafficking and other crimes is: let’s say we sell an illegal gun and it’s gone. You sell drugs and they’re gone. If you sell a female, you can keep selling that female over and over again.”

Not only is trafficking profitable in Birmingham, but it’s also convenient. Interstate 20, which cuts straight through Birmingham, is coined the “Sex Trafficking Superhighway.” That’s because Birmingham connects Atlanta to Dallas and intersects with Interstate 65, which connects Nashville to the Gulf Coast.

Friedman not only prosecutes these kinds of cases, but she also co-chairs the Junior League of Birmingham’s Anti-Trafficking Committee. Over the last few months, the JBL has partnered with World Games to train staff and volunteers on how to recognize human trafficking.

“People don’t know what it looks like. They don’t know how to recognize it. They don’t know the signs,” said Kathy Boswell, Vice President of Community Engagement for the World Games. “When you think about this event – it just made sense – to be able to help 3,300 [volunteers] go back to their communities more aware about human trafficking.”

Law enforcement is involved, too.

Patrick Davis, the FBI Agent in Charge for the games, said the event is classified as a Special Event Assignment Rating 1 – or a SEAR 1.

“We do have components within the Department of Justice, the FBI, the ATF, and the U.S. Marshall Service are all involved in the security plan,” he said. “So you will have these federal partners working with state and locals to make sure that the human trafficking component doesn’t escalate any further.”

Davis said they’re working in the background on plans to combat human trafficking, but that he can’t share specifics.

“Keep in mind, we have athletes coming from over 100 countries from around the world, where some of these events may be legal in those countries, so we need to make sure they understand the significance of the law,” Davis said.

So, what is human trafficking?

There are a variety of types ranging from labor and debt bondage to familial and sex. But for this story, we’ll focus on female sex trafficking because in the last four years it’s made up more than 70% of all trafficking.

But deciphering what’s prostitution and what’s sex trafficking can be kind of difficult.

Friedman said sex trafficking involves a sexual act for a thing of value, something like money, drugs, or even food. But it also has to involve either force, fraud, or coercion. If the person is a child, prosecutors don’t have to prove those things.

“About 90% of what we used to call prostitution is now legally trafficking,” said Friedman. “If a pimp is involved, if there’s any kind of force then we’re looking at trafficking. So you want to ascertain whether there’s a third party involved in this transaction rather than just the girl and the John.”

A ‘John’? What’s that? Let’s talk about trafficking ‘lingo.’

A ‘John’ is someone who pays for or trades something of value for sexual acts. It turns out that trafficking has its own kind of language and knowing what to listen or look out for can be helpful.

Some popular terms include branding, Romeo pimps, a stack/quota, and circuits. We’ll do a quick debrief:

Branding: is a tattoo or carving on a victim that indicates ownership by a trafficker/pimp/gang.

“You want to look at the wrist, the chest, the neck. It could be symbols – anything from a crown or a rose to someone’s name. But it has to be somewhere visible so other traffickers know who that girl’s with,” Friedman said.

Romeo pimps: lure the victims into thinking they’re dating and will sometimes shower them with gifts. Friedman said these pimps typically reach out to girls through social media or have their ‘bottom‘ recruit the women.

“Often that kind of trafficking is misidentified as domestic violence because they say ‘that’s my boyfriend.’ But in the reality, he’s got six other ‘girlfriends’ that are all staying in the same motel,” she said.

Stack or quota: a set amount of money that a victim must make each night before they can go “home.”

“And if there’s a stack or quota, who’s imposing that? Is that a self-imposed quota they want to make that night? Probably not,” Friedman said.

Circuit: a group of cities typically within a car ride of each other. Traffickers will advertise these women in multiple cities then drive to where they get the most responses.

“So they’ll post those ads on those locations in their circuit and then take the girls to wherever they have the most demand. Just like any business,” she said.

How and where are these women “sold” for sex?

“People always picture Liam Neeson’s “Taken” – like the white van … but that’s not what it is. Human trafficking and human smuggling are very different,” Friedman said.

Less than 3% of trafficking victims are kidnapped. Instead, many are runaways, and 41% of the children trafficked are forced into it by a relative or family member, according to the U.S. Department of Justice.

These women are typically sold on websites that anyone can access. Previously, they were sold on backpage.com before it was shut down by the DOJ.

“The visual of stepping on a [pregnant] spider, and a million spiders run out, that’s how it was when they shut down backpage. Then all of a sudden instead of one site where you can buy and sell sex, there’s now at least, in the Birmingham metro area, 25 at any given time.”

Friedman said that’s when knowing the trafficking ‘lingo’ can be helpful.

“Snow bunny will be a white victim. A ‘new, young, fresh’ can be language for someone underage,” she said. “When you string together the code, you can figure out what they’re selling and maybe whose selling it. And then there are law enforcement techniques to identify victims – that I can’t talk about.”

Who are these women?

“The most common thing we see is a young lady has experienced childhood sexual abuse. She might have been in the foster care system. But that childhood abuse hasn’t been healed yet [and] makes her very vulnerable to a human trafficker,” said Carolyn Potter, CEO of the WellHouse.

She said traffickers lure these women in by providing love, food, clothes and shelter.

“By the time [trafficking] happens, she’s already bonded to him in some way, and it’s called a trauma bond. Much like Stockholm syndrome,” Potter said.

The WellHouse was founded by a trafficking victim. It’s a Christian residential living facility for female survivors of sex trafficking.

“Healing really begins when they recognize that they’ve truly been victimized,” Potter said.

The WellHouse serves an average of 25 to 30 residents at one time. It aims to show Christ-like love through therapeutic programs, life skill classes, and a medical clinic.

“You don’t have to be [a believer] to come to the WellHouse,” Potter said. “It doesn’t matter if you’re straight, gay, or whatever … You are welcome here.”

Typically the women stay about six months, but they can stay up to three years. The goal is to make them independent from their previous life in sex work.

These women are referred to the WellHouse by hospitals and the legal system.

“Quite frankly we’re fully dependent upon the legal system to step in – whether it’s the World Games or just everyday living – and when I say legal system, I mean law enforcement,” Potter said.

According to the National Human Trafficking Hotline, roughly 65% of cases in Alabama in 2020 came from tips made by the public.

What are the signs you should look out for?

Deputy District Attorney Friedman said there are a number of signs of potential trafficking. But she adds that only seeing one sign is not necessarily a sign of trafficking. Here are some of the possible signs:

“If something feels off about an interaction, there’s a reason you feel that way. So whenever you feel some kind of ‘ick, I always encourage people to call the police or the hotline number for homeland security,” she said.

National Center for Missing and Exploited Children: 1 (800) 843-5678 or https://www.missingkids.org/gethelpnow/cybertipline

Editor’s Note: The Junior League of Birmingham is a sponsor of WBHM, but our news and business departments operate independently.

This story was produced with assistance from the Public Media Journalists Association Editor Corps funded by the Corporation for Public Broadcasting, a private corporation funded by the American people.