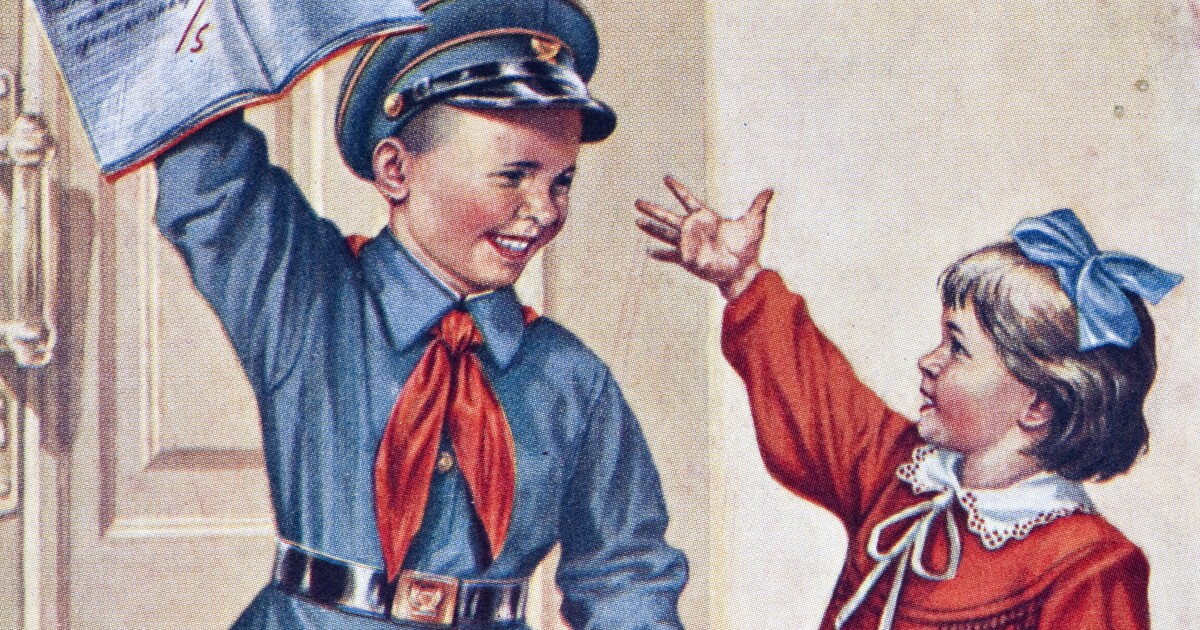 I was busy rehearsing my poem for a first-grade competition. It was about the Russian people, our “best friends and saviors,” who had liberated us Czechs in our time of need. Babi sighed and set a bundle of red paper rectangles on the kitchen table.

She started muttering. I caught some bad words, like “stupid Russians.” We’d been told at school to tell our teachers if we ever heard someone say something bad about our friends. Would I have to report my grandmother?

“Babi, what’s that?” I asked, pointing to the rectangles, to distract her from saying anything else bad.

“Flags. For the windows.” She rolled her eyes.

I was relieved. Babi was only angry because she had to paste the papers on her perfectly cleaned windows.

Since beginning grade school, I had two fervent wishes: to see Lenin embalmed in his glass casket in Moscow, and to become a Pioneer — a Communist program similar to the Girl and Boy Scouts. We were taught to see Lenin as strong but tender, part father and part Mikulas (the Czech version of Santa Claus).

A Pioneer was a child who wore a red neckerchief, a symbol that they’d achieved perfection in doing good deeds and being a good communist. You could not become a Pioneer until third grade, but I was already on the lookout for good deeds.

Carefully pasting the Soviet flag on every pane of glass in our home was just the sort of thing a good Pioneer would do. Any household not decorated would be a bad, capitalist-scum family.

When I finished, I ran outside to admire my handiwork. Up and down our street little red rectangles had appeared in every window — like happy red hearts, I thought. It was beautiful. My communist childhood in Soviet-occupied Czechoslovakia felt enchanted.

Then, one dreary fall day, two men in black uniforms showed up at Babi’s house with a beautiful, fat woman: my mother, seven months pregnant. I had not seen her in years. In 1968, when I was 3, she fled the Soviet invasion on the back of a motorcycle.

With her reappearance came information about the outside world that completely contradicted all I had been told about our “best friends.”

I knew I should report my mother to my school for speaking ill of our saviors; I also knew I never would. Babi threw warning glances at her, saying, “Careful. Language.”

To me, the problem with my mother’s stories of the outside world was that they would prevent me from being a good Pioneer and ruin my chances to be a good communist.

Czechoslovakia was, at one time or another, part of the Astro-Hungarian Empire, Prussia, Germany and lastly the Soviet Union. Our people were used to being occupied. Most of us became a people who watched soldiers and tanks roll into our country with tears streaming down our cheeks, knowing there was nothing we could do. So we went to have a beer or five.

But my mother was fearless and oppositional.

The government placed her under house arrest, allowing her to live with her parents. The Czech police kept tabs on her and anyone who came to the house. Our visitors encountered harassment and intimidation at their jobs. Becoming a Pioneer no longer felt possible, no matter how many good deeds I did.

After three years of house arrest my mother, my baby brother and I were released to go to Sweden. I was excited to meet my father again, but what I knew of capitalist-scum countries was terrifying. It didn’t matter that Mom said I could have a banana or orange anytime even though right now we only got one banana a year at Christmas. In my mind every place not cared for by our “best friends” was a wasteland where people popped out of garbage piled along the sides of the road shooting at you as you walked down the street. My mother’s words were no match for the propaganda surrounding me at school, on television and in the streets.

When we arrived in Sweden everything was peaceful and immaculate. We had so many bananas that some would turn brown before we could eat them. My parents could say anything they wanted. I didn’t have to turn anyone in to my teachers.

Occupation is a horror beyond what is seen in the news; it is not just lack of shelter, long food lines and tanks rolling down the street.

The invisible horror is the invasion of your mind. If you think oppositional thoughts, you might mutter them under your breath where they could be overheard, or confide them to a friend. Your own child — or grandchild — may turn you in and may cost you your life.

It is you who has been occupied.

My Russian poem won that first-grade competition. I can only remember the last line: “The Soviet Union, our best friends!” My reward was a Russian pen. It never worked.

Paulina Porizkova is a model, actor, novelist and the author of the forthcoming essay collection “No Filter.” @paulinaporizkov