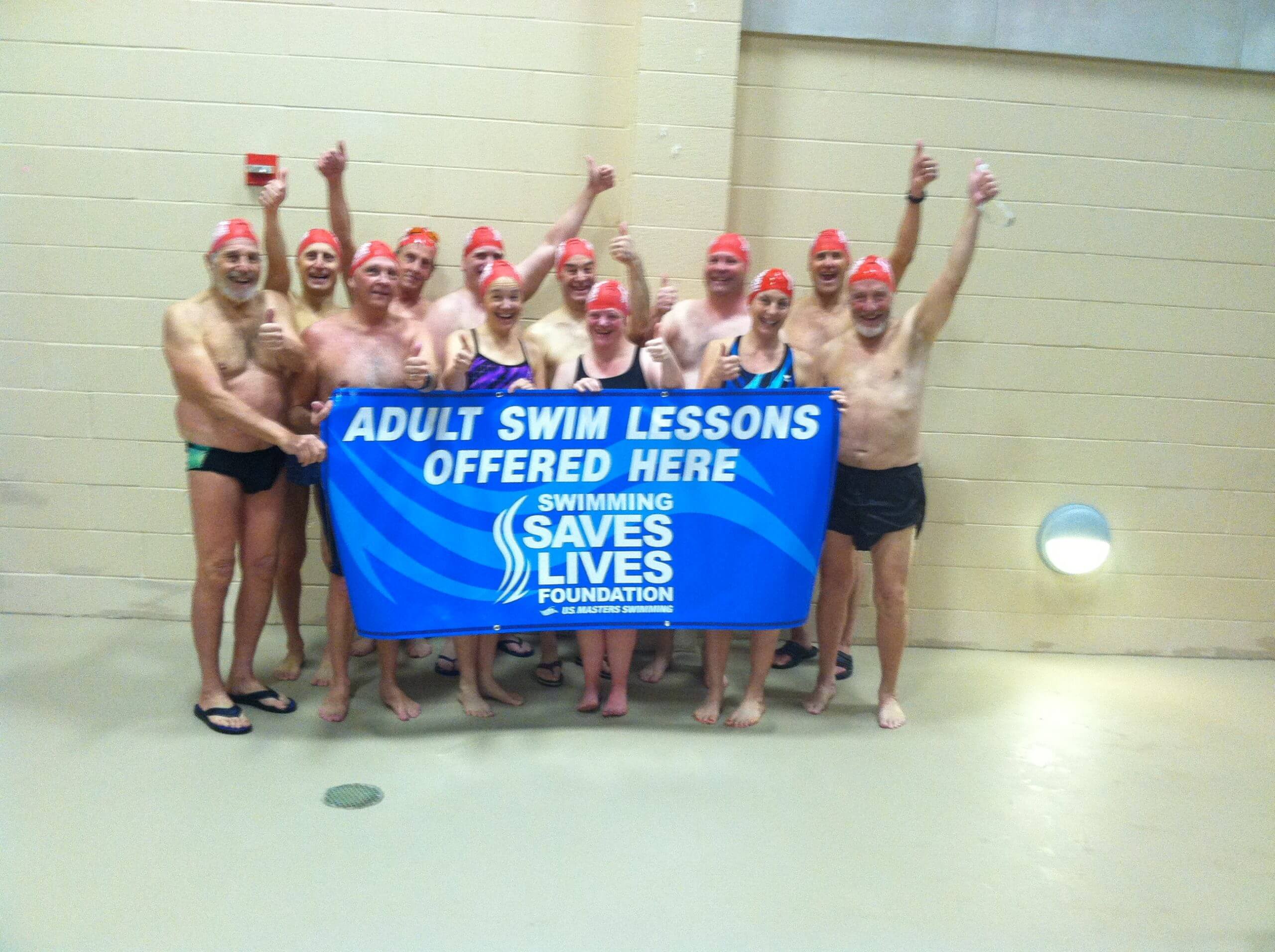 Written by Bill Meier, US Masters Swimmer and Coach

There was magic in the water.

Ray, a Masters Swimmer turned volunteer swim instructor was helping Mary. On the other side of the pool, Mary’s two kids were doing bobs in Station One of our SwimAmerica program. Just as Mary lifted her face from the water, the first time she had ever done this, her two kids started clapping because they were well aware their mother’s fear of water. The other adult students around Mary took notice and also started clapping, and in a few seconds, everyone in the pool, the kids on one side and the adults on the other, were celebrating Mary’s courageous first step towards swimming.

This was the first night of the first-ever April is Adult Learn to Swim Month. It was clear that we were onto something.

April is Adult Learn to Swim Month was born of a desire to give back. After ten years of operating the Kilpatrick Athletic Center with a unique mix of college and community programs running side-by-side or even together, we felt a great deal of gratitude to the local community for their support of our students and the facility. One Saturday, while watching our SwimAmerica lessons, I wondered how we could show our appreciation.

What better way than to offer free lessons to people in the community who generally could not afford them? From the first radio spot highlighting the offer, the front desk phone began ringing and did not stop until all the lessons were filled.

At one of our first sessions, while watching for kids ready to move to the next station, a mom shyly approached me.

“Mr. Meier,” she said, “do you also teach adults? I never learned and really, I am afraid of the water!”

“Afraid of water,” I asked sympathetically. My honest question led to a harrowing story.

As a five-year-old, this woman was at a party with her family. She and her brother were playing by the pool while the adults were in the house. As she reached for a ball in the water, she fell in and immediately began sinking. Vividly describing how cold the water was as she sank, she hit the bottom on her back and could see her brother screaming at the edge of the pool. She only became afraid when she could not take a breath. Panicking and beginning to lose consciousness, she felt two arms under her as her father lifted her from the bottom and up onto the deck.

I was amazed at the details she remembered and almost instinctively said I would absolutely try to help. The following weeks were an exercise in mutual learning. It quickly became apparent that teaching someone who is afraid of water was more about getting over the fear than learning proper stroke techniques. The process and the joy this woman got after taking her first strokes inspired the first April is Adult Learn to Swim Month.

News spread that I was working with fearful adults. Through the next year, I worked with a dad who wanted to get over his fear before his kids discovered he was afraid of water, with a young woman whose first lesson included jumping off the diving board without flotation, and with an older immigrant gentleman who was told as a child that once in the water, sharks would immediately eat him.

Besides helping fearful adults, I also started working with triathletes and masters swimmers wanting to improve their strokes. Some of the people on my Master’s team became interested, and as another April approached, I proposed that we offer free swim lessons for adults alongside the kids, taught by Masters’s volunteers. Fifteen people stepped up.

Using my recent experiences, complemented by research on how to overcome trauma, I produced an eleven-page manual that I used to train adult volunteers. In April of 2009, those fifteen PaceMakers helped twenty-five adults overcome their fear or become more proficient swimmers. There were endless smiles, joyful tears, and deep satisfaction felt by teachers and students alike.

At the time, I was the Chairman of the Board for the New England LMSC. At our annual board meeting, I offered to go to any team interested in taking part in our April is Adult Learn to Swim Month initiative and train whoever was interested. With the Board’s approval, I spent a week traveling throughout New England and trained over 150 volunteers who ended up teaching almost three hundred adults.

In 2010, US Masters took notice of this effort and proposed a National program that eventually turned into their Adult Learn to Swim program. I taught the first ALTS class on January 3, 2011 in Indianapolis. Beginning with that mom’s first inquiry, there are now hundreds of adult swim programs and thousands of instructors in the US.

What’s that saying about dropping a pebble in the ocean?