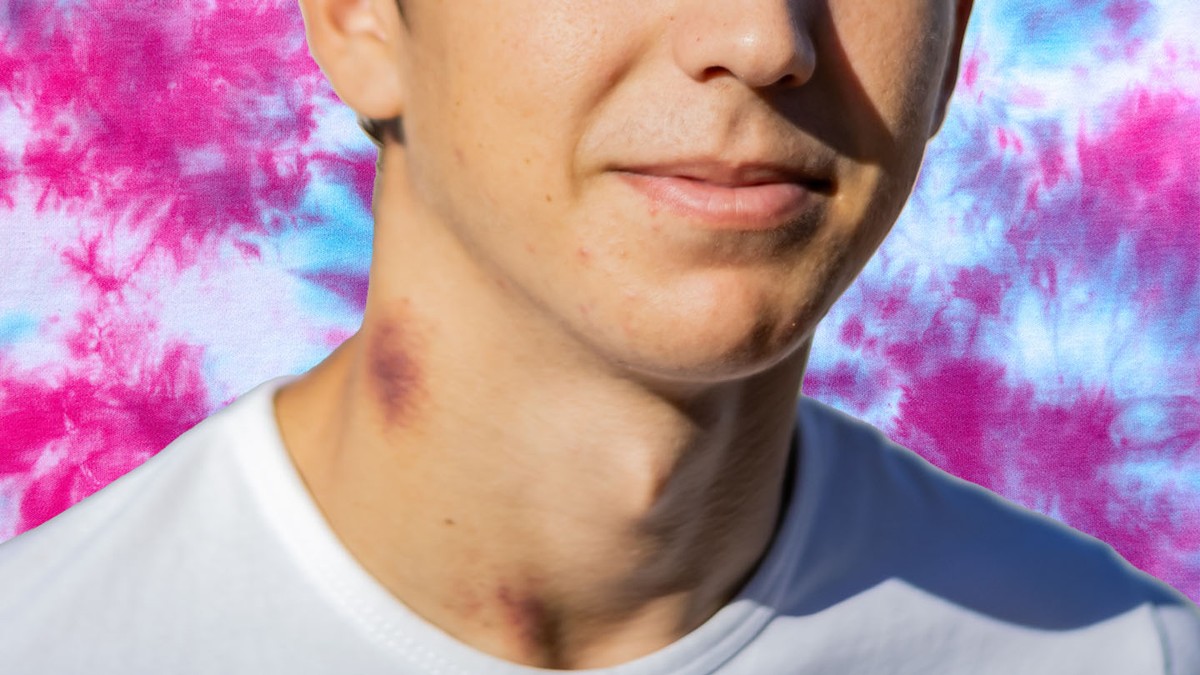 Spotting a hickey in the wild is one of my favourite pastimes.

“What’s that on your neck?” I’ll ask, smirk in full swing. The answers always fall on either side of the spectrum: mortification of the highest degree or a grin worn with an unwavering swagger.

I don’t get it – why do hickeys have such a bad wrap? They’re undeniably hot, a subtle souvenir of a trip to Poundtown, or at the very least Smooch City. Call me a hickey apologist – I’ll wear it like a badge of honour – because I reckon it’s time for the tides of collective sentiment to turn in favour of the hickey.

The renaissance of Y2K fashion does not just mean a rekindled romance of Ed Hardy trucker caps, tankinis and the flagrant exposure of cum-gutters. It means a sexual liberation, a turn of the millennium optimism and unbridled tackiness.

If we’re re-adopting tramp stamps, Juicy tracksuits and rhinestone studded sunnies, I believe the humble hickey is the next in line to be this season’s hottest accessory.

Embracing the hickey is brave. It’s meta ironic chic. It’s a semi-permanent whale tail. It’s both mysterious and not, all at the same time. It asks and answers the question of what the hell did you do last night?

I asked my fashion consultant/BFF Ben for his style advice: “not to like… over politicise hickies, but to have one in a covid landscape is a blatant fuck you to the rules. It’s literally a flag you have germs on your neck. It’s hot.”

My friend Jack is prepared to put his body on the line for the greater good of society, too.

“In my mind our aversion to hickies is like being grossed out by PDA, or by extension protesting against people for wearing bikinis. Let’s break these prudish walls down for fucks sake. Hickies are just another rung on the climb to complete sexual liberation & I for one am ready to get my soul sucked out for my children’s freedom.”

Still, the question arises as it always does: intention versus impact. When it comes to hickeys, the consensus is that they should be a byproduct of a good time as opposed to the end goal. Any intentional branding, marking of territories or metaphorical pissing on your romantic partner reeks of insecurity. It’s why the hickey, given (or received) in high school, is responsible for most of the bad PR surrounding it.

Everyone has been burnt by a hickey. A personal stand out experience; a beachside family holiday with my high school boyfriend who bequeathed me a purple branding the size of a tennis ball mere hours in. When confronted, I told my mother I had walked into a wall. Logistics and lying are clearly not my forte.

Are the people brave enough to bounce back from the overenthusiastic lovebites of our pubescent years and adopt? I took to the streets (Instagram) to see what the people think of the humble hickey.

Cat, 25: Chic until you have to return to the office.

Joel, 25: Time spent giving a hickey is time that could’ve been given to oral.

Claude, 23: I love a cute little one, not visible for zoom meetings though.

Chile, 23: ​​I think HOT in hidden places and trashy+++ in public spots. If someone gives me a hickey on the neck (intentionally) it gives me the ick.

Grace, 27: I once wrote a really sad (but probably now funny) poem about a boy who WOULDN’T give me a hickey.

Aaron, 28: Etiquette provides that hickeys are an acceptable accessory, but only between Anzac Day & Labour Day (where weather would permit the wearing of scarves or turtleneck sweaters).

Shannen, 28: Honestly, I would LIVE for the attention. To the point I’d actually ask someone I’m into to give me one.

Anusha, 22: It’s the blueish hickey that peaks through the concealer which was such a look in high school. I remember purposely wearing my hair in a high pony to let it peek through haha. Walking into school on a monday with a hickey was like this mark that you had a goood weekend.

Joey, 26: Both smoking and hickeys are unfortunately always hot and that’s just my two cents.

Sure, it’s not a unanimous yes – but it’s a pretty positive general sentiment.

I think there’s a time and place. A hickey wouldn’t be the look I pull to a Monday morning meeting, but rocking up to a party with a postcard from a more promiscuous place? Hot.

Time to find a willing partner or boot up your Dyson. Let’s break some blood vessels.