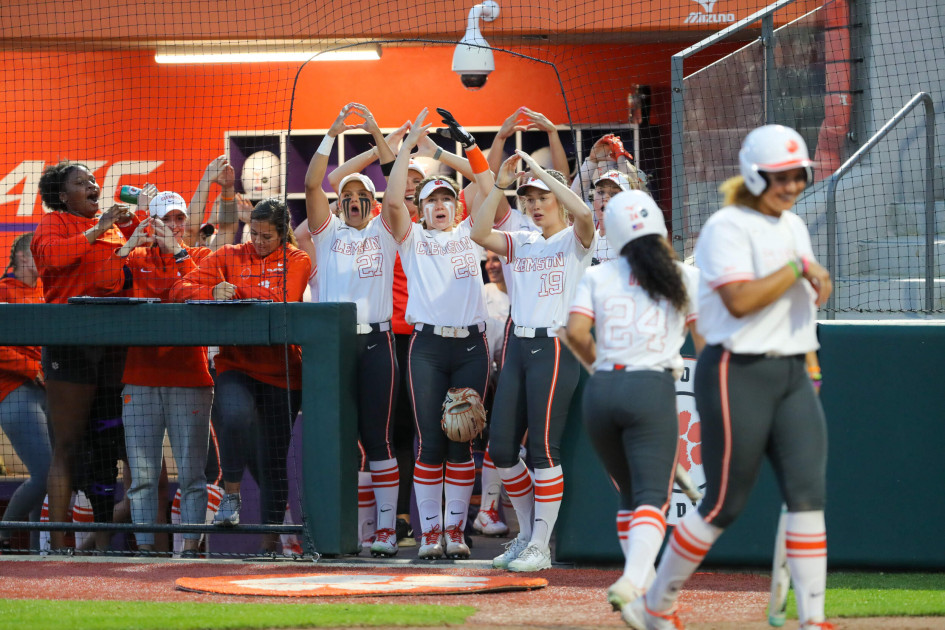 CLEMSON, S.C. – The No. 18/16 Clemson softball team sped past South Carolina in the first Palmetto State game at McWhorter Stadium with an 8-1 victory. The Tigers’ offense proved strong, scoring five runs in the first inning and eight runs total on seven hits. With the win, Clemson improves to 22-10 (3-6 ACC) on the season while the Gamecocks fall to 18-14 (2-7 SEC).

Valerie Cagle, Alia Logoleo and McKenzie Clark led the charge for the Tigers at the plate as each recorded a home run. Clark had a night going 3-for-4 with two runs scored.

The Tigers wasted no time and got the offense going early in the first after Cammy Pereira drew a leadoff walk followed by Clark hitting a double into left center to put runners on second and third. Cagle stepped to the plate and drove a full-count pitch out of left center to put Clemson ahead 3-0.

The momentum didn’t stop there for the Tigers as Kyah Keller was hit by a pitch with two outs and advanced to second as Aby Vieira hit a single into left field forcing South Carolina to go to the bullpen early. With two outs, Logoleo reached on a fielding error by the Gamecocks’ second baseman that allowed Clemson’s fourth run to cross the plate. Freshman Maddie Moore followed with a single of her own to bring home Vieira to move Clemson’s lead to 5-0 after one.

The Tigers kept rolling into the second inning with Marissa Guimbarda, who was replaced by pinch runner Arielle Oda, drawing a one-out walk. Oda quickly stole second to move into scoring position for Sam Russ to bring her home in the next at bat extending Clemson’s lead to six.

South Carolina got one run back in the top of the third after a runner got on and came home on a wild pitch.

Logoleo hit her fifth home run of season in the bottom of the fifth inning to push the Tigers’ lead up by six runs. Clark followed that in the sixth with a no-doubter out of left to bring the score to 8-1 in favor of the Tigers, which would hold for the remainder of the game.

Valerie Cagle went the distance in the circle, totaling 98 pitches, 71 strikes, on the day. Cagle rang up 11 batters and registered no walks.

Cagle went the distance in the circle, totaling 98 pitches, 71 strikes, on the day. The redshirt sophomore rang up 11 batters and registered no walks on her way to securing her ninth win on the year.

The Tigers hit the road for a three-game series at North Carolina beginning on Friday, April 1 in Chapel Hill. Friday’s game will be broadcast on ACCNX with first pitch scheduled for 6 p.m.