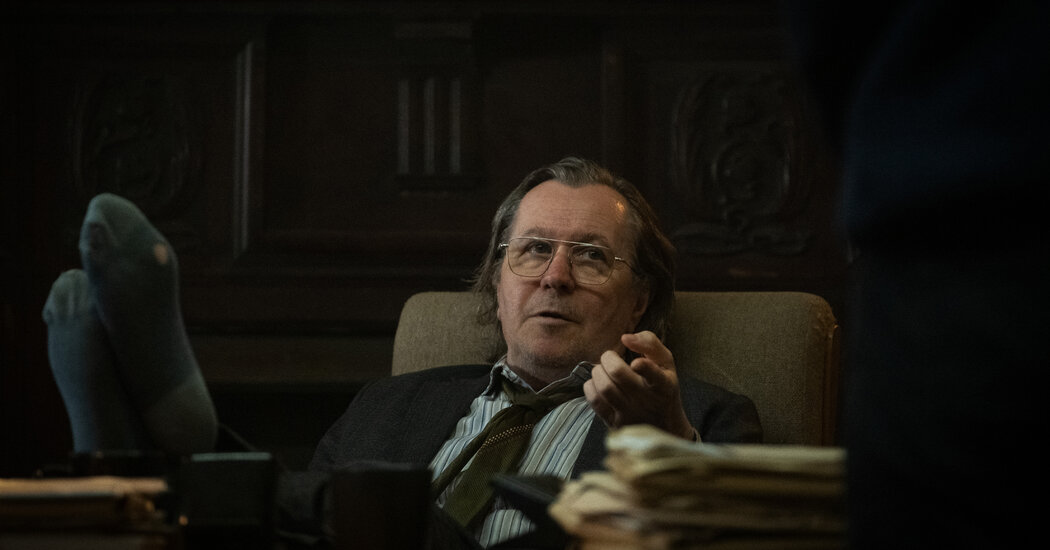 The show around Oldman is not entirely up to the standards set by his performance, but it’s not too far off — “Slow Horses” is a highly satisfying celebration and sendup of the John le Carré novels that clearly inspired it. It’s a complicated conspiracy thriller crossed with an office comedy, and it lightly dusts grungy realism with off-kilter, absurdist touches that only occasionally misfire. It also showcases a great cast — Oldman is joined by, among others, Kristin Scott Thomas as MI5’s steely head of operations, Jonathan Pryce as a retired spymaster and Jack Lowden as a young agent recently arrived at Slough House, and they’re all fantastic.

If there’s a problem with the show, it’s the inverse of what’s sometimes referred to as Netflix bloat. “Slow Horses” demonstrates that six episodes — a standard length for British crime dramas — isn’t necessarily enough time to adapt a complexly plotted, fully characterized book. The show is more faithful to Herron’s novel than you might expect, with the result that the turns in the story can seem arbitrary and be hard to follow.

The show begins with a breathless action sequence now set at London’s Stansted Airport — a nine-minute scene full of earbud commands, sprinting, yelling, tackling and escalator misbehavior. (The unspoken joke in the book is that nothing nearly as invigorating, or as tritely cinematic, happens again; several subsequent chases have been added in the series, a bit of audience pandering that reads as a failure of imagination.)

The fallout from that scene is what brings Lowden’s River Cartwright, who is rash, idealistic and actually highly capable, to Slough House, where he’s surrounded by other disgraced agents who are more or less resigned to being sidelined. He chafes against his demotion, which he believes was undeserved, and against Lamb’s put-downs; when an assignment to go through a journalist’s garbage appears to be connected to a hostage crisis, he disobeys Lamb’s orders and investigates, eventually pulling the rest of the Slough House crew with him.

As directed by James Hawes and mostly written by Will Smith, who worked on the Armando Iannucci political satires “Veep” and “The Thick of It,” it’s an enjoyable, acidic but low-key ride through the night streets and dull days of London. It’s focused as much on pub dates, office gripe sessions and desultory stakeout conversations as on tradecraft, and every line of dialogue threatens to turn into a creative insult or a bitter joke. (A favorite: “Bringing you up to speed is like trying to explain Norway to a dog.”)