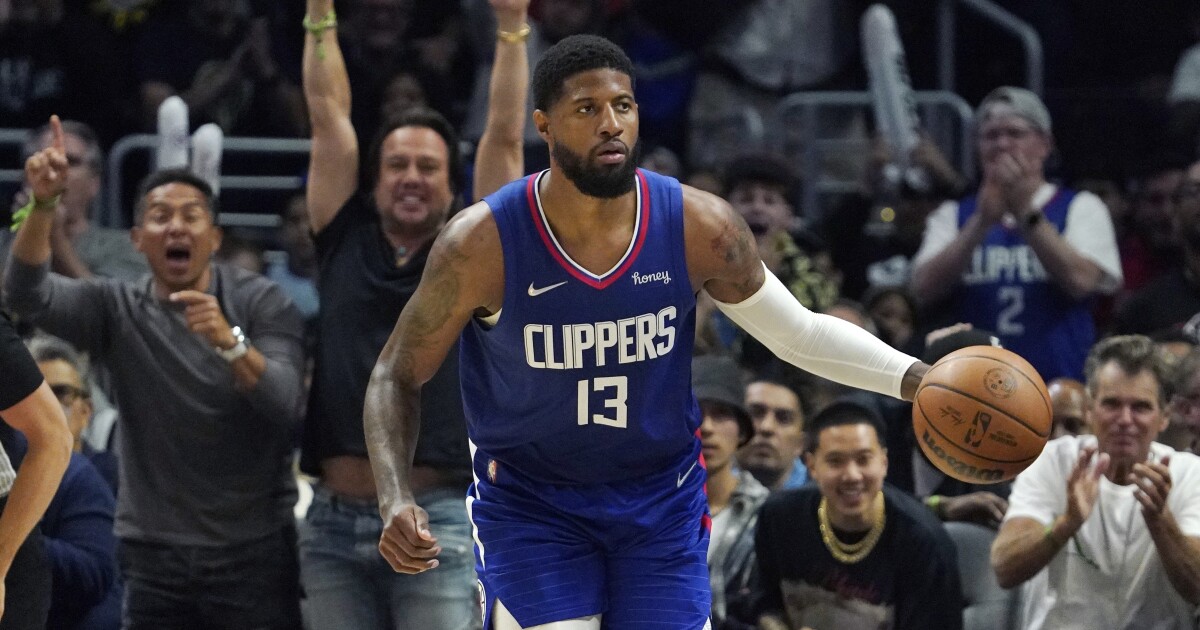 It was just one game.

It was also a telling one.

After missing his 43 previous games with an elbow injury, Paul George’s 34 points and harassing defense in Tuesday’s comeback to beat the Utah Jazz offered enough during his 31 minutes to draw a glimpse into how his return changes the Clippers and how the Clippers must adjust to George’s presence in the lineup to meet their playoff potential, two scouts for NBA teams said.

One scout felt George showed less rust than expected and while turning a slow start into a furious finish looked even better than when he had last played, in December.

George missed his first three shots and threw two turnovers in the first quarter while matching his conditioning to NBA speed, but the adjustment was quick. He scored 25 of his points after the Clippers had fallen behind by 25 in the third quarter, including a pair of three-pointers in front of the Clippers’ bench less than 30 seconds apart in the third quarter that signaled to coach Tyronn Lue that George was fully back.

George’s eight deflections, which led to four steals, also matched Utah’s entire total, and his two turnovers were half of his season average.

Initially concerned by George’s explosiveness after missed layups early, the scout described leaving impressed by how fluidly George played as the game went on and also with his sense of timing. George’s ability to get his hands on the ball helped neutralize Jazz guard Donovan Mitchell in their matchups.

“George looked good,” said a second scout, who like the other spoke on the condition of anonymity because they were not authorized to speak publicly.

George’s 20-point third quarter showed why the Clippers were eager to run their offense through him again. The comeback coincided with George looking more comfortable using pick-and-rolls with centers Ivica Zubac and Isaiah Hartenstein and playing off the ball, flying around screens for handoffs to give him momentum and space between his defenders.

And the attention George drew from Utah’s defense also led to open shots such as Luke Kennard’s assisted three, off of a George drive, to take a two-point Clippers lead with 66 seconds left. With the play-in tournament looming, George provides “a closer, or at least someone outside of Reggie Jackson that can create their own shot consistently,” the second scout said.

Lue built his offense for the expressed purpose of maximizing George and Kawhi Leonard, but with both absent because of injury for long stretches and the rest of the roster in flux at times, Lue had to dramatically pare down and simplify what is called this season. Tuesday began the “adjustment period,” Lue said, of reintegrating such a high-usage player into the lineup. Two days of practice with George preceding Tuesday’s return proved to Lue that his teammates could do just that, saying teammates knew exactly where to be based on their experience playing with George for parts of multiple seasons, but as expected, it wasn’t flawless.

“I think it took the first half for everyone to get familiar with each other again,” the second scout said. “At times I think PG holds the ball and isolates too much” — which is the opposite of how the Clippers played before the All-Star break, the scout added.

Lue acknowledged that he’d apologized to forward Marcus Morris Sr. — one of the Clippers who shouldered much of the offensive burden amid George’s absence — for not doing a better job finding ways to keep him involved on a night Morris made one of his six shots.

For a team that survived in George’s absence on the strength of a system that, at its best, moved the ball, George’s ability to create his own shots — particularly off the dribble when the offense bogs down, a bonus for the postseason, when the game is played much more in the half court — is a potent offense unto itself but can also lead to stagnation. That balance will take getting used to again, but the first scout called the transition far smoother than expected after one game.

“PG’s first game back, everybody looking for PG, PG’s excited and we just kind of played through him, so I got to do a better job with Marcus just making sure he’s in the rhythm of the game,” Lue said.

The Clippers have six games and slightly less than two weeks left in the regular season to capture that rhythm if they hope to advance out of the play-in round. The first scout expressed confidence the Clippers would get through the play-in tournament into the first round but also reservations picking them to advance out of a seven-game series against either top-seeded Phoenix or second-seeded Memphis, believing the Clippers still don’t have enough to counter the top seeds’ matchup advantages.

That belief rested on the roster’s current constitution with George back but guard Norman Powell and Leonard yet to make their own returns. The Clippers are hopeful Powell can return to team workouts in the next week to 10 days. No update has been offered on Leonard, but he has not been ruled out.

Yet George, who is available to play Thursday in Chicago, offers just one more option for Lue to test as the regular season closes. That’s a dangerous prospect, some feel.

“The in-game adjustments and what he does is, I’ve never seen something like that in the time I’ve been in the NBA,” Hartenstein said of Lue. The second scout agreed, calling Lue “a genius at adjustments.”

Update: One of the surprises early in the season, Chicago (44-32) is 6-11 since the All-Star break and has the league’s fifth-worst scoring margin, outscored by 5.6 points per game, while dealing with long-term injuries to two of its best perimeter defenders in Alex Caruso and Lonzo Ball. Guard Zach LaVine is probable to play with left knee soreness. DeMar DeRozan ranks seventh in the NBA with 27.7 points per game. For the Clippers, rookie Brandon Boston Jr. remains out with a non-COVID-related illness.