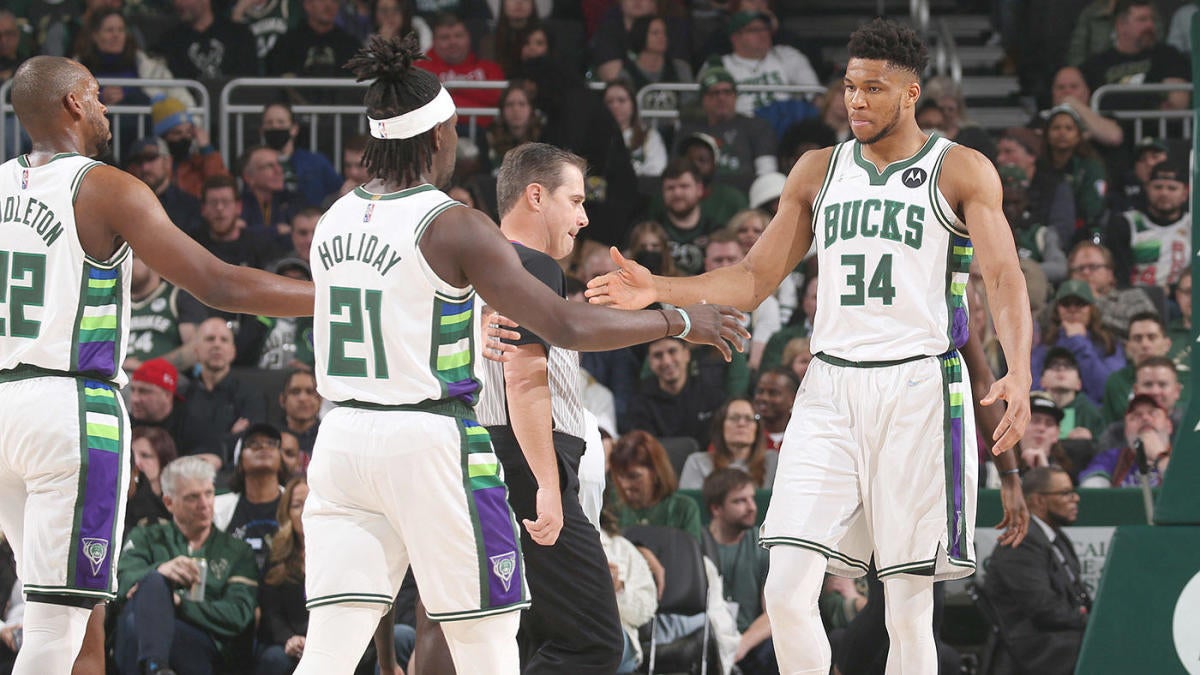 In an NBA season crowded with a surprising number of legitimate title contenders, it’s the Milwaukee Bucks who have the secret weapon: An utter and total lack of drama.

No clear personality clashes. No more injury question marks hovering overhead. No bottled-up history of postseason futility and failure. No vaccine-or-not backstory. None of the behind-the-scenes and hard-to-judge intangibles that can shape — and shipwreck — championship aspirations.

On Tuesday night in Philadelphia, the juxtaposition between the Philadelphia 76ers and the Bucks was on clear display. Bill Parcells liked to say that people tell you who they are, so you should listen.

Well, Philly and Milwaukee were talking quite clearly.

The Bucks won a close, big game as Giannis Antetokounmpo took over for huge stretches behind his 40-14-6 night of domination. His block on Joel Embiid’s would-be, game-tying shot was an exclamation point of the Greek Freak’s individual excellence — the kind that can carry a team, sure, but that also masks the unity, togetherness and depth driving the defending champions.

He’s right. Giannis, Khris Middleton and Jrue Holiday — who combined in the win for 80-31-23 — are woefully underrated as a trio.

But it’s also the continuity and chemistry of the Big 3, the focus on basketball, the culture — the No Damn Drama of it all — that gives the Bucks a real boost.

Years ago, an NBA general manager boldly predicted to me in March that one of the league’s then-best teams would inevitably implode in shocking, headline-grabbing fashion by May. It seemed like a silly analysis. This team had three stars, the NBA’s best offense, a championship head coach, and soon the Western Conference’s second-best record.

So when that Los Angeles Clippers team, in the second round of the 2015 NBA Playoffs, blew a 3-1 series lead against the Houston Rockets, I called the guy back with a follow-up question.

How the hell, I wanted to know, had he called that one?

His answer, boiled down to a digestible chunk, was this: Too much drama.

It turned out Chris Paul and DeAndre Jordan weren’t exactly the best of friends. That Blake Griffin was in the middle of it all. That head coach Doc Rivers didn’t have his arms around a locker room raft with rifts. That the practice floor was often a place of misery. And that talent — this was an eye opener — sometimes shrinks in the presence of toxic truths that can be hard to see from the outside.

This season, there are seven teams with at least 12-1 odds to win an NBA championship. That list does not include a Memphis Grizzlies team with a top five offensive and defensive rating, historically a very good sign for would-be contenders.

Those odds also leave out the Utah Jazz and Denver Nuggets, both unlikely but interesting long shots.

The teams that are contenders, though, are rife with the kind of drama, angst or injuries that can make it very, very difficult to win four consecutive seven-game series.

Let’s take them in order.

The Phoenix Suns are the favorites to win it all, and they have the least question marks of any of the true contenders outside of Milwaukee. Paul returned to action last week after missing 15 games with an injury.

But CP3, talented as he is, has had over his career a track record of the kind of behind-the-scenes drama that has derailed teams, including that Clippers squad from 2015. In Phoenix, he seems to have shed those problems of the past — be they the wrong teammates or his own issues, or both — but his track record alone offers pause.

Phoenix came close last year, and getting back to the Finals and finishing the job this time around will largely hinge on his health and leadership and the very real pressure that Paul’s career is nearer its end than its beginning.

Next up are the Brooklyn Nets. There’s not enough time to get into all of it, but clearly, this underperforming-but-still-dangerous team has more drama than a middle school dance. The vaccination circus, the James Harden trade, Ben Simmons’ continued absence and Irving’s well-documented talent-vs.-melodrama conundrum all weigh on the scales.

Vegas favors them as roughly the second-most likely team to win it all, despite their current spot in the 9-10 play-in scenario, and as the favorites in the Eastern Conference. But I’d rather burn that money and use the ashes at parties as a conversation starter.

The Golden State Warriors are waiting on Steph Curry’s return from injury — and for Draymond Green to return to form after injury. And in the drama-as-a-hurdle argument, it is worth noting that the Warriors largely lost their own 3-1 series lead, this one in the NBA Finals, when Green missed a game because he took a shot at LeBron James’ — well, where he shouldn’t have.

The Sixers are a basketball basketcase of past postseason letdowns — see, James Harden, see, Doc Rivers. And as if to prove that, yes, behind-the-scenes rumblings can indeed hide in plain sight, Embiid came out after Tuesday’s loss to the Bucks and explicitly criticized the coaching staff.

Emotions always run high, and there is a spectrum of worry for all these teams running from DramaDefCon 1 (the Nets) to historical likelihood of implosion (76ers) to injury drama that may or may not have a real impact (Warriors and Celtics).

But Thursday night, when the Bucks take on the Nets, you’ll have two very different models for talented teams with huge expectations.

Come the playoffs, you can have the underperforming, headline-grabbing, look-at-me insisting Brooklyn Nets.

The best bet, as always, is the team with the thing that never gets the attention and focus it deserves: a strong, unified, hard-to-gossip-about, top-class culture.