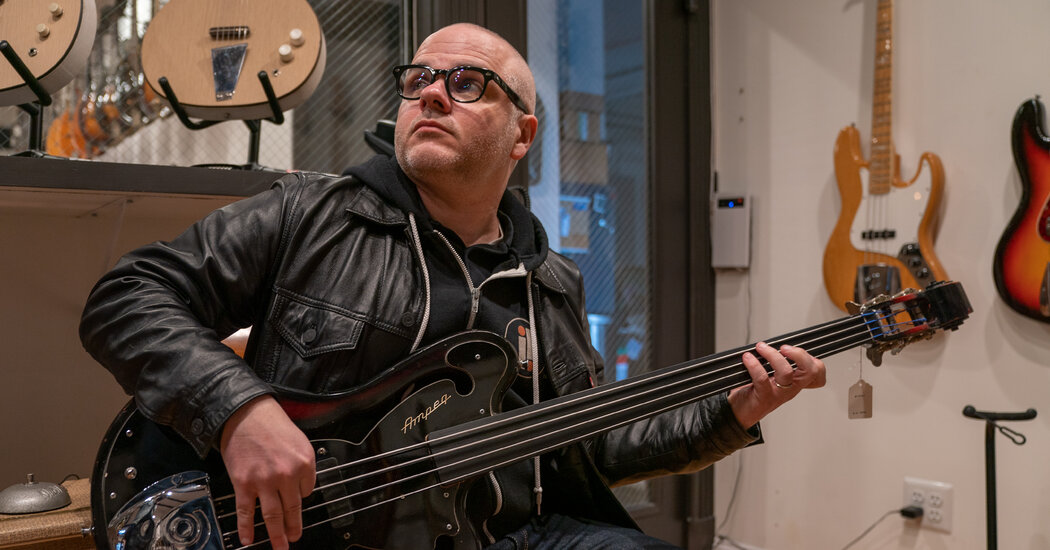 Verve Label Group, which includes American jazz, classical and other eclectic labels, racked up 21 Grammy Award nominations this year (Jon Batiste, a contender in the record of the year and album of the year categories, was responsible for 11 of them).

For Sunday’s awards ceremony, Jamie Krents, the company’s executive vice president, will be in Las Vegas. But most Sundays Mr. Krents, 46, who used to play bass for the band French Kicks, can be found in Brooklyn with his wife, Lisa Ventry, 46, a preschool admissions consultant; their son, Charlie, 11; and the family’s rescue dog, Millie. He can’t say for sure what part of Brooklyn the family lives in. “Depending on who your broker is, it’s either Gowanus or Park Slope,” he said.

PERMANENT JET LAG Well, I wake up early, usually between 6 and 7. They’re not very rock ’n’ roll hours. But years of international travel have given me permanent jet lag. The first hour or two of a Sunday is dealing with lingering emails from the workweek and then catching up a bit on some newspaper reading. If I don’t do it then, it’s not going to happen.

TURTLE’S PACE I try to run in Prospect Park. I run very slowly, because I’m not a runner. I’m someone who forces myself to do it. I used to play a lot of basketball, but those days are over, so now I do this. People wonder if I’m OK at my turtle’s pace. Sometimes I’ll listen to the basketball podcast “Knuckleheads,” or sometimes I have stuff for work I need to listen to that could be demos or potential signings or mixes and masters of upcoming releases. I have to make sure I feel good about those.

ALL DOWNHILL Often I’ll grab coffee and a smoothie or something to eat on my way back. I’m 90 percent vegan. Cookies with butter and the occasional egg make this the truth. I stopped eating meat when I was 17. I didn’t start drinking coffee till I was 36, and I’m basically a fake coffee drinker: I get lattes from Starbucks or a place called Hungry Ghost. The key is, it’s all downhill at that point, down the slope to our place by the Gowanus Canal, because I’ve suffered enough from running. Why did I start drinking coffee at 36? I think it was the exhaustion of having a newborn. It’s funny, I was able to be a functioning touring musician despite the jet lag, but the thing that finally nailed me was having a baby. I blame my son for this.

NEIGHBORLY GESTURE I usually take a shower, and then I try to practice bass. I try not to do it too early, because my neighbors are nice, tolerant people and one of the great nightmares of living in Brooklyn is having a bass player move in next door to you. So I try to do it at humane times. I’ll either practice on my own, or my son and I will play. He started playing guitar, and he loves to play punk rock and classic rock stuff. He loves Richard Hell. He loves to play Iggy Pop, the heavier stuff.

DECLUTTERING We’ve been trying to get rid of stuff. There’s been a lot of cleaning and purging. We spent some time living in a house in D.C. during the pandemic, so when we moved back to Brooklyn, the walls were closing in. It felt a little small and congested. So in an effort to stay married, I’ve been throwing away old shoes and old jackets and old books. Sometimes we put them out on the front steps. People tend to grab them.

BASSES OR BALLS I often go to the Retrofret guitar shop in Williamsburg in the afternoon. I collect vintage basses. I have a ton of them, to my wife’s horror. If it’s a day for a warmer weather activity, I’ll sneak across the street to shoot some baskets at J.J. Byrne Playground. I try to work on maintaining my mediocre jump shot. They also have a good skateboarding ramp that Charlie likes.

IN DEEP The later afternoon is for deeper listening. Kurt Vile has a record that’s coming out this year that I’m excited about. That’s a great example of something I’ve been listening to the last few weeks. I also get a lot of music sent to me unsolicited. I try to listen. You never know.

FAMILY DINNER Then it’s usually creeping up toward dinnertime. Whole Foods is a block away; that’s where we buy a lot of our food, so my son won’t be able to go to college. My wife is a great cook. She’ll make something or we’ll go to a local place like Song, which has really good Thai food. We always eat dinner together on Sunday, for sure.

NIGHTLY GAG I go to bed early, 10 at the latest, because I deal with international markets for music stuff early in the morning and because I’m old. It’s not what it used to be when I was playing a lot of gigs, but it works. I try to read before bed. I’m now reading Marc Myers’s oral history about the evolution of the rock concert. But basically it’s a joke arrangement I have with myself where I open a book, knowing I’m not going to get two pages in before falling asleep.