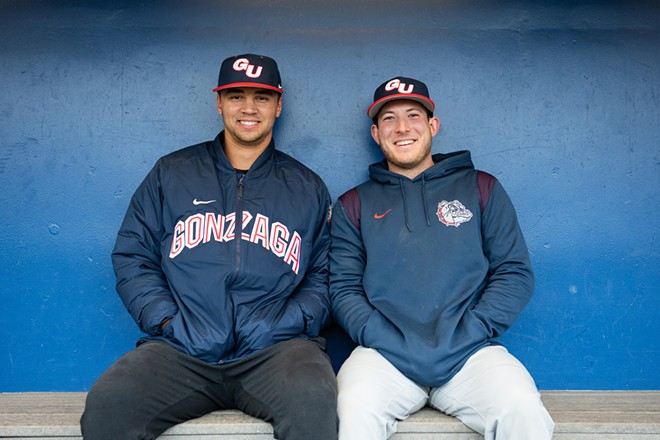 Once again, Gonzaga scheduled a brutal nonconference slate. Sure, they didn’t run through the early season unblemished, but they still picked up more huge wins than losses and showcased once again that they belong among the elite programs in the country. And they’ve got the national ranking to prove it. Yet some naysayers still dismiss the program hailing from a tiny Jesuit school in Spokane.

What’s that? You’re sick of this Gonzaga basketball story you’ve heard a million times? Well that’s good, because we’re not talking about Zags hoops here. Their season is over.

The college baseball season has been underway since February, but it’s understandable if it’s totally off the radar for local sports fans. Because of Spokane’s chilly weather, Gonzaga baseball always has to start the season playing a plethora of road games against teams in warmer climates. But the Zags finally get to play their first home series of the year — after a one-off weekday matinee home opener against Oregon last week — when the Pepperdine Waves come to town April 1-3. For baseball fans impatiently waiting for the labor-negotiations-delayed opening day for Major League Baseball, the Bulldogs are here to fill that stitched-seamed hole in your heart.

And there’s a chance this is the best baseball team in GU history.

Before playing their first home game, Gonzaga amassed an impressive 14-4 record (the team is currently 16-6, ranked No. 17 in Baseball America’s College Top 25). And despite a roster boasting 18 new players, that record didn’t come against a creampuff schedule. The victories included road wins against Missouri and Cal, a sweep of Cal State Fullerton, and, most impressively, a sweep of Oklahoma State (ranked No. 4 at the time of the series).

“I think [we show] up with the idea that we could beat anyone, anywhere, with any pitcher on the mound,” says Gonzaga pitching ace Gabriel Hughes. “Going into Oklahoma State, it was kind of a series that we were expected to lose. And we go in there, sweep them at their place. And after that, it kind of became like, ‘OK, who can’t we beat?'”

GET OUT TO
THE BALLGAME

The cost of seeing the Bulldogs on the diamond is a steal.

There’s no debating the key to the Bulldogs’ early season success — the team’s pitching staff. Led by Hughes (who doubles as the team’s best pro prospect, No. 31 on Prospects1500‘s list of “Top 100 NCAA Division I Prospects”), Zags pitching has been lights out during nonconference. The squad boasts a stellar team ERA of 3.96, with the Friday/Saturday/Sunday starter combo of Hughes, William Kempner and Trystan Vrieling being a truly formidable three-headed monster. (In addition to the ping of metal bats, one thing that differentiates college baseball is that pitching staffs are structured around weekend series — with the Friday starter usually being the ace, Saturday starter being the second best arm, etc.) They’re an aggressive bunch on the mound.

“The thing I like the most is just the challenge mentality that [the pitchers] all have,” says catcher/designated hitter Stephen Lund, the lone Bulldog position player to make the Preseason All-WCC Team. “They never shy away from anything, and they’re always looking to challenge, which is really awesome as a catcher.”

“[The starting pitchers have] been outstanding. And they’ve kept us in games, while we had a chance to figure out some of these issues offensively,” says GU head coach Mark Machtolf, in his 19th season.

Gonzaga’s offense is, admittedly, more of a work in progress. With so many fresh faces, it’s been hard to develop a consistent offensive rhythm against the prime-time arms they’ve faced in nonconference. The team also isn’t exactly loaded with power bats, only mashing one home run in their first nine games.

So how has Gonzaga kept up the winning ways? They grind. It’s stringing together a few singles, working the strike counts, taking walks and employing sacrifices advantageously. If you’re the type of baseball fan that bemoans modern big-league baseball just being about home runs or strikeouts, these Zags are for you.

“As a team, we always have a philosophy of being an efficient offense,” Lund says. “In our mind, hitting a sac fly with a guy on third is just like hitting a solo home run. It is just as valuable. It still counts for one run. And we’re all celebrated, just the same.”

The Oregon Ducks tagged a loss on the Zags in their home opener.

After months on the road, the Zags opened the home season against Oregon on a cold gray Tuesday afternoon in late March. While GU boasts one of the best staffs in baseball, it was actually everyday third baseman (and one of the team’s best bats) Cade McGee on the mound. It wasn’t an easy outing for McGee, giving up three earned runs to the high-powered Ducks over 3.1 innings, but he did flash a little Shohei Ohtani by blasting a home run later in the game. And typical of this Gonzaga team, despite falling behind 8-2 by the 4th inning, they just kept grinding and even had the bases loaded down four runs in the bottom of the ninth before ultimately coming up short and losing 9-5.

It was a disappointing start to the home slate in Spokane, but with 14 more home games on the schedule, there’s plenty of time to get on a roll at home. The players are certainly happy to be back in the Inland Northwest.

“Love traveling. Love seeing a lot of different parts of the country. Love seeing the sun go down in California. But it’s gonna be nice to take a breath, kind of take a step back and get into a rhythm,” Hughes says.

With eyes on another West Coast Conference title and a breakthrough appearance in the College World Series, this year’s Gonzaga baseball team understands they have a chance to make a statement both to Spokanites who overlook them and the national sports audience that only views Gonzaga as a hoops factory. These Zags are ready to emerge from the substantial shadow that the basketball team casts.

“Yeah, definitely as a team we kind of have that as a little edge,” says Lund. “We know we can play, and we’re also nationally ranked. It’s one of our unwritten kind of goals — we’re trying to also put Gonzaga baseball on the map. We just want to show the country what we can do. [So that] everybody kind of realizes, ‘Oh, wow … It’s more than just a basketball school.'” ♦