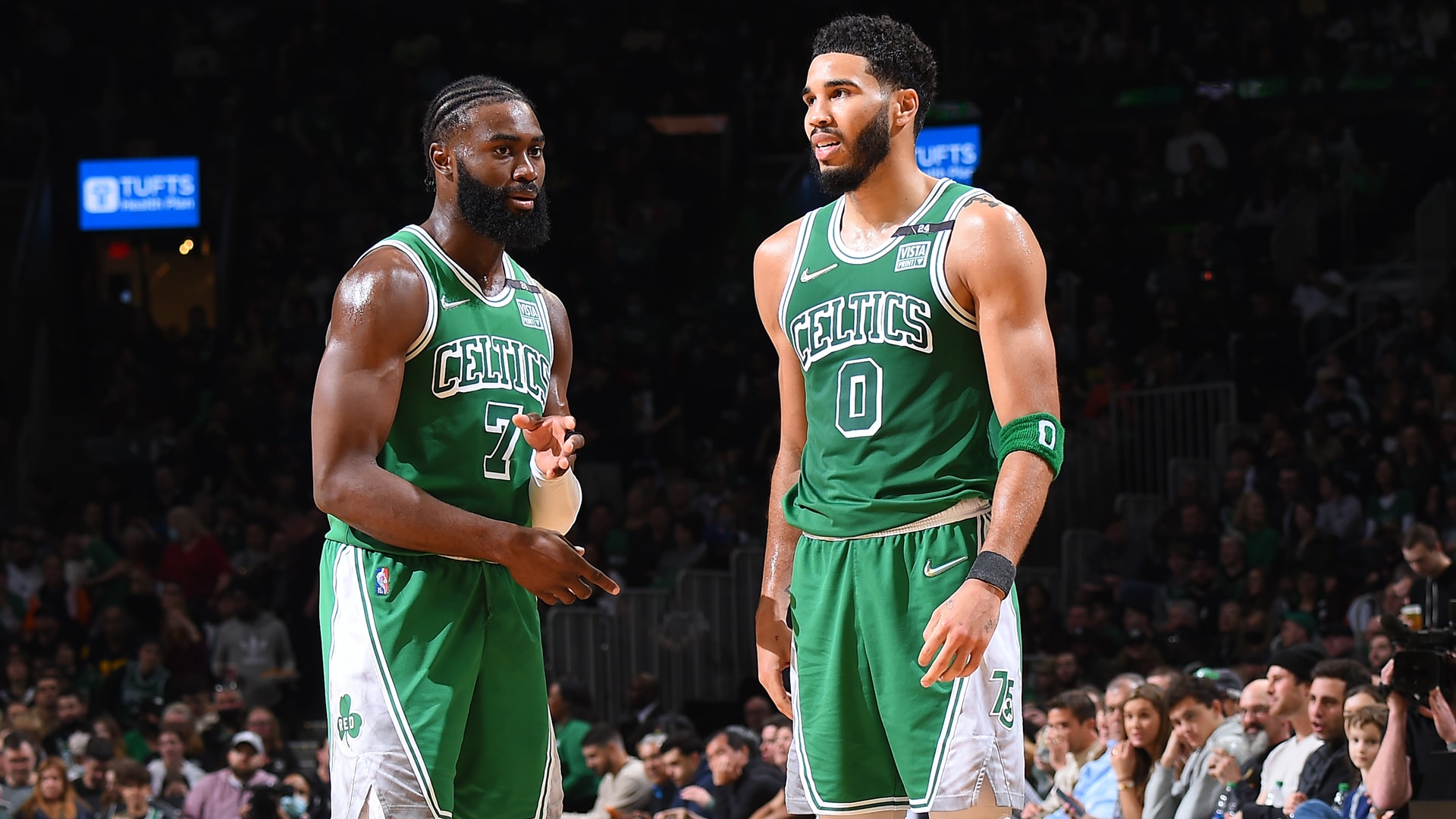 Jaylen Brown and Jayson Tatum continue to lead Boston to success this season.

BOSTON — When the Celtics slumped off the Madison Square Garden court following a buzzer-beating loss to the New York Knicks on Jan. 6, they were a team without direction.

The setback dropped the Celtics to 18-21 and into 11th place in the Eastern Conference. It also came on a night in which they had given up a 25-point lead – the fifth time since the start of the season they had surrendered an advantage of 19 or more points.

It felt like the preamble to a lost year following the franchise’s offseason makeover that included a transition from Brad Stevens to rookie head coach Ime Udoka.

It turns out, that game may have been the inflection point the Celtics needed to turn things around.

Buoyed by the offensive production of Jayson Tatum and Jaylen Brown, as well as a defense that rates as the best in the NBA during that stretch, Boston is suddenly one of the league’s hottest teams with the playoffs just three weeks away.

Since their humbling loss in New York, the Celtics (47-29) have gone an East-best 29-8, are up to fourth place in the East and suddenly in position to compete for the conference’s top seed.

Jayson Tatum ties Larry Bird for most 50-point games in Celtics history as his 54 points put Boston past the Brooklyn Nets.

It’s been a journey. We’ve had to find our identity,” said Tatum, who’s averaging 27.1 points per game and has scored 30 or more points 15 times during the current stretch. “We have lost some teammates, got some new guys. We’ve had to battle, but it’s been fun. Even some tougher times, looking back I think we benefitted from it, and it made us better along the way.”

The resurgence also came amid not only technical adjustments on the court but following some bold moves by Stevens in his new role as the team’s president of basketball operations.

With his team finally finding some traction and in the midst of a 13-4 stretch after the New York loss, Stevens still shook up the roster at the trade deadline, dealing seven players, including guards Dennis Schröder, Josh Richardson and big man Enes Freedom, along with a 2022 first-round pick, and netting the Celtics guard Derrick White and center Daniel Theis.

The moves helped get them under the luxury tax threshold and cleared up some chemistry issues that were apparent early in the season.

A team that also had trouble sharing the ball is now assisting on 60 percent of its field goals, ranking 14th in the league. Last season, Boston ranked 27th in the same category.

“The unselfishness is there,” Udoka said. “It’s becoming contagious.”

Brown said it’s the culmination of the patience everyone in the locker room has had to allow things to come together.

“Everything takes time,” Brown said. “Everybody wants everything to work right away. But new team, new coaching staff, just kind of working through some things and trying to figure some things out. Watching a lot of film and making so we can believe in ourselves and stuff like that. A lot of adversity early in the season. I missed 15 games. COVID. There was a lot of things going on. And now, we’ve kind of got our feet under us. Things are going a lot better for us.”

They’ll have to lean on that new foundation after getting hit with a fresh dose of adversity after big man Robert Williams suffered torn cartilage in his left knee during the team’s win over Minnesota on Sunday.

The injury will require surgery, keeping him out for the rest of the regular season and likely well into the playoffs.

It will require more production from veteran Al Horford, as well as third-year forward Grant Williams and Theis.

Point guard Marcus Smart said it’s a challenge they are ready to confront.

“I think with us, the advantage that we have with that is we went through 30-something games without our full roster,” he said. “We had to learn to adjust and play like that. (Williams’ injury) definitely is a hit to us, but we know Rob wouldn’t want us to hold our heads. And we’re not going to do that.

“We still have other guys who’ve been waiting for their turn to step up if that’s the case. And that’s just what it is. We’ve had the advantage to be able to adjust and play without certain guys and it’s just one of those moments where we have to do it again.”