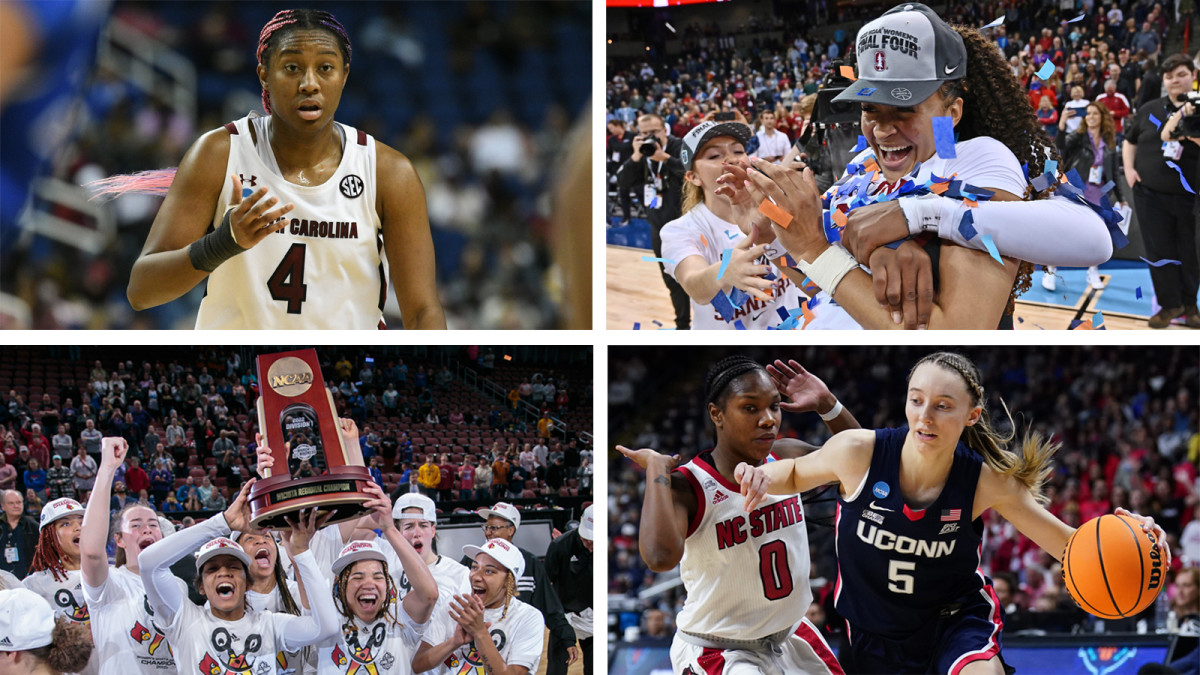 First Thoughts on the Final Four

Stanford coach Tara VanDerveer has instructed junior guard Haley Jones a lot over the her first three seasons with the Cardinal. So it was only fitting that over the weekend, Jones elected to return the favor. Playing the role of Dance Teacher Jones, the Pac-12 Player of the Year, with help from fifth-year guard Jordan Hamilton and freshman forward Kiki Iriafen, taught VanDerveer the “Electric Slide” in preparation for a celebratory performance after their Elite Eight matchup with Texas.

“She was very receptive,” Jones said of her coach. “She was great to constructive criticism.”

After one full team rehearsal—making it two practice sessions for VanDerveer—the Cardinal broke out their moves Sunday night. They had reason to celebrate, of course, having punched a ticket to their second consecutive Final Four after defeating the Longhorns, 59–50.

The reigning national champions will face off against UConn on Friday night, while No. 1 overall seed South Carolina will meet Louisville in the other national semifinal. But before any of these teams arrive in Minneapolis, here’s one early thought for each program still vying for a title.

As my colleague Emma Baccellieri wrote Sunday, for at least one night, the Gamecocks quieted the criticism about their offense by putting up 80 points against Creighton. But how effective South Carolina will perform on that end of the floor is still the biggest question pertaining to the Greensboro Region winners. Sunday’s victory marked the first time since Feb. 24 that South Carolina shot 50% or better from the field, and its limitations from behind the arc could pose problems in the Final Four.

It should be noted South Carolina has one of the most dominant players in the country on offense, in likely Player of the Year winner Aliyah Boston, and is No. 6 in HerHoopsStats’ offensive rating metric. But the Gamecocks are 260 out of 356 teams in terms of offensive possessions per 40 minutes and are just inside the top 70 in team field goal percentage. As a result, their margin for error is often slimmer than a usual favorite. Still, Staley said after Sunday’s win that the biggest adjustment her team made entering the Elite Eight was on the defensive end of the floor, not on offense. How those around Boston perform will likely be the difference in their matchup with Louisville.

One of the most impressive aspects of the Cardinal’s 59–50 Elite Eight win over Texas was their ability to outlast their opponent despite playing a style of basketball that the Longhorns wanted. Texas’s ball pressure was disruptive and Stanford committed 20 turnovers as a result of being sped up. “That defense makes you think you might have a layup, and then boom there’s a charge,” Jones said. “It’s very taxing.” And yet, despite being forced out of their comfort zone, the Cardinal still found a way to prevail. That idea has been a common thread for them all season, as they are fully capable of winning games by scoring 90 points (like they did against Kansas in the round of 32) or 59 points (like they did Sunday night). Stanford has also proven that it can withstand foul trouble to key players, like forward Cameron Brink, and have others step up. “We have length at every position,” Jones said. “I think it shows how deep we are and how many weapons we have.” It shouldn’t be a surprise that the reigning champions find themselves back in the Final Four for the second straight year.

After a thrilling double-overtime win over NC State on Monday night, UConn has made the Final Four in 14 consecutive tournaments. In some years, the Huskies have strolled in undefeated, playing with an air of invincibility. This year is not one of the them. Coach Geno Auriemma has trotted out 11 different starting lineups this season, watching as star guard Paige Bueckers, among a laundry list of player absences, missed nearly three months due to a knee injury. It is why after his team’s win Monday night, Auriemma said, “They don’t make it easy, but they make it worth it.” Still, the Huskies do appear to be playing their best basketball of the season at the year’s most important time. Key to their recent success—they haven’t lost since Feb. 9—has been their defense, which has allowed 50 or more points just twice in that span. Their ability to stifle opponents makes them dangerous in it of themselves and a threat to knock off the defending champions. Of course, the play of Bueckers also boosts their odds even further, as does the continued accession of freshman guard Azzi Fudd.

Entering this year’s NCAA tournament it was hard to overlook how Louisville lost two of its final five games heading into March Madness. But the Cardinals are off to the Final Four, their fourth trip to the sport’s biggest stage. While they led by only two with 5:40 to play in their Elite Eight matchup with Michigan, the Cardinals finished the game with a 10–0 run. They allow just 55.2 points per game, with senior forward Emily Engstler being a particular force on that end of the floor. How star sophomore guard Hailey Van Lith performs against the Gamecocks will also go a long way in determining if they can upset the tournament’s No. 1 seed, but Van Lith has been as productive as any player in the Big Dance, scoring at least 20 points in each of the Cardinals’ four victories.

• Paige Bueckers buried shot after shot in UConn’s hard-fought win over NC State. Ben Pickman on the star guard’s stellar performance and the marathon outing that has the Huskies back in the Final Four once again.

• South Carolina heard the comments about its offense and came out firing on all cylinders against Creighton on Sunday. Emma Baccellieri breaks down the Gamecocks’ complete offensive game that has them back in the Final Four.

• While the men’s Final Four will feature all blueblood programs, we won’t forget the No. 15 seed that stole our hearts along the way. Jeremy Woo pens an ode to Saint Peter’s and the history the Peacocks made this March.

On this day 40 years ago, a North Carolina freshman sank the game-winning shot that captured the 1982 men’s national championship, denying Patrick Ewing and Georgetown in the process. You may have heard of him: His name’s Michael Jordan. “I didn’t see it go in. I didn’t look at the ball at all. I just prayed,” Jordan said of the jumper that iced the Tar Heels’ second title, and first since ’57. Four decades later, UNC will go for its seventh this weekend in New Orleans—the same host city as in ’82. Standing in the way this time, of course, is rival Duke.