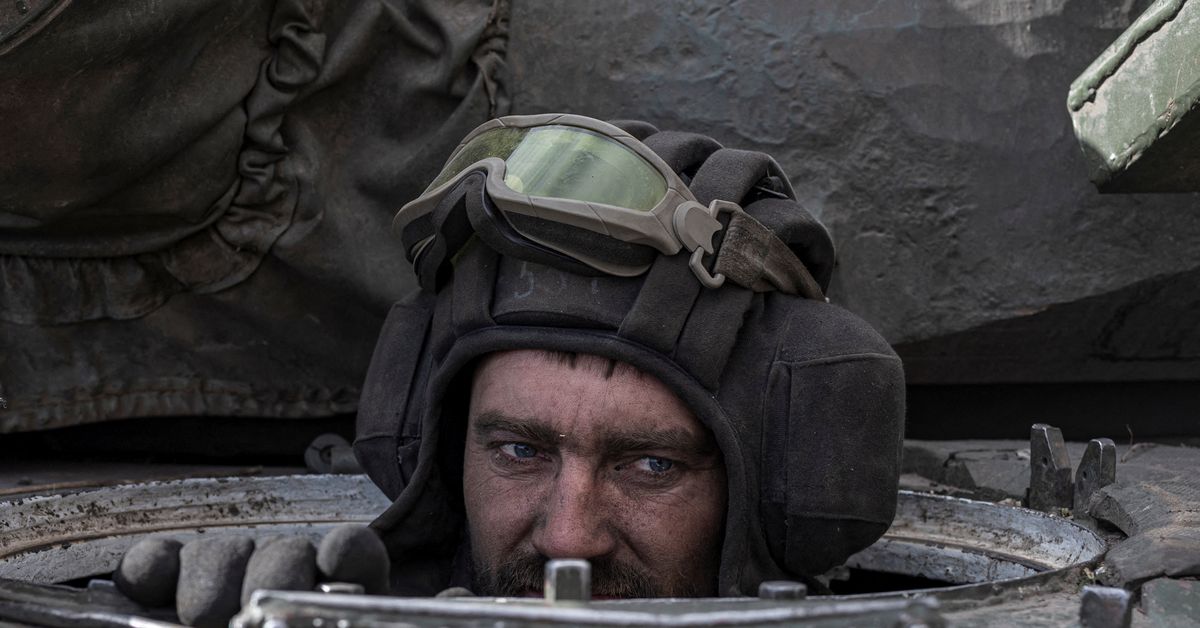 LUKYANIVKA, Ukraine, March 29 (Reuters) – The burnt wreckage of two Russian tanks with blown off turrets and several armoured personnel carriers attest the ferocity of last week’s clashes in Lukyanivka village just outside Kyiv. The charred corpse of a Russian soldier lies in a field nearby.

“There were mortars so strong that it was scary even in the cellar,” local resident Valeriy Hudym told Reuters on Sunday, two days after Ukrainian soldiers seized back control of Lukyanivka in a five-hour battle with the Russians.

“Tanks were firing, artillery, and machine guns. Everything possible was there,” Hudym said. Two Ukrainian soldiers, involved in the battle to retake the village, said the fighting was intense.

More than a month since Russia’s invasion, the defence of Ukraine’s capital Kyiv has played out in heavy clashes in places like Lukyanivka and the nearby town of Brovary to the east, Irpin and Bucha to the northwest and Makariv to the west.

When the histories are written such towns and villages may be minor details, but they are where the Russian advance has been halted, sometimes by small, mobile Ukrainian units wielding anti-tank weapons shipped in from abroad.

Moscow promised at peace talks in Istanbul on Tuesday that it would drastically scale back operations around Kyiv to help the dialogue.

In Lukyanivka, two hours’ drive from the centre of Kyiv, residents recall warning Russian troops who had occupied their settlement to leave while they could.

“I have a neighbour called Svitlana. She told them openly to their face: ‘Guys, go home. You will be killed here’,” Hudym said. Reuters was unable to independently confirm this.

The reversal in Lukyanivka has been repeated in areas around the northern half of the capital, as Ukrainian troops claw back territory lost in the first month of fighting in small battles, without scoring a decisive victory.

The Russian defence ministry did not immediately respond to a request for comment on the military situation around Kyiv.

But the small victories have dealt a psychological blow to a more powerful enemy and shown how nimble units with knowledge of the area can defend lines and even push them back, according to military experts.

They also serve strategic goals – to keep Russian artillery further from the city centre and prevent the invading army from fully encircling Kyiv, the experts said.

Cities including Kharkiv and Mariupol have suffered heavy bombardment as Russian ground advances stalled – part of what the Pentagon and other Western military officials describe as a sign of Russian frustration at the lack of progress.

Kyiv has also been struck by shells and missiles, and at least 264 civilians have been killed according to city authorities. But the scale of devastation, particularly to the city centre, is far smaller, according to witnesses.

Russia describes its actions in Ukraine as a “special operation” with the aim of demilitarising its neighbour. It has denied targeting civilians.

“We knocked out the Russians. The Russians are now being moved a few kilometres away,” said Marat Saifulin, from the Ukrainian “Brotherhood battalion” that took part in recapturing the village in an attack that lasted from noon until dusk.

CIA Director William Burns said in early March that the intention of Russian President Vladimir Putin was to seize Kyiv within two days of the start of the invasion on Feb. 24.

Putin and Russian officials have consistently said that Russia’s military operation in Ukraine has gone according to plan.

However, two early setbacks suggested it would not be plain sailing for an available Russian force estimated by some diplomats before the war at around 190,000 troops. Russia has not given a figure for its deployment in Ukraine.

Russian paratroopers attacked Hostomel airport, a potential bridgehead northwest of Kyiv, on the first day of the invasion. But heavy fighting there slowed the Russian advance toward the capital, according to the Wall Street Journal.

Seen by some Western defence officials as a major threat to Kyiv in the first days of the war, by March 10 it had largely dispersed, with some vehicles spreading into surrounding towns.

A senior U.S. defence official said in early March that Russia’s advance on Kyiv, including the convoy, appeared to be stalling because of logistical problems including shortage of food and fuel, as well as low morale among some units.

Attacks by small units of Ukrainian troops on advancing tank columns, in some cases using shoulder-held anti-tank weapons such as the U.S.-made Javelin system, were also a factor in bogging down Russia’s military machine.

To the east, in Brovary, a convoy of Russian tanks was repelled after several were destroyed in an ambush captured in dramatic drone footage released by pro-Ukrainian forces.

To the north in Bucha, near Irpin, the town’s mayor filmed scenes of burnt out tanks and armoured vehicles still smouldering after coming under fierce attack.

In Irpin, Ukrainian forces destroyed a large bridge linking northwestern towns to Kyiv as a way of stalling the enemy’s progress. On Monday, Irpin’s mayor said Ukraine was back in full control. Reuters could not immediately verify his claim.

The result of the flexible defensive strategy and Russian shortcomings has been no major advances on Kyiv for several days.

In the city, where only half the peacetime population of 3.4 million remains, there have been signs of normal life returning to the streets, with some shops, restaurants and cinemas opening and people enjoying the spring sunshine in parks.

Hopes that the immediate threat to the capital may be receding were fuelled last week by the head of the Russian General Staff’s Main Operational Directorate.

He said that the first phase of the operation in Ukraine had largely been completed and that Russian forces would henceforth concentrate on the Donbass region in the east.

That appeared to chime with Western intelligence assessments that Russian forces had abandoned, at least for the moment, their active attempt to take Kyiv following heavy losses and unexpectedly stubborn Ukrainian defences.

On many roads leading out of Kyiv, wrecked houses and debris show the price paid by those who decided to stay. Gas and electricity is often cut and there is no certainty about when and where the next missile might fall.

In Krasylivka village, 92-year-old Hanna Yevdokimova said the invasion was her third conflict after the Soviet-Finnish Winter War of 1939-1940 and World War Two, when she saw German troops march through the village.

Last week, her home was hit by missile wreckage. A twisted fragment of a Russian Kalibr missile lay 100 metres (328 ft) away in a neighbour’s garden.

“What can I do? All I want is to rebuild so that I can die in my own home,” she said.

Some residents of Lukyanivka said they spent nearly a month under Russian occupation as virtual prisoners in their own homes, their mobile phones confiscated and movement only permitted under armed escort.

Now they can come and go as they please amid badly damaged houses.

Near Makariv west of Kyiv, which is still contested, heavy shelling could be heard last week. Even so, the town’s mayor Vadym Tokar travelled through surrounding villages wearing military fatigues and handing out pensions to the elderly.

Farmer Vasyl Chaylo, from Peremoha, described what he said were fearful Russian conscripts, short on rations and disciplined by tougher professional fighters.

“They are afraid. According to my observation, some of them perhaps do not want to fight and want to surrender, but they are kept in line by special forces,” he said.

Chaylo added that he had asked tank crews who set up outside his house how long their dry rations would last and been told a week. “They came to us on the eighth day and said that they had nothing to eat.”

Russia’s defence ministry has acknowledged some conscripts have taken part in the conflict, after earlier denials by the Kremlin and military authorities. The ministry did not immediately respond to a request for comment about rations.

Halyna Shybka, a former nurse in a military hospital in Kyiv for 25 years, ignored the entreaties of her grandchildren and remains with her husband Mykola in the house in Kalynivka, near the frontlines of Brovary, where they have lived in since 1974.

“They tried to persuade us in every way they could to leave with them, but I wanted to stay,” she said, pouring cups of tea in her small kitchen, the sound of outgoing Ukrainian artillery fire rumbling in the background.

“This is our land, we’re not going to leave.”