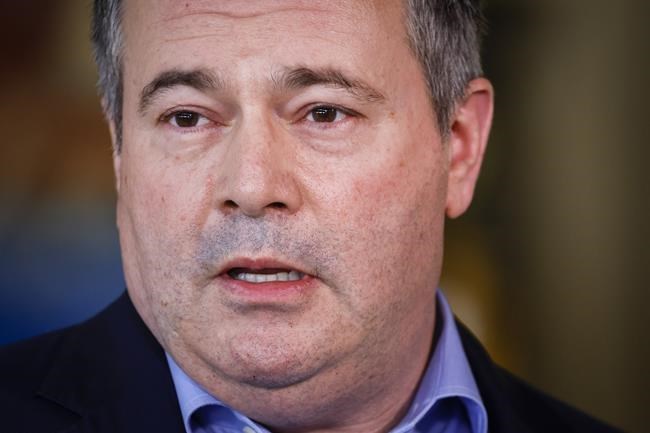 EDMONTON — Alberta Premier Jason Kenney says he has been interviewed by RCMP as part of an investigation into potential criminal identity fraud in the 2017 United Conservative Party leadership contest.

EDMONTON — Alberta Premier Jason Kenney says he has been interviewed by RCMP as part of an investigation into potential criminal identity fraud in the 2017 United Conservative Party leadership contest.

“I did an interview at (their) request, once,” Kenney said Monday after being asked by reporters.

“As I’ve said from the very beginning … we’d always be happy to answer questions. At the end of the day, my campaign did everything it could to carefully follow all of the rules, and I’m confident we did so.”

Police are looking into possible voter identity theft in the campaign and have interviewed multiple Kenney cabinet ministers. No charges have been laid.

It is one of two investigations into the vote, in which Kenney defeated his main rival — former Wildrose Party leader Brian Jean — to take the UCP’s top job and eventually become premier.

Elections officials investigated improper donations to the campaign of another candidate, Jeff Callaway, and levied thousands of dollars in fines.

Well after the race was over, it became known that Callaway’s team had worked behind the scenes with Kenney supporters. Callaway publicly disparaged Jean before quitting the race to support Kenney.

Last week, CBC reported two insiders alleged in court affidavits that Kenney was in the room when the illegal Callaway donations were discussed. The allegations have not been proven in court.

Kenney, asked Monday if he was aware of illegal disbursements, reiterated earlier denials.

“No, absolutely not,” he said.

“To the contrary, while I sought Mr. Callaway’s endorsement … I never offered and he never received from me or anybody in my campaign any kind of fundraising assistance. Period. Full stop.”

He also questioned the legitimacy of the sources making the allegations, saying they themselves have been fined for Callaway fundraising irregularities.

The question of irregularities has resurfaced given changes announced last week to the vote to determine Kenney’s fate as party leader.

The leadership review was supposed to be an in-person ballot April 9 in Red Deer, Alta. The party’s executive cancelled that last week. It said the explosion of interest — 15,000 registered — made an in-person vote undoable. It was switched to a mail-in ballot and opened up to every party member.

Critics, including Jean, say they’re concerned Kenney’s camp orchestrated the change for his benefit. They say they also have concerns Kenney’s workers have illegally added thousands of extra pro-Kenney voters to the rolls.

Jean and the citizen advocacy group Take Back Alberta have spent weeks soliciting people to sign up and vote against Kenney. They say they plan to ask the elections commissioner to investigate.

Kenney’s organizers dismiss the allegations. The UCP executive also rejects allegations from Jean and Take Back Alberta that the party set up an illegal web portal for Kenney’s team to register voters.

“(Jean’s campaign manager) knows that membership portals are routinely created for candidates selling memberships. We created one for him to use for Brian Jean’s nomination,” said UCP spokesman Dave Prisco in a statement.

Jean won a recent byelection under the UCP banner despite a platform to try to unseat Kenney as leader. He has not been sworn in yet and his team isn’t sure he’ll be allowed to sit in Kenney’s caucus.

Jean and other Kenney opponents — who include some constituency presidents and a handful of UCP backbenchers in the legislature — say the premier’s leadership has failed to honour the party’s grassroots ethos and his unpopularity threatens an election loss to the  NDP.

Kenney needs majority support to stay on as leader. He says the vote has degenerated into a proxy war led by “lunatics” who want to destroy the big-tent conservative party.

Also Monday, the Opposition NDP wrote to the RCMP urging it look into the leadership review. The New Democrats say it exhibits disturbing parallels to the 2017 vote.

“I am gravely concerned that the same actors you are currently investigating for possible criminal acts in 2017 are again playing central roles in a similar process, one which will determine whether or not the premier of Alberta retains his office,” said justice critic Irfan Sabir in a letter to the Mounties.

This report by The Canadian Press was first published March 28, 2022.