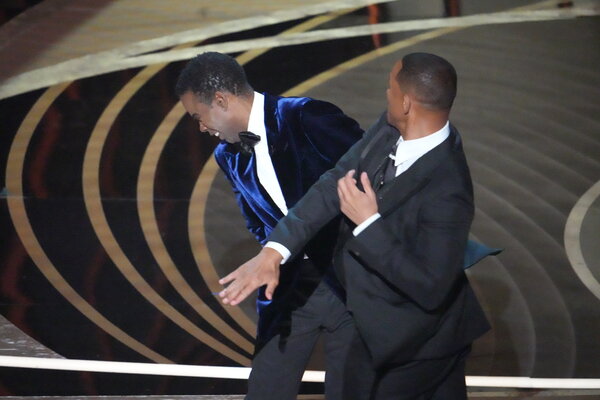 But soon after, the three hosts emerged, with a little help from DJ Khaled, who introduced them.

“This year, the academy hired three women to host because its cheaper than hiring one man,” Schumer said.

Her quip was among the first of several in an opening monologue that toggled between all three women. It was a fast-paced avalanche of witty snipes, rapid-fire roasts and a sprinkle of Hollywood pomp and circumstance as the hosts began their evening-long quest to reverse the Oscars rating slide. Among their early targets were the length of “Power of the Dog,” Florida’s “Don’t Say Gay” bill and the Golden Globes.

It had not been entirely clear before the show began how the three hosts would share time and responsibilities. At a news conference on Thursday, Hall and Sykes said that all three would be onstage together to open the show and that at other points in the program, they would split up.

Sykes also said she did not want to fire off meanspirited jokes, but in an interview with The New York Times later Thursday, added that nothing was off-limits.

The opening minutes of the telecast Sunday offered some early hints at their approach, suggesting that each of the hosts would enjoy solo time in which they play to their professional strengths and personal brands.

Schumer, a self-professed “meanspirited” comedian, returned to the stage by herself after the opening three-person monologue and fired off a scathing one of her own. (Among the people and movies she jabbed at: Aaron Sorkin, Nicole Kidman, and “King Richard.”

Hall later called up male actors up to the stage for so called emergency Covid tests and joked about her need to swab and inspect them.

Here’s what Hall, Schumer and Sykes had to say in the opening monologue.

Regina Hall: We are here at the Oscars.

Amy Schumer: This year, the academy hired three women to host because it’s cheaper than hiring one man.

Hall: But I’m still excited to be hosting, representing Black women who are standing proud.

Sykes: Yes, and living out loud.

Schumer: Yes, yes. And I am representing unbearable white women who call the cops when you get a little too loud.

Hall: You know, we’ve been dealing with Covid for two years. It’s been really hard on people.

Schumer: As many of you know, a decision was made to present some behind-the-scenes awards in the first hour.

Sykes: It was a controversial and difficult decision, but you know, I think we’ve moved on. [Lights flicker.]

Schumer: It’s not our decision.

Sykes: You know, there was a lot of snubs this year. Rachel Zegler for “West Side Story.” Jennifer Hudson for “Respect.” And Lady Gaga and Jared Leto for “House of Random Accents.”

Hall: You know, I was very disappointed that “Space Jam” 2 did not get nominated in the special effects category for that hairline they gave LeBron James.

Sykes: Black Twitter is going to love that one.

Hall: I think so.

Schumer: Yeah, what is that?

Hall: You know, this year we saw a frightening display of how toxic masculinity turns into cruelty towards women and children.

Hall: I know. I know. But, you know, I was actually talking about “The Power of the Dog.”

Sykes: Oh, yes. You know, I watched that movie three times, and I’m halfway through it.

Schumer: You’re at the best part. The best.

Hall: One more week, and you’re in there.

Sykes: Stay with it.

Schumer: Stay with it.

Hall: You know, Samuel L. Jackson is here. Yes, there he is. He just got the Governor’s Award for his lifetime body of work.

Sykes: I mean, I love him. You know, he’s my guy. But I’ll be honest, there’s a few holes in his résumé. No, for real. Like where’s the Sam Jackson rom-com? Like where’s Sam Jackson and Jennifer Lewis in “When This Mo-fo Met That Mo-fo,” you know, or the sequel “Bitch, I said I love you.”

Schumer: He likes that. He likes it. [Looking at Jackson.]

Schumer: Regina, I mean, it’s not the time for that. And providing the soundtrack for the next hour, give it up for the incomparable D-Nice.

Together: Welcome, everybody, to the Oscars!