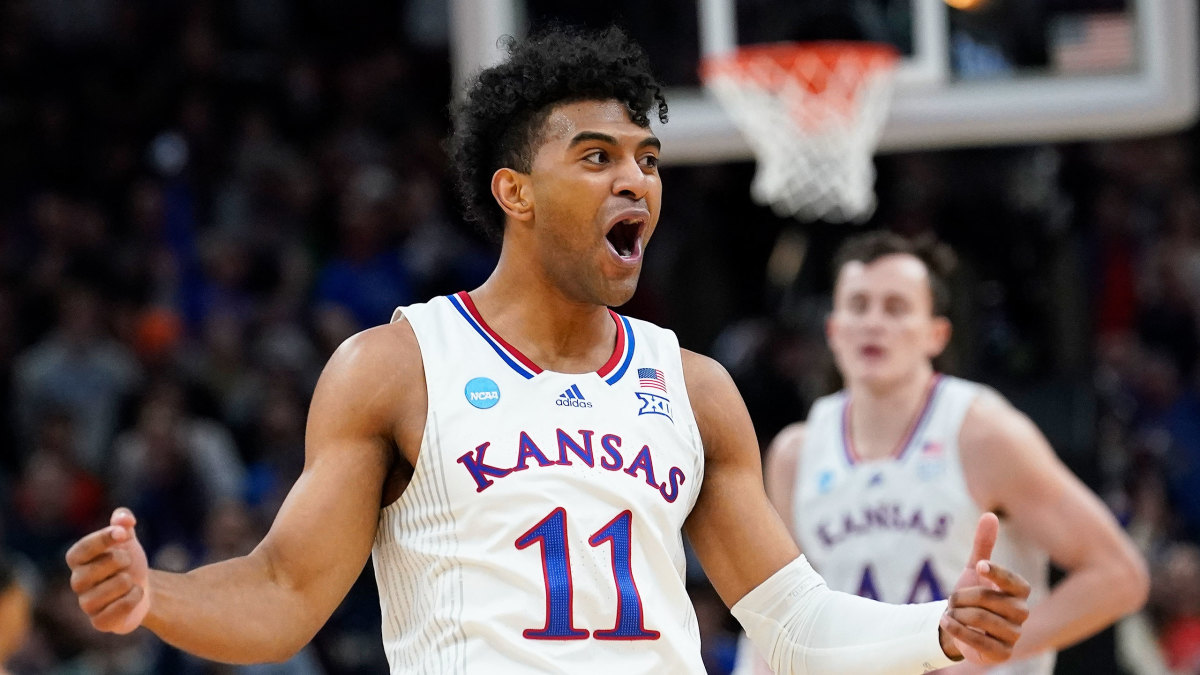 CHICAGO — The lifespan of a top seed tends to follow the same basic pathway: everyone’s a heavy favorite until somebody goes down. When that first domino falls, suddenly, nobody’s safe. And in a single elimination tournament like this, each shaky moment from one top dog reinforces that someone else might be next. All of a sudden, everyone’s vulnerable, and Baylor, Gonzaga and Arizona all hit that wall this March.

The Kansas Jayhawks, the last No. 1 standing, went into Sunday’s halftime searching, trailing No. 10 seed Miami by six in the Elite Eight. You couldn’t help but wonder. “I’ve thought all along that [the Final Four] was a possibility,” Kansas coach Bill Self said. “But I’ve also thought all along that the margin for error wasn’t such where we could get [too] loose and have it be a probability.”

As it turned out, Self’s past…self (or however you want to frame it) was right on both counts. Seeding be damned, the Jayhawks wound up on that precipice, in a manner they hadn’t experienced in this tourney and against an opponent few would have placed chips on to begin with. Now, they are also headed to the Final Four, as deserving champions of a region that finally handed them a proper test, which they passed: Kansas wound up winning by 26 points, 76–50, a scoreline that doesn’t explain the first 20 minutes, but ultimately told the story.

There was no grand message from their coach at halftime (“I’m not good at those type of things,” he insisted), but the Jayhawks needed to play better. They had not been a stellar halfcourt team against Providence on Friday, and they hadn’t here. To manifest better shots, first they had to get stops. Shifting the tempo and attitude of a game requires a team effort. And as Kansas returned with patience, Miami sputtered just enough for things to flip. After four second-half minutes, the Hurricanes had turned it over four times—minor but compounding errors—and the Jayhawks had tied it at 40. A confident three-pointer from Christian Braun, his team’s first of the game, sent the second half into its first media timeout. “And then the lid came off,” Self said.

“We looked up at the scoreboard, and we had fallen behind already,” Miami coach Jim Larrañaga later admitted. “And I think that created some anxiety. And what ends up happening then is instead of settling down and executing better, we started to rush it even more.” The Hurricanes’ offense, which had operated coolly for much of the past few weeks, turned rudderless, its veteran guards unable to wrest back a comfortable pace. They never took the lead back.

The whole thing happened fast, and nobody on either side had a perfect explanation for exactly how. “I think we needed some energy more than anything,” Braun said. Kansas turned into the team that earned that seed, unfettered by the moment, flinging passes with abandon and using its size to dictate the margins of play. Braun got aggressive. David McCormack finished his opportunities. And star guard Ochai Agbaji played his best stretch of the tourney across 17 second-half minutes, delivering 12 of his 18 points, including a death blow from the left corner punctuated by an outward fling of his arms, signaling that this thing was, in fact, over.

Kansas has now earned a date with Villanova, the opponent that ousted it on the way to the 2018 championship, the last time either side made the Final Four. Of course, everyone is going to talk about the other game: Duke and North Carolina are playing each other for the first time in tournament history, with Coach K’s retirement pending. But even for a top seed, it’s not like Kansas has been at the forefront of the tourney discussion to begin with: everyone else bowed out, and the Jayhawks kept it moving, aided by upsets on the opposite side of their region, with quality teams but no top-rated opponents standing in their path.

With four of college basketball’s storied programs emerging from the mayhem mostly unscathed and headed to New Orleans, that’s no longer the case. Kansas has taken a backseat to high-profile departures elsewhere and other goings-on (see: Saint Peter’s), and will almost surely not be the top story this week, either. Still, spurred on by past frustrations—Kansas was certifiably wrecked by USC on its way out last year, and perhaps more painfully, was a contender when COVID-19 led to the cancellation of the 2020 postseason—there’s no shortage of motivation. Most of the Jayhawks’ core players have experienced all of that. “This year feels like we’re avenging that year,” McCormack says.

The seeds hardly matter anymore, but after all the talk about basically anybody else (other than the fact that Kansas has perpetually had the cleanest route of the top seeds), it may now be the favorite to actually, you know, win this thing. Villanova is always formidable, but will be without injured star Justin Moore. Whoever survives the Duke–Carolina Final Four game nobody expected will have to avoid any 48-hour emotional letdown. It’s all played out about as well as the Jayhawks could hope for, a gutsy second half serving proof of concept that adversity isn’t the end. As Self explained it: “Two good plays turned into four, turned into eight, turned into 16. That was about as well as we could play.”