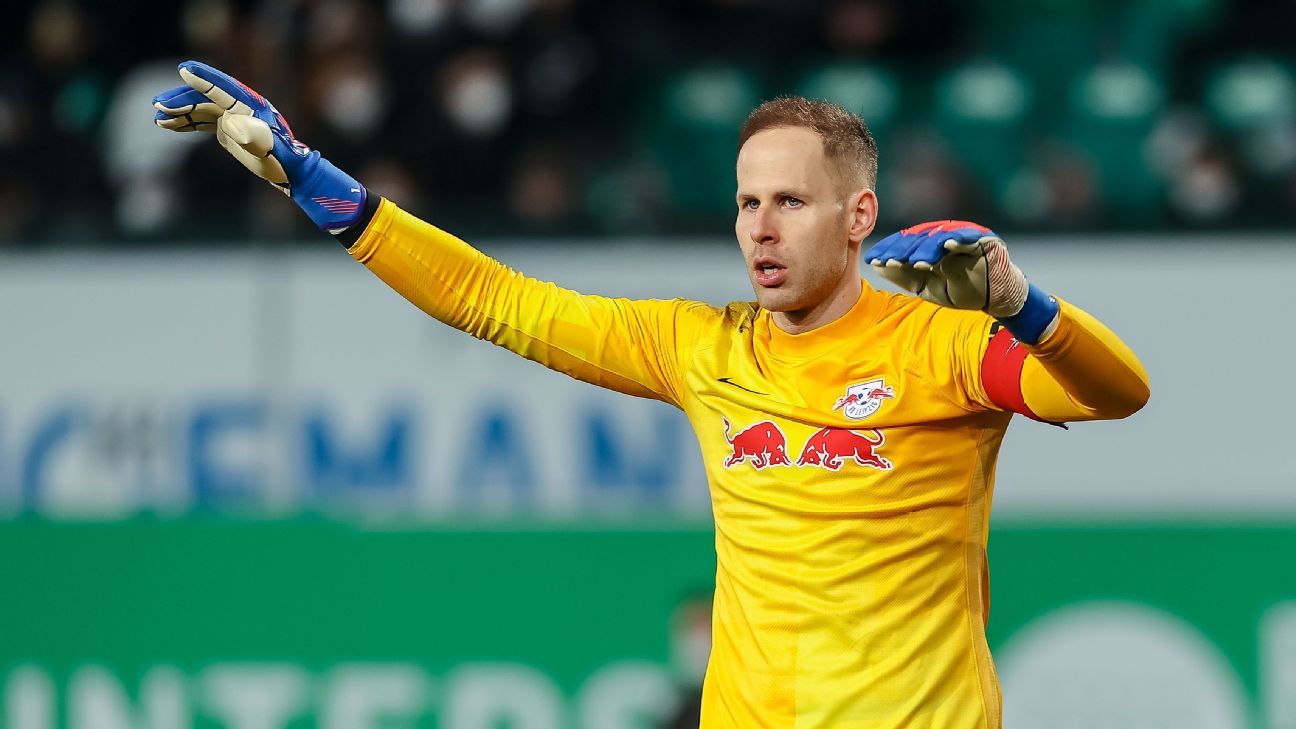 Another clue? He’s played in a Champions League semifinal and at the European Championships. He’s also 31 years old, and captains his club side.

Meet Peter Gulacsi, the Hungary and RB Leipzig No. 1. If he decides to go into coaching post-career, he’s arguably set for mentors, but he’s only partly a product of these coaches. Instead, when he’s asked what’s the greatest piece of advice he has ever received, he turns to his old goalkeeping coach from his time at Liverpool.

Gulacsi was on their books from 2008 to 2013 and never played a first-team game, but those were formative years for the RB Leipzig mainstay. He remembers one conversation he had with then-goalkeeping coach Xavi Valero (now at Napoli). “I wanted to train a lot and I wanted to be on the pitch every day and he said, ‘Sometimes less is more but do it with quality,'” Gulacsi tells ESPN. “And this is stuck with me.”

Having spent time in the wind and rain in the lower leagues of English football, he’s now a bona fide Champions League-standard stopper. Gulacsi’s tale has been one of endurance and trust in his own ability, but most importantly: it’s all about timing.

Training had been moved forward 30 minutes. Gulacsi didn’t want to be late, so as we talked at the team’s state-of-the-art training base just outside Leipzig city centre, it was a whistle-stop tour of a career that spans 15 years.

His career started in MTK Budapest before he moved to Liverpool in 2007, where Gulacsi spent his six years living a nomadic existence. He’d spend preseason learning from Pepe Reina, playing for the reserves and then going out on loan to Hereford United, Tranmere Rovers and Hull City. “They were not easy times — there wasn’t a moment where it was clear I could reach the level needed to get to the top,” Gulacsi says. “But I had this dream in my head, and I’m really happy that my career went this way.”

He’s had to pick his moments carefully to make it here. Gulacsi feels he managed to reach and maintain his position at the top due to a “little bit of luck” and making “good decisions throughout my career in terms of changing clubs at the right moments.” He also says he was “relatively patient” as he stayed at Liverpool until he was 23 and had the benefit of working with “great players and great coaches.”

When Gulacsi was signed by Liverpool, it was originally on a year-long loan, except the English club moved to make it a permanent deal. He was one of three players to make the move from MTK Budapest at this time, alongside striker Krisztian Nemeth and forward András Simon, and he’s been by far the most successful of the trio. Nemeth’s career took him to the Eredivisie and MLS, though he’s now a free agent after a short spell with Hungary’s Debrecen. Simon is at Hungarian first-division side Gyirmot.

“I didn’t want to rush it and when I felt OK, the moment is there to go my own way to be the No. 1 somewhere — maybe not on the highest level but to be an important part of a team, you know?” Gulacsi says. “That was there was when I went to Salzburg.”

He signed for RB Salzburg as a free agent in 2013, and after he impressed there under Hasenhüttl and Hütter, Rangnick approached him for Leipzig in 2015, paying £2.7m for his services. Gulacsi started behind Swiss keeper Fabio Coltorti, but soon edged ahead and, by the following season, Gulacsi was first-choice for Leipzig and Hungary, a position he has since maintained.

When he signed for Leipzig they were in the 2 Bundesliga, but a core group of those players saw the club promoted to the top flight in 2016, where Leipzig has become a perennial fixture in the Champions League. Gulacsi is regarded as much of a club legend as forwards Emil Forsberg and Yussuf Poulsen, or defenders Willi Orban and Lukas Klostermann.

Amid the changing landscape of football and within his own club, Gulacsi has stayed true to his self-stated values of self-improvement and trusting in his own ability. He’s an old-school goalkeeper in the mould of Petr Cech or Edwin van der Sar, but has worked on his ball-playing skills as he adjusts to the ever-changing nature of what it means to be a goalkeeper in the modern game.

“You have to be really good with the ball on your feet,” Gulacsi says. “That’s one thing of course — playing behind the high defensive line is also important.

It’s been a turbulent season at Leipzig. Having seen Nagelsmann leave for Bayern Munich last summer, the team suffered further upheaval when Dayot Upamecano, Ibrahima Konate and midfield linchpin Marcel Sabitzer all departed as well. The club invested in youth to replace the outgoing figures, giving Gulacsi a new-look centre-back partnership in front of him this term with Josep Gvardiol and club legend Willi Orban often the chosen pair.

“This year was the first time when we had a little bit bigger change in our defensive line,” Gulacsi says. “I think the new guys adapted quickly to the Bundesliga, to our style of playing, and as a goalkeeper I have tried to support them, tried to help them in every way. I think we have great communication at the back.”

The season started under now-Leeds manager Jesse Marsch, but he left after six months in charge amid a club caught between two philosophies: the team were accustomed to Nagelsmann’s possession-based style, while Marsch wanted to return to Red Bull’s ethos of pressing and high-tempo football. The club won seven out of 20 games under Marsch and on Dec. 5, 2021, he departed. The club were in 11th place at the time, and Domenico Tedesco was drafted to steer the team back on track. After eight wins in 13 league games, they’re now in fourth.

“Football for me is always a complex thing, you know,” Gulacsi says. “At the end of the day, if a team is not successful, you’re always going to be judged on results. We had some great games, but we just couldn’t be consistent enough.

“Jesse’s a fantastic manager. I think he will do really well at Leeds and I wish him only the very, very best. Yeah, we’ve gone another way now, we have found our track, and so is football — you have to accept that and live with it. I think we stabilised ourselves since the winter break, how many goals we conceded, how stable we play. I think step by step we got where we wanted and of course we want to keep improving.”

Gulacsi’s leadership has been tested through the turbulence, but he has seen great players and coaches come and go at Leipzig. He cites Timo Werner and Naby Keita as some of the best he’s played alongside, while he says Dayot Upamecano will be “one of the best centre backs in the world,” but he is also quick to talk up the team’s current midfield stars Christopher Nkunku and Dani Olmo.

While Leipzig are too far off league leaders Bayern Munich to challenge them this season, they are focused on a successful cup run in the DFB Pokal, with Union Berlin next up in the semifinals, and on securing a top-four finish in the league. That Bundesliga journey continues on April 2 when they take on Borussia Dortmund (stream LIVE, 12:30 p.m. ET, ESPN+).

“In football, I always say you will get your chance, but you don’t get many chances,” Gulacsi says. “You have to be ready, you have to perform. And I was always ready for this kind of opportunity.”