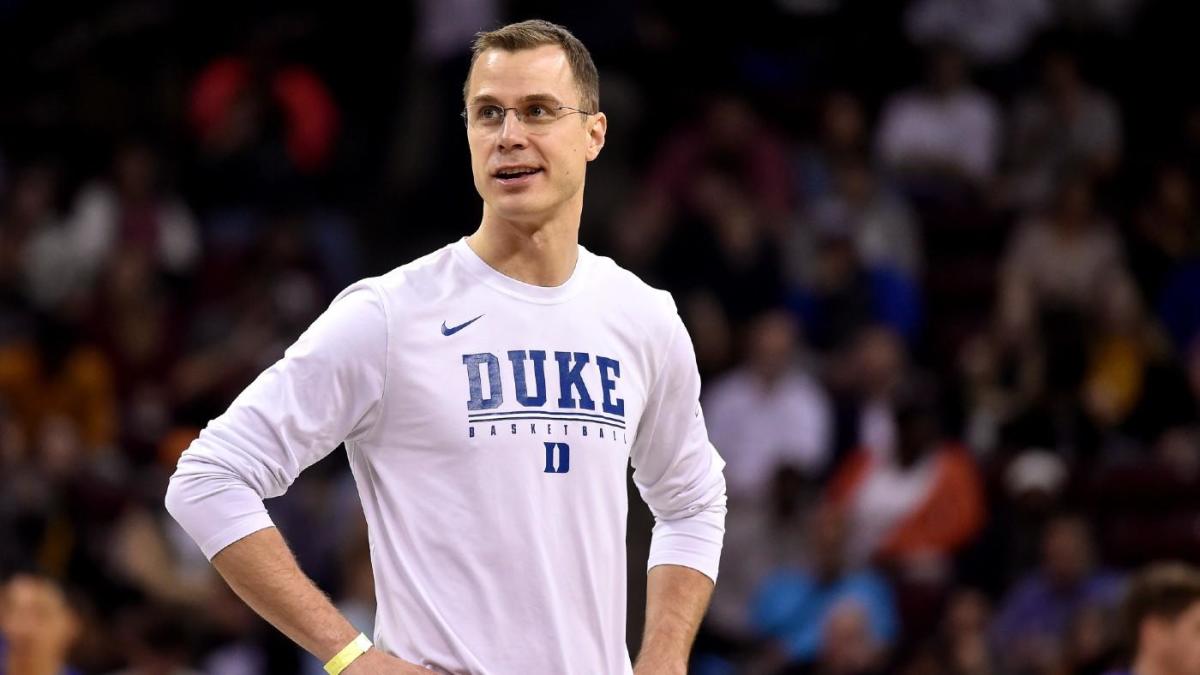 The Duke basketball program is preparing to enter a new phase of its storied history with the looming retirement of legendary coach Mike Krzyzewski, but there will be a familiar face leading the Blue Devils next season. Former Duke great and current associate head coach Jon Scheyer is set to take over the program for the 2022-23 season following Coach K’s retirement.

Scheyer, 34, will be the ACC’s youngest head coach by roughly a decade and one of the youngest Division I head coaches in the sport. But Krzyzewski was just 33 when he took over at Duke in 1980, and things worked out pretty well.

“Simply put, Jon Scheyer is Duke,” Duke athletic director Nina King said in June. “As you know, he came to Duke in 2006 and enjoyed an outstanding career as a student-athlete. His blood, sweat and tears are in these hardwoods. As a player and now an associate head coach, Jon has been learning from and been mentored by the very best in Coach Mike Krzyzewski. He is a teacher and mentor in his own right – passionate about the student-athlete experience, both on and off the floor. Jon knows what it takes to achieve excellence – he’s a national champion.”

The rationale for Duke’s clearly defined succession plan and Scheyer’s year spent as an unofficial “coach in waiting” was partly for the sake of transparency in recruiting. Instead of getting blindsided by a coaching change, Class of 2022 prospects have had nearly a year to consider what Duke will be in the future with Scheyer at the helm. It seems to be resonating. Duke’s 2022 recruiting class is ranked No. 1 in the country in the 247Sports Team rankings and features three of the top-five prospect.

Here is a look at how Scheyer rose to become the replacement for one of college basketball’s greatest coaches of all time.

Ranked as a four-star prospect in the Class of 2006 by the 247Sports Composite, Scheyer signed with Duke out of Glenbrook North High School near Chicago and quickly took on a key role by starting and averaging 12.2 points per game as a freshman. He ultimately appeared in 144 games during his college career, which culminated with Duke’s national title run in 2010.

Scheyer was the leading scorer as a senior for that team, which finished 35-5 and secured Krzyzewski’s fourth title with a 61-59 win over Butler in the national championship game. He finished his career with 2,077 career points, which ranks 10th on the program’s all-time scoring list.

As a 6-foot-5 guard, Scheyer was known for his 3-point shooting and still ranks fourth all-time in program history for both 3-point attempts and makes, but he also flashed his distributing skills as a senior by handing out 4.9 assists per game.

The path back to Duke

After going undrafted in 2010, Scheyer suffered a serious injury to his right eye while playing with the Miami Heat in an NBA Summer League game. The incident left him legally blind but did not derail his playing ambitions. Scheyer played in the G League and overseas from 2011-13 until joining the Duke staff as a special assistant for the 2013-14 season. He assisted in developing game plans, breaking down film and in planning practices, according to program archives.

“I am extremely fortunate to be able to come back to Duke,” Scheyer said at the time. “It is a tremendous honor to be on Coach K’s staff and it is something I will cherish. I want to continue to learn from the entire staff and bring whatever I can to help the program.”

“We are ecstatic about Jon joining the staff,” Krzyzewski said at the time. “He was one of the great players to play at Duke: a national champion and a captain not that far removed so he adds a youthful exuberance to our staff. His knowledge of the game is incredible. I think he will be a terrific teach and an outstanding recruiter.”

When Capel left to take the head coaching job at Pittsburgh after the 2017-18 season, Scheyer and Nate James were promoted to associate head coaches, continuing Krzyzewski’s preference of relying on his former players in key staff roles.

“Nate and Jon are former captains who clearly understand Duke and our culture,” Krzyzewski said at the time. “They’re both national champions who’ve played an integral role in our success over the past two decades. As good as they were as players, and they were both excellent, they have been remarkable, distinguished and instinctive coaches who have earned this opportunity. With Nate and Jon assuming additional responsibilities in their associate head coach roles, I am excited about the makeup of our staff moving forward.”

James was named the coach at Austin Peay last April, clearing the runway for Scheyer as the natural successor to Krzyzewski if the program opted to hire from within upon Krzyzewski’s retirement.

If not at Duke, it was clear that Scheyer was destined to become a head coach elsewhere at some point, if he wanted. Though just now approaching his mid-30s, Scheyer was rumored to be among Pittsburgh’s candidates in 2018 when Capel ultimately got the job. His name also came up in the rumor mill during this year’s coaching carousel in connection with the DePaul job.

Considering Scheyer’s growing reputation as a top recruiter, it’s no surprise that he’s drawn interest from other programs. Among the prospects he’s helped bring to Duke as a primary recruiter are Jayson Tatum, Cam Reddish, Vernon Carey and 2021 five-star forward Paolo Banchero, according to 247Sports. He was also the secondary recruiter for Zion Williamson.