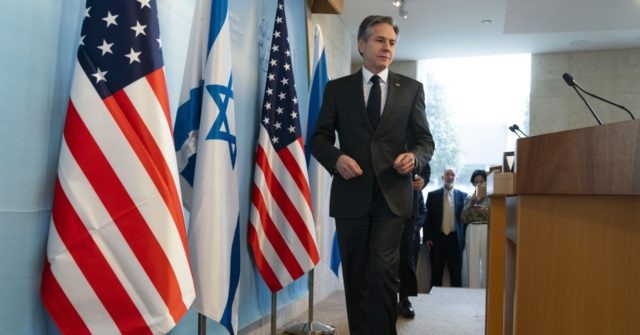 U.S. Secretary of State Antony Blinken has tried to reassure a wary Israel and its Gulf Arab allies ahead of a possible renewal of global powers’ international nuclear deal with Iran

JERUSALEM (AP) — U.S. Secretary of State Antony Blinken on Sunday sought to reassure a wary Israel and its Gulf Arab allies that the Biden administration is committed to their security ahead of the possible renewal of global powers’ international nuclear deal with Iran.

Blinken made the comments shortly before joining his counterparts from Israel and four Arab countries at a special gathering where the Iranian nuclear deal was expected to top the agenda. Israel and many of its neighbors are fiercely opposed to the deal, which they believe with embolden and enrich Iran.

“When it comes to the most important element, we see eye-to-eye,” Blinken told reporters at a news conference with Israel’s foreign minister. “We are both committed, both determined that Iran will never acquire a nuclear weapon.”

The Biden administration has been working to renew the 2015 nuclear deal, which placed curbs on Iran’s nuclear program in exchange for billions of dollars in sanctions relief. With support from Israel, the Trump administration withdrew from the deal in 2018, causing it to unravel.

Although Iran has since raced ahead with its nuclear program, Israel and Gulf Arab countries are deeply concerned about restoring the original deal. Israel fears it does not include enough safeguards to prevent Iran from developing nuclear weapons. Both Israel and its Gulf allies also believe that relief from economic sanctions will allow Iran to step up its military activities across the region, including support for hostile militant groups.

Blinken said the U.S. believes that restoring the nuclear deal “is the best way to put Iran’s program back in the box it was in.” He added: “Our commitment to the core principle of Iran never acquiring a nuclear weapon is unwavering.”

He also vowed to cooperate with Israel to counter Iran’s “aggressive behavior” across the region.

It remains unclear if or when the nuclear deal will be renewed, but there are indications it could be soon despite several last-minute snags, one of which involves Iran’s demand for the U.S. to lift its designation of the Islamic Revolutionary Guards Corps as a “foreign terrorist organization.”

Israel is deeply opposed to such a step and Israeli Prime Minister Naftali Bennett told Blinken that he hoped “the United States will hear the concerned voices from the region — Israel’s and others — on this very important issue.”

Israel and its neighbors believe any easing of sanctions and the delisting to the IRGC would embolden Iranian-backed militant groups from Hezbollah in Lebanon to the Houthis in Yemen, who have recent launched several rocket attacks on the United Arab Emirates and Saudi Arabia, and Hamas in the Gaza Strip.

Meanwhile, a senior European official was in Tehran on Sunday to try to unsnag the talks a day after Iran’s top diplomat publicly signaled flexibility over the IRGC designation.

If a deal is reached, Israel has repeatedly noted that it is not a party to the agreement and reserves the right to take action, including a potential military strike, against Iran.

“Israel and the United States will continue to work together to prevent a nuclear Iran. At the same time, Israel will do anything we believe is needed to stop the Iranian nuclear program. Anything,” Israeli Foreign Minister Yair Lapid said. “The Iranians want to destroy Israel. They will not succeed, we will not let them.”

Underscoring regional anxieties, Israel’s government hastily arranged a meeting of top diplomats from Arab countries that have normalized relations with Israel. The two-day gathering, with Blinkent, is set to begin later Sunday at a kibbutz in the Negev Desert.

In addition to Blinken and Lapid, their counterparts from Bahrain, Morocco, the United Arab Emirates and Egypt will attend. All four countries are considered moderate Sunni Muslim nations.

The U.S. preoccupation with Russia’s invasion of Ukraine and bolstering NATO’s presence in Eastern Europe has fueled concerns throughout the Middle East that America’s attention may be stretched thin.

It remained unclear whether any decisions would emerge from the diplomatic gathering. But for Israel, hosting such a gathering itself is a significant accomplishment. Egypt is the first Arab country to make peace with Israel, while the other three nations normalized relations with Israel in 2020 in the so-called Abraham Accords brokered by the Trump administration.

Yoel Guzansky, a senior researcher at the Institute for National Security Studies, a Tel Aviv think tank, said the meeting was historic by bringing together four Arab four ministers to Israel for a public, high-level gathering for the first time. “This is quite remarkable,” he said.

He said discussions would likely focus on the aftermath of a nuclear deal, with each country looking for different things, whether it be security guarantees, weapons systems, intelligence or diplomatic support. “Each country has its own wish list, but the common denominator is Iran,” he said.

While Iran may be the issue of most immediate concern to Israel and its neighbors, the war in Ukraine looms large.

That conflict has roiled world energy markets, leading the U.S. and Europe to appeal to Arab and other major oil suppliers to step up production. The war may also soon result in major food security challenges, particularly across the Middle East, which imports vast quantities of wheat from Ukraine.

Bennett has presented himself as a mediator between Putin, Ukraine and the West but his discussions with the Russian leader have yet to bear fruit.

Israel has walked a fine line between Russia and Ukraine. Bennett has expressed support for the Ukrainian people but stopped short of condemning Russia’s invasion. Lapid has been much more outspoken in his criticism of Russia, giving Bennett some space to continue his mediation efforts.

Blinken was also traveling to Ramallah in the occupied West Bank to meet with Palestinian leader Mahmoud Abbas and stress to him the U.S. commitment to help the Palestinian people and encourage a resumption in long-stalled peace talks with Israel.

Ahead of his meetings with the Palestinians, Blinken called on both sides to avoid taking actions that could raise tensions ahead of the sensitive holiday period around Passover, Easter and Ramadan. “It’s a message that I’ll be underscoring in all of my meetings on this trip,” he said.

Last year, violence between Israeli police and Palestinian protesters in Jerusalem spilled over into an 11-day war between Israel and Hamas.

Bennett announced that Israel was raising the number of Gazans allowed to work in Israel to 20,000 people as part of a broader effort to ease tensions.

“While we can’t solve everything, we can improve the lives of people on the ground,” he said.