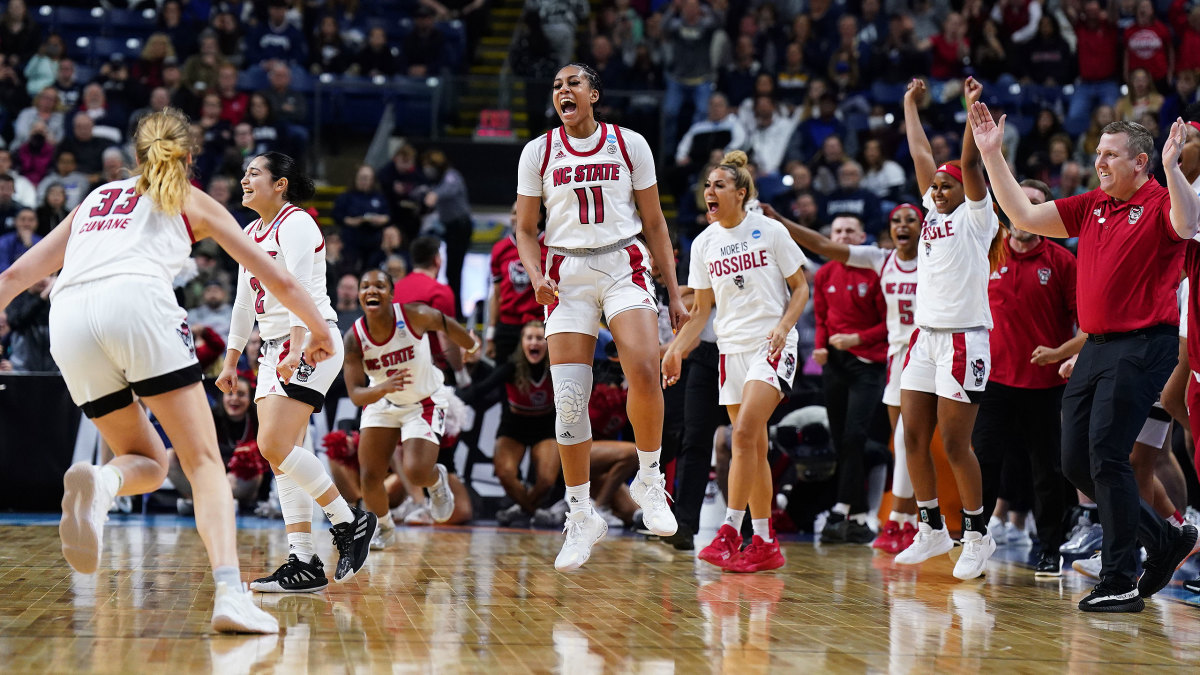 BRIDGEPORT, Conn. — With just over a second to play in Saturday’s Sweet 16 matchup vs. Notre Dame, NC State coach Wes Moore turned to his bench and shot two fists up to the sky. Moments earlier, on the other end of the floor, graduate guard Raina Perez hauled in a three-point attempt taken by Irish sophomore forward Maddy Westbeld. And as Moore looked back at his team, with the Wolfpack leading 64–63, he let out a cheer that was a full game—and nine years—in the making.

For much of Saturday’s contest, the looks on the faces of the longtime NC State coach, and those on his bench, were all too familiar. Moore often paced the sideline with his arms crossed over his red quarter-zip sweater, his face stoic. Players seldom had reason to cheer. The Wolfpack trailed from the 7:34 mark of the second quarter until 14.8 seconds to play in regulation, when Perez, noticing that Irish senior guard Dara Mabrey had the “basketball stuck on her hip,” came up with a steal and transition layup that flipped the Sweet 16 clash, and perhaps the legacy of the NC State senior class, on its head. After losing in this stage for each of the past three seasons, the Wolfpack are finally into the Elite Eight, their 66–63 victory marking a long-awaited triumph.

“They came back for this reason,” Moore said. “They wanted to rewrite this chapter from a year ago.”

This season was supposed to be different for the Wolfpack. Despite being a No. 1 seed for the second consecutive campaign, Moore emphasized a one-step approach, a philosophy adjustment in this year’s tournament after perhaps looking too far past their opponents last March. Senior center Elissa Cunane cited an identity shift as well, saying the ACC regular season and conference tournament champions went from being an offensively-minded group to a defensively-minded one. And yet, Cunane said after NC State’s win Saturday, the Wolfpack’s first-half struggles vs. Notre Dame were eerily similar to those that ended their season in 2021. The result was almost identical as well.

While Cunane, an AP second-team All-American, led the Wolfpack with 16 points and 10 rebounds, it was Perez who made the plays that extended NC State’s season. Her transition layup and the two free throws that iced the win away comprised four of her seven points. Moore said of his 5’4’’ guard, “Beyonce’s big, but Raina blows her away.” Adding later, “That show, Everybody Loves Raymond, it’s now Everybody Loves Raina.”

Perez began her college career at Northern Arizona, and transferred to Cal State–Fullerton before finally joining the Wolfpack last season. Lindsay Edmonds, an assistant coach at NC State for eight seasons and the current head coach at Rice, recalls upon seeing clips of Perez for the first-time calling Moore immediately, to say, “We gotta get on the phone with this kid. She can flat-out score it.”

“She had never heard about NC State,” Edmonds says. All Moore could initially do was leave a voicemail.

It was at her brother’s urging that she called the Wolfpack coach back. And NC State is surely glad she did.

The Wolfpack are one of the most veteran team’s in women’s college basketball, with four of their starters being either seniors or graduate students. But playing a team they had lost to on Feb. 1, it was Notre Dame freshman guard Olivia Miles who spent most of the rematch looking like the most experienced player on the floor. Miles scored 15 first-half points to help the Fighting Irish head into the locker room up, 38­–30. But she added only six in the second half and committed two of Notre Dame’s seven turnovers in the fourth quarter, mistakes that allowed NC State to claw back.

“I’m starting two freshmen and a sophomore,” coach Niele Ivey said. “And we have pretty much everyone back. The future is really bright, and I’m really excited, excited just to see who we are and what we’re going to do in the future.”

But in the present, the Wolfpack will continue on. Moore has been with NC State since 2013, winning more than 220 games in that span. But never, before Saturday, had he advanced out of the Sweet 16. “It feels pretty good to me, too,” he said.

Moore said it would have been hard for him to “face the fact” that his senior class would have gone without an Elite Eight berth had they lost on Saturday. Instead, UConn awaits, with them no longer having to ponder that hypothetical.

“I think this group all came back to do something special,” Edmonds says. “They didn’t come back to finish at the same level where they’ve been.”

As they walked off the court at Total Mortgage Arena, with at least one other game on their schedule, they had accomplished just that.