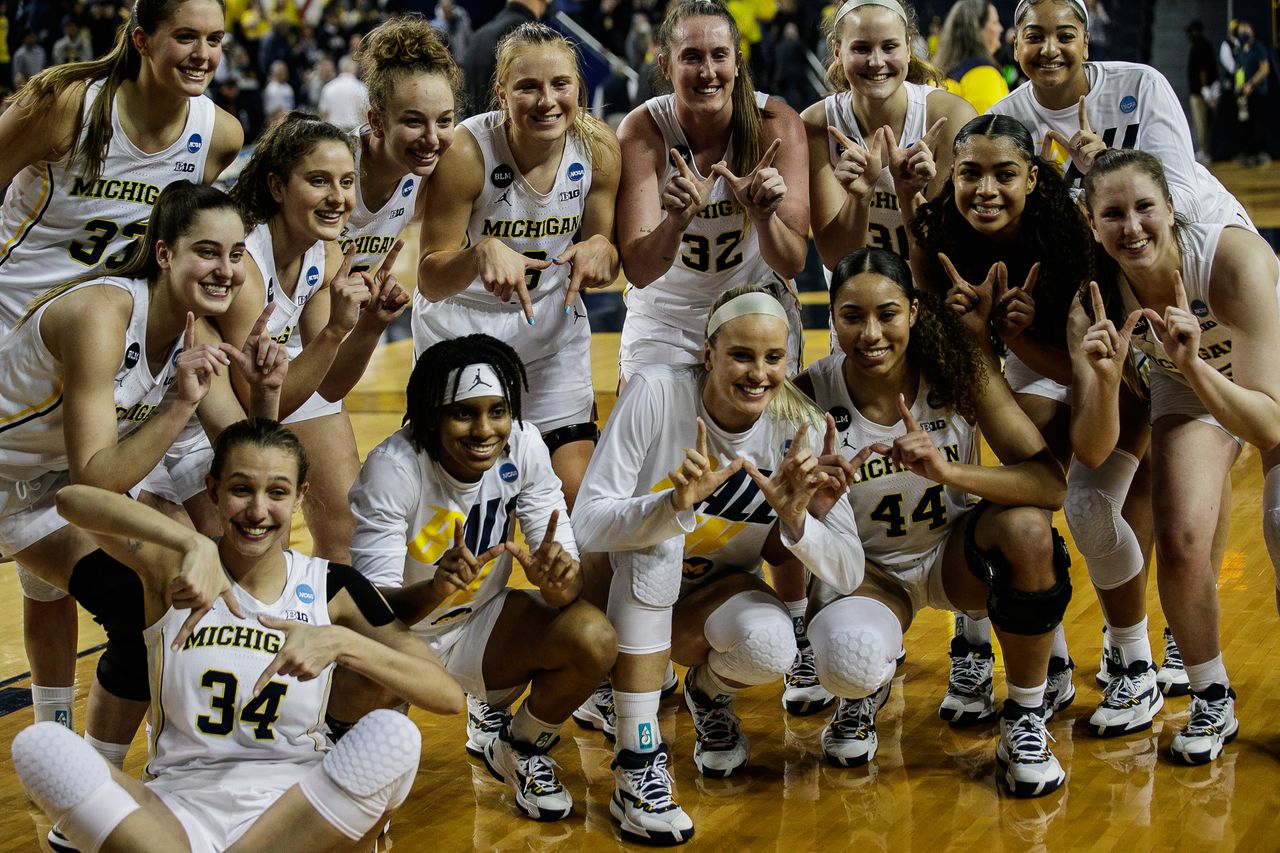 WICHITA, Kan. – Michigan’s women’s basketball team will face its third straight double-digit seed in the NCAA Tournament when it tips off against South Dakota at 6:30 p.m. Saturday at INTRUST Bank Arena in Wichita, Kansas.

But Wolverines head coach Kim Barnes Arico isn’t overlooking the 10th-seeded Coyotes, who knocked off No. 7 seed Ole Miss and No. 2 seed Baylor to reach their first Sweet 16.

Meanwhile, No. 3 seed Michigan (24-6) lost four of its previous six entering the tournament but bounced back in the opening two rounds. It routed No. 14 seed American 74-39 in the first round before using a second-half surge to down No. 11 seed Villanova 64-49 in round two.

Here are some keys to the Wolverines slowing down the streaking Coyotes and advancing to the Elite Eight for the first time.

Michigan won its first two games handedly, but it wasn’t the result of fast starts in front of a home crowd at Crisler Center. It trailed American 8-4 after the first six minutes and was down 16-13 after the first quarter against Villanova.

Meanwhile, South Dakota has not trailed during the tournament. It opened with an 11-2 run against Ole Miss and jumped on Baylor early, taking a 16-4 lead into the second quarter.

“That’s all I keep hearing about on the TV and the radio is they’ve never trailed,” Barnes Arico said with a smile. “I know they’ve never trailed. They have really done a great job of jumping on both of their opponents in the first and second round because they’ve shot the ball exceptionally well from the start. Really with 3s and their post player (Sjerven) making 3s early and being super aggressive early.

“I’ve been really proud of the way our team has defended in the first two rounds as well. I think it’s going to be a battle on that end. Our team knows the importance of the start. We’ve kind of been the opposite because I think we are — I don’t know what the right word is, but we’ve been so excited in our first two contests that we’ve been going up and down, really not making an easy bucket real quick. Once we’ve settled down, we’ve been able to establish ourselves.”

The senior All-American knows this is her last ride in a Wolverines uniform and has been the team’s best player in the first two rounds. The storyline heading into the Villanova game was how she would match up against Villanova All-American forward Maddy Siegrist, the second-leading scorer in the country.

Not only did Hillmon help limit Siegrist to 12 points on 5-of-13 shooting, but she foiled Villanova’s defensive game plan against her, racking up a game-high 27 points and 11 rebounds.

But the 6-foot-2 Hillmon will draw another tough assignment Saturday against Sjerven, a three-time Summit League Defensive Player of the Year.

“I think that’s just something that really motivates Naz, something that’s going to fuel her fire for sure,” Barnes Arico said. “She has something to prove. That’s kind of the way she has been her whole entire career. She’s an undersized post player.

“Naz has a lot of special things inside of her that you don’t realize. I think Naz will definitely be excited about this opportunity because she’s going to have a tough matchup and she knows it. We’ve been watching film, we’ve been talking about it, what South Dakota has been able to do. It’s obviously one person defending their big, but it’s a whole team effort. They’re really packing the paint, really throwing multiple bodies at you.”

Michigan’s biggest advantage is on the glass. It ranks sixth nationally in rebound margin and has dominated the boards in the first two games of the tournament, out-rebounding American 41-35 and Villanova 49-25.

Sjerven is 6-foot-2, but South Dakota’s other four starters are all under 6 feet. The Wolverines have three starters that stand at least 6 feet: Hillmon, Emily Kiser (6-foot-3) and Laila Phelia (6 foot), and that doesn’t include their second-leading scorer Leigha Brown, a 6-foot-1 guard who has come off the bench since returning from injury in the team’s regular-season finale against Iowa.

“Michigan is a great defensive team and they’re a great offensive team,” Plitzuweit said. “They provide us major challenges on both ends of the court. Very tough, very disciplined, very physical.

“Then on top of that, I think they’re one of the best rebounding teams in the nation. The list just kind of goes on and on and on. For us, we’re going to try — I think we have to go into the game with an approach to be the aggressor. They’re going to go into the game with the same mindset, the same approach. We have to have a couple different options of things that we can try and see if any of them work. If they don’t, better scrap it and go to the next one pretty quickly.”

Turnovers have plagued Michigan at times this season, but it often has been able to overcome them by dominating the boards.

“I think that comes with experience,” Barnes Arico said of South Dakota, which has three fifth-year starters. “I think one of the reasons they do that so well is because they’re experienced at those positions. They have a fifth-year kid handling the ball, a fifth-year kid as the Player of the Year, and the ball is in her hands a lot of the time.

“I think they are outstanding. When Northwestern played them, they turned it over a little bit. I think that was probably Northwestern’s defense that kind of caused that. Those were some things that our team was watching. How can you be disruptive against a team that really doesn’t turn it over that much? But I do think that our defense, our players really take pride in the way that we defend, and we’re really going to try to be disruptive on the defensive end and use our length and our defensive ability to try to be as disruptive as possible.”

In her final game at Crisler, Michigan’s Naz Hillmon delivers another All-American performance