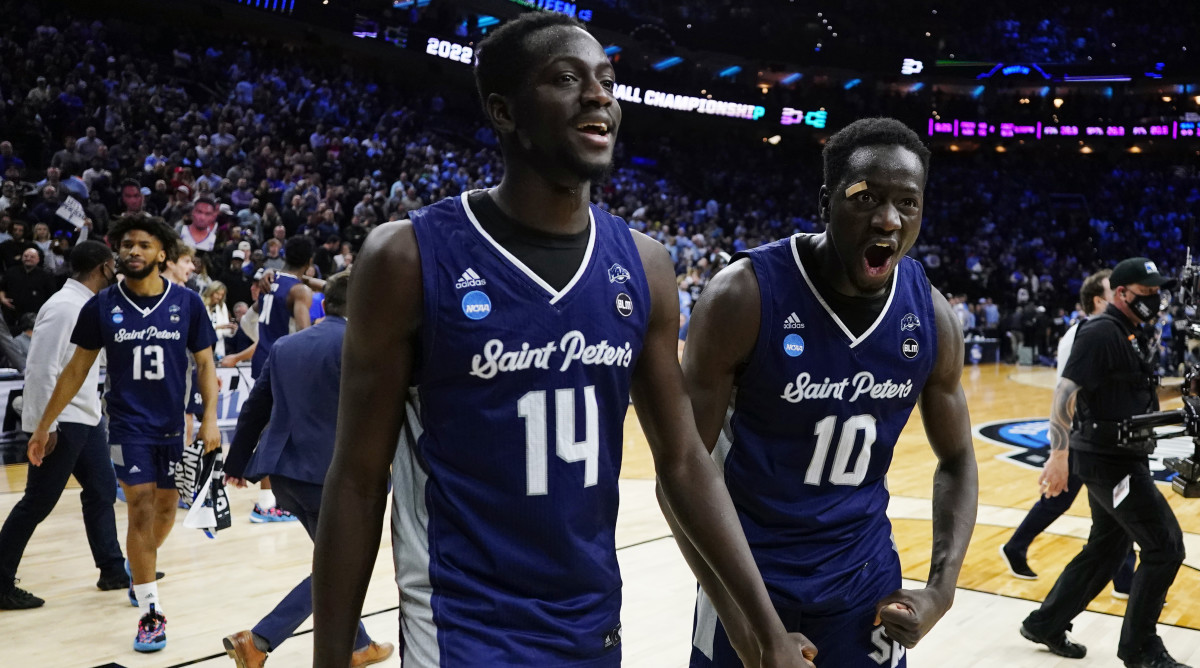 For those among us not particularly well-educated on their patron saints, let this author present some hastily-researched fun facts about Saint Peter. He is recognized as the traditional first pope of the Roman Catholic church. He was a fisherman, and the patron saint of various nautical craftsmen: shipbuilders, fishermen and netmakers. And, if you are in any way affiliated with a college basketball team waltzing deep into March—perhaps, a No. 15 seed bearing his name—it will behoove you to know that Saint Peter, multitalented as he would seem, may also soon condone cutting nets down.

As you may have heard, the Peacocks of Saint Peter’s, the No. 15 seed in the East region, have stolen just about all the thunder there was for the taking in a men’s tourney that, after three rounds has seen three No. 1 seeds bow out, many of its biggest stars erased, and chaos erupt across the bracket, all while the winningest college coach of all time has staved off defeat in the face of retirement. Saint Peter’s improbably toppled heavily favored Purdue on a Friday night that also saw a No. 8 seed (North Carolina) and a No. 10 seed (Miami) advance to the regional finals. Whatever platitudes anyone wants to use to describe how utterly decimated their bracket may be, they apply. It’s nice to believe in miracles, but at this point in the tournament, this author will believe pretty much anything.

At any rate, there are eight teams left, many of which you may have heard of: Kansas (the last remaining No. 1 seed), Duke and Villanova (a pair of No. 2’s), and UNC (surviving what was a down year for the program as recently as three weeks ago) are still around. No. 4 Arkansas and No. 5 Houston, physical teams led by experienced head coaches, took down the tourney’s top two seeds (respectively, Gonzaga and Arizona) on their way here. Miami was a true wild card, escaping USC in the first round, knocking off Auburn in the second, then drawing a fellow low seed in Iowa State, which it handled with poise. Saint Peter’s—a tiny school with a master plan and a healthy dose of self-belief—went through Kentucky and Murray State before wrestling the Boilermakers and star guard Jaden Ivey.

Should we call whatever happens next surprising, or should nothing surprise us at all? That depends on your sense of scale. Objectively, we know Houston can beat Villanova, and Villanova can beat Houston. Jay Wright and Kelvin Sampson are two of the best. Throw the seeds out and enjoy that one. Let’s say Miami, with its plucky guards and well-respected coach Jim Larrañaga, knocks off a Kansas team that watched its offense short-circuit against Providence. Well, these teams deserve to be here. The Hurricanes have lost once in the month of March. Their star guard, Charlie Moore, was a Jayhawk three years ago. They’re playing their best basketball. Don’t confuse an uphill climb with hiking Everest.

Think bigger. Storied rivals Duke and North Carolina have never, ever played each other in the tournament. In Mike Krzyzewski’s final year as coach of the Blue Devils and Hubert Davis’s first helming Carolina, we’re pretty damn close to that happening: one more win for each, and that particular game will take place. After the Tar Heels memorably spoiled Coach K’s final game at Cameron Indoor (and then bowed out too early for a rematch in the ACC tournament), it’s hard to imagine a more seismic story than that. But first, Duke has to beat Arkansas, which has lost three times since Jan. 12, just out-toughed Gonzaga for 40 minutes, and will actively hunt another upset, spoiler or not. The Razorbacks almost certainly won’t care about TV ratings.

And of course, the Tar Heels now draw Saint Peter’s, which could deprive the public of that fated matchup, but also build on one of the greatest Cinderella runs ever. If Coach K decided to retire early Saturday morning, it would only somewhat dwarf this thing in magnitude. Were it not for head coach Shaheen Holloway’s pending departure to Seton Hall, Saint Peter’s might never sniff another early-season buy game again. The Peacocks are the first No. 15 seed to make the Elite Eight, and they seem to be mostly shrugging it off. They may not have entered the tourney with a very large fan base (emphasis: entered), and their resources pale in comparison to the field, but they’re playing nine deep off the bench and straight-up outplaying and outcoaching their opponents. There should be no pressure left on Saint Peter’s to accomplish just about anything, while its more esteemed opponents deal with the psychic weight of an upset.

Somehow, North Carolina’s ride just to get here—which has required a 30-point effort in subsequent rounds from streaky sophomore guards R.J. Davis and Caleb Love—feels slightly less tenable than Saint Peter’s balanced recipe. But the Tar Heels certainly earned their place in gutting out a physical, overtime victory over No. 1 Baylor, then outplaying an experienced UCLA team Friday. They’ve lost three times since Jan. 24 and found a way to make the inevitable chaos work for them. And what, if not that, is this month about?

Whichever outcome you’re pulling for in this enormous cosmic messiness that is March—and let’s be honest, at this point, it probably doesn’t have to do with your office pool—just remember, there’s a pretty good chance it won’t happen. Weird is the new normal. But first, you may want to reconsider Saint Peter, who was, ironically, often called upon for aid against frenzy. And, as the Tar Heels may soon be horrified to learn: He’s also one of the patron saints invoked for foot ailments.