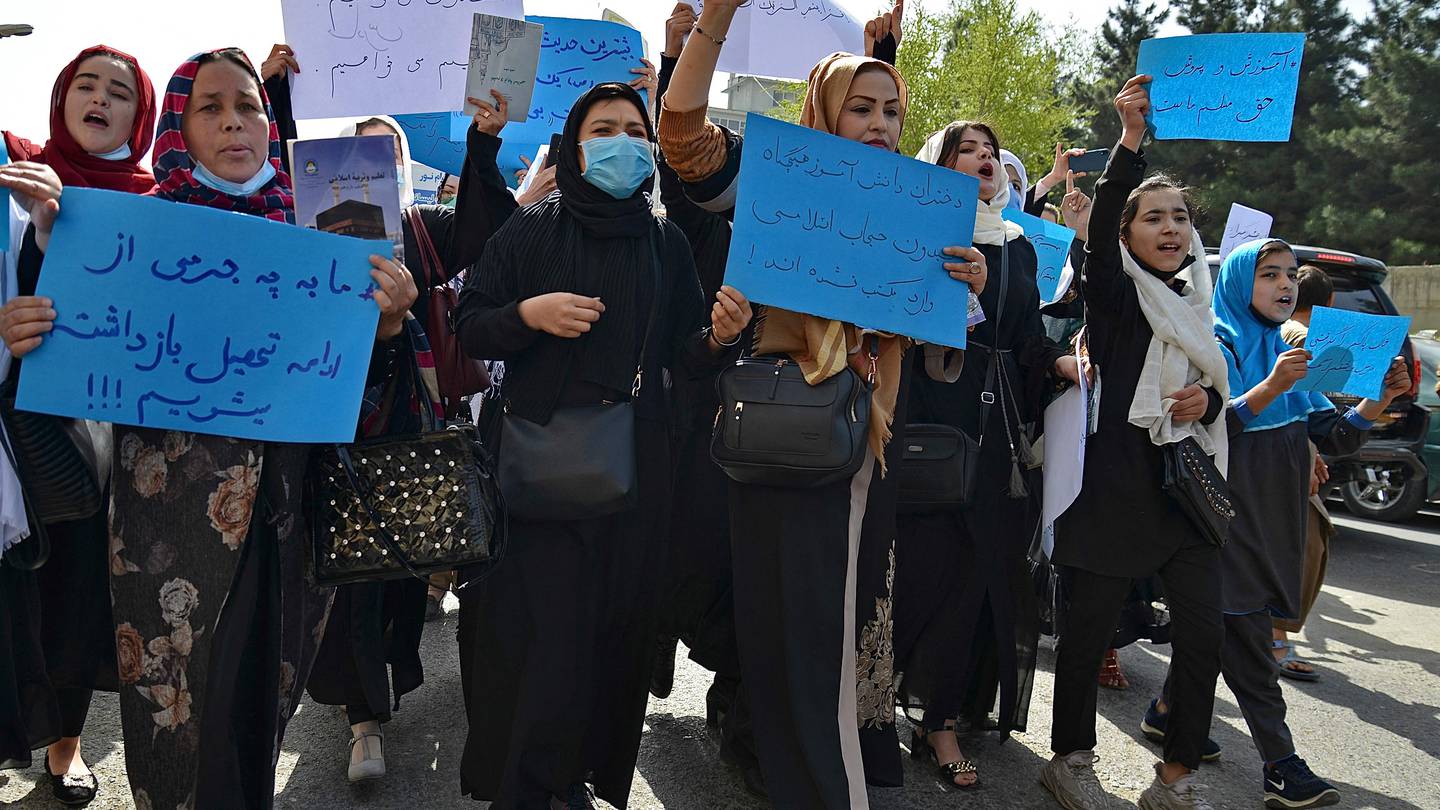 About two dozen girls and women protested in the Afghan capital on Saturday against the Taliban’s decision to shut their secondary schools only hours after re-opening them this week.

Thousands of jubilant girls across Afghanistan had flocked to learning institutions on Wednesday — the date the education ministry had set for classes to resume.

But only hours into the first day, the ministry announced a policy reversal that left youngsters saying they felt betrayed and foreign governments expressing outrage.

“Open the schools! Justice, justice!” the protesters chanted, some of them carrying school books, at a city square in Kabul.

They held banners that said: “Education is our fundamental right, not a political plan” as they marched for a short distance and later dispersed as Taliban fighters arrived at the scene.

The Taliban rounded up the ringleaders of women’s demonstrations after they returned to power in August.

The hardline Islamists have not given a clear reason for going back on their decision to reopen the schools, which followed a meeting of senior officials late on Tuesday in the southern city of Kandahar, the Taliban’s de facto power centre and spiritual heartland.

“Even the Prophet said everyone has the right to education, but the Taliban have snatched this right from us,” said Nawesa, one of the girls at the protest on Saturday.

“The Taliban can not oppress the women of Afghanistan,” said another protester, Laila Basim.

Foreign countries have worked for months on a plan to support the payment of teachers’ wages, while pressuring the Taliban to allow girls to continue their education.

Female foreign ministers from 16 countries said on Friday they were “deeply disappointed” by the Taliban’s decision. Diplomats from 10 countries sounded a similar message at the UN.

“As women and as foreign ministers, we are deeply disappointed and concerned that girls in Afghanistan are being denied access to secondary schools this spring,” the foreign ministers of Albania, Andorra, Australia, Belgium, Bosnia, Canada, Estonia, Germany, Iceland, Kosovo, Malawi, Mongolia, New Zealand, Sweden, Tonga and Britain said in a joint statement.

The Security Council also held a closed-door discussion on the issue at the UN headquarters in New York. Before it started, ambassadors from Albania, Britain, Brazil, France, Gabon, Ireland, Mexico, Norway, the US and the UAE stood together to decry the Taliban’s decision.

“It is a profoundly disturbing setback,” UAE Ambassador and Permanent Representative to the UN Lana Nusseibeh, the current council president, said while reading a joint statement.

Since returning to power on August 15, the Taliban have rolled back two decades of gains made by Afghan women, who have been squeezed out of many government jobs, barred from travelling alone, and ordered to dress according to a strict interpretation of the Quran.

The Taliban had promised a softer version of the hardline rule that characterised their first stint in power from 1996 to 2001.

But many restrictions have been imposed, if not at the national level then applied locally at the whim of regional officials.

Some Afghan women initially pushed back against the Taliban’s curbs, holding small protests to demand the right to education and work.

But the Taliban soon rounded up the ringleaders, holding them incommunicado while denying that they had been detained.

Since their release, most have gone silent.

With reporting from agencies