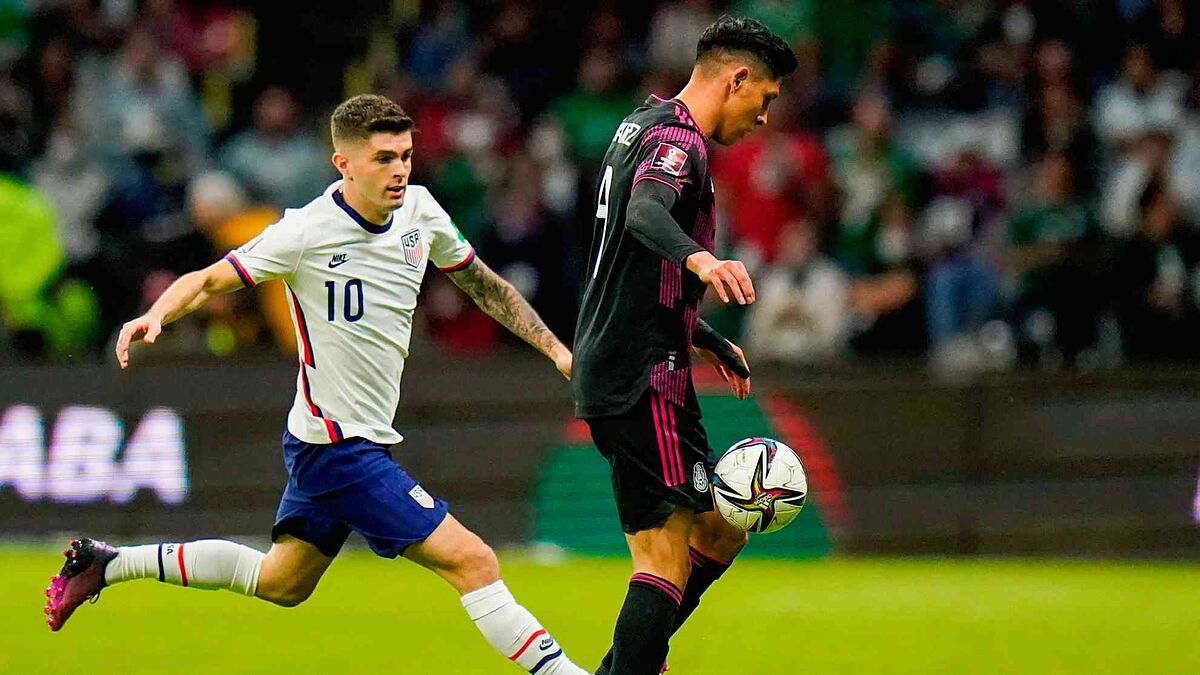 Mexico and the United States national teams will finally face each other this Thursday, March 24 at the Azteca Stadium, in the match corresponding to the 12th matchday of the Final Octagonal of the Concacaf Qualifiers for the Qatar 2022 World Cup.

89′ Vega tries to deceive the referee

Alexis Vega had passed Jordan Morris but he jumped without contact in the box, he was well reprimanded by the referee for trying to cheat.

78′ We can’t believe what happened to Lozano

Hirving Lozano was in front of Zack Steffen’s frame and took an extremely powerful shot that would have blew up the Azteca Stadium, but the American goalkeeper made a great save.

72′ Blooper by Jordan Pefok in the box

Jordan Pefok had the best chance of the game, but he simply hit the ball wide of Guillermo Ochoa’s open goal.

In a controversial play, the match referee correctly did not award a play as a penalty where Walker Zimmerman did not touch Ral Jimnez in the area, who fell in the box.

Tim Weah and Ricardo Pepi left the field, while Giovanni Reyna and Jordan Siebatcheu are already on the pitch at the Azteca Stadium.

The Napoli player, Hirving Lozano, made a cut to the center of the area, kicked with his right foot and his shot went high off Zack Steffen’s goal.

48′ Guillermo Ochoa is not human, he saved El Tri again

Once again Guillermo Ochoa saves El Tri from the United States’ first goal, Christian Pulisic hit him with an outside, but the America goalkeeper is a wall.

46′ Start of the second half

The beginning of the second half generates the ovation of the 50,000 fans in the Azteca Stadium, the two teams look for victory.

The referee of the match whistles the end of the first half that has not had goals in the Azteca Stadium.

Wolverhampton striker Raul Jimenez missed a bicycle kick that would have blown up Estadio Azteca like he did in 2013 against Panama, but he couldn’t connect the ball.

Again a foul on Ral Jimnez generates a yellow card against Team USA, this time Timothy Weah was sanctioned.

34′ Miracle! Guillermo Ochoa took a goal away from Christian Pulisic

The Chelsea player was already scoring the first goal of the game with a shot from his left foot, but goalkeeper Guillermo Ochoa simply made a save worthy of the World Cup.

Sevilla player Jess “Tecatito” Corona had a clear scoring opportunity if he had received Charly Rodrguez’s pass well, but he didn’t and the score remains 0-0.

Edson Alvarez is booked for a slide to stop an advance by Christian Pulisic after a terrible mark by Hector Herrera.

13′ A save by Guillermo Ochoa!

Spectacular counterattack by the United States that almost ended in a goal, great shot by Yunus Musah to the corner of the goal and goalkeeper Guillermo Ochoa sent it to the corner kick.

Atlanta United defender Miles Robinson had to stop Raul Jimenez with a tackle and is the first player booked in the match.

4′ The first danger is for Mexico

Filtered pass for Charly Rodrguez (Mexico) who is penalized for being offside by centimeters, but El Tri has already threatened Team USA.

Kicking off the match at Estadio Azteca with 50,000 fans, Mexico and the United States are already playing a vital game in CONCACAF qualifying.

Mexican goalkeeper Guillero Ochoa sent a message before the game that was heard throughout the Azteca Stadium asking them to behave properly.

All 22 players are on the pitch

The teams from Mexico and the United States are already stepping on the grass of the Azteca Stadium and singing the national anthems in the “Clsico de la Concacaf”.

Problems at the entrance to the Azteca Stadium

Mexico implemented a Fan ID system for those attending the Azteca Stadium, but according to a report by Len Lecanda of ESPN, the system fell and the entrance is in chaos, they are already letting people in without the Fan ID.

Reggie Cannon out due to COVID-19

American defender Reggie Cannon is unable to participate at the last minute because he tested positive for COVID-19.

The American fans present at the Estadio Azteca

The famous Outlaws supporter are present to support the United States that is looking for the first victory in its history in an official match at the Estadio Azteca.

Mexico lineup against the United States

All the information prior to the match, as well as the most important actions on the field between El Tri and Team USA can be followed live on Marca English.

More than just three points are at stake for Mexico and the U.S.

Both Gerardo Martino‘s team and Gregg Berhalter‘s players are looking for a victory to ensure their qualification to the next World Cup. Tied on 21 points (although Team USA has a better goal difference), the two teams are behind CONCACAF playoff leaders Canada.

Mexico is unbeaten at home in the Final Octagonal, but in its last match against the United States on November 12, Berhalter’s team won 2-0 with goals from Christian Pulisic (’74) and Weston McKennie (’85) at TQL Stadium in Cincinnati.

Berhalter and Martino, must win

The coaches of both teams understand the importance of this game, which if won would give a place in the Qatar 2022 World Cup to the team that succeeds.

“Yes (it is the most important game), I think the Panama game was very important because it was the last of the three-game combo and there was a need to win it. Both the Panama game and this one, we treat them as games that can be worth a World Cup,” Martino said.

The U.S.’s three wins in its last games against Mexico lifts the spirits of its players, which makes them believe in a historic triumph at the Azteca Stadium.

“When you look at our team after those three games we won, the guys have a lot of confidence, but our record there (Azteca) is horrendous, but I’m confident in what the team has matured after those three games…. We know that the goal is to qualify for the World Cup and it is a great opportunity for this team,” Berhalter told the press.

How to watch Mexico vs U.S.