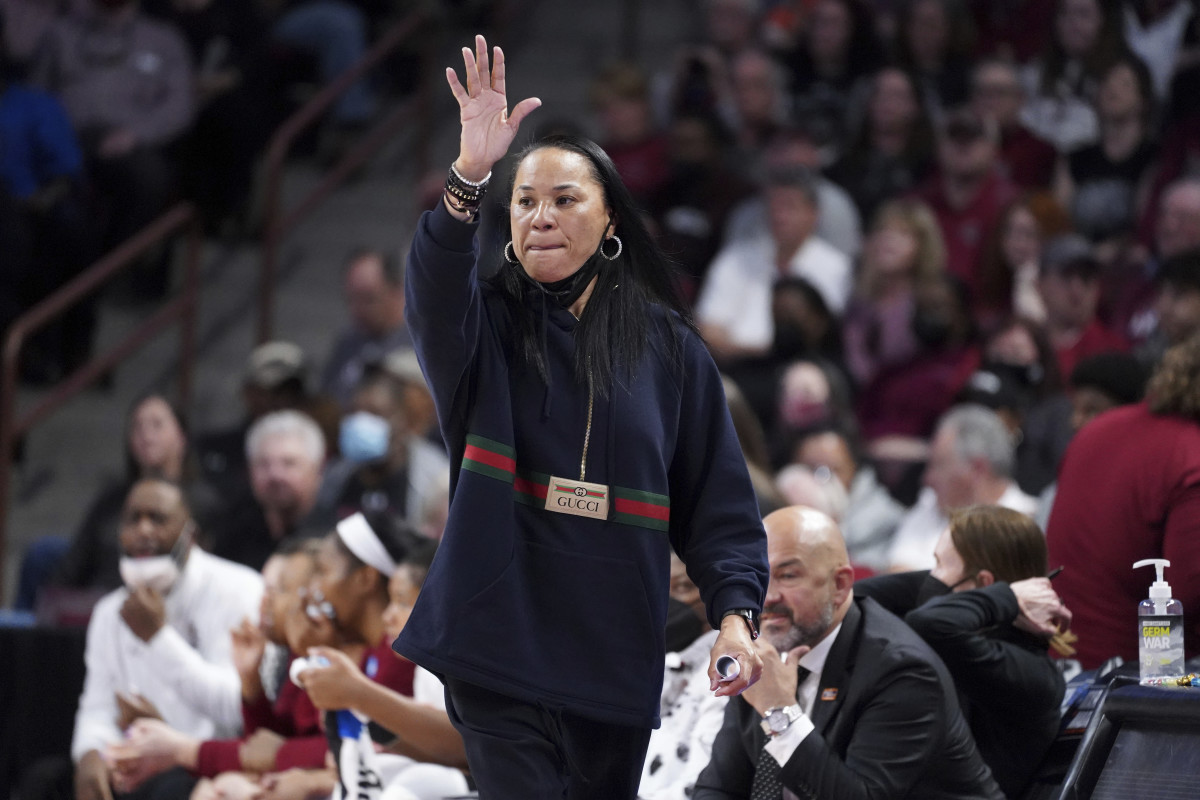 “Favorite” is an understatement for South Carolina. The program, which has been ranked No. 1 from preseason to Selection Sunday, breezed through the first two rounds of the NCAA tournament. A loss at any point this weekend would be not just an upset—it would be an astonishing one.

Is there any chance the Gamecocks don’t make it to the Final Four in Minneapolis? Yes, and it’s more than you might think.

This has always been a team built on its defense. It’s the best in the nation on just about every important defensive metric—no squad holds its opponents to a lower effective field-goal percentage or allows them to grab fewer rebounds—and that has held as true as ever in March. But on offense? There’s been more to critique lately for South Carolina.

It was visible in its surprising loss to Kentucky in the SEC tournament, where it failed to execute in the clutch, particularly with free-throw shooting. More worryingly, it was visible in the Gamecocks’ second-round win against Miami last weekend, when they shot less than 30% from the field for their worst shooting performance of the year.

It wasn’t surprising that the first question for coach Dawn Staley in her press conference Thursday—before all the expected fanfare about making her eighth consecutive Sweet 16 appearance—was focused here: What are you doing to work on your offense?

“We’re getting a lot of shots up and we’re breaking some of our offenses down, so our players feel comfortable. Then we’re just doing us. We’re working our offenses. Five on O, just creating a rhythm,” Staley said. “But we’re also just letting our players know you just got to put the ball in the hole. We don’t want them gun-shy. We want them to be able to shoot the shots that they naturally take and allow our rebounders to do their job.”

It’s not that South Carolina is in trouble. (Again, this defense is so good, they still won by double digits against Miami!) But the pathway for any potential upset is clear: It will run through this offense. One particular area of focus has to be ball movement. Against Miami, the team recorded just nine assists to 16 turnovers, and it can’t let that happen again.

“I’ve just been emphasizing sharing the ball. I think that’s going to be super important for us, and that’s a tangible for us to make sure we’re sharing the ball, seeing our teammates, seeing the weak side of the floor,” guard Zia Cooke said Thursday. “Just making it easier for ourselves when it comes to scoring and not making it hard.”

The Gamecocks have their hardest test of the tournament yet Friday against a very-well rounded North Carolina squad. If they win, they’ll move on to the Elite Eight to face either No. 3 Iowa State or No. 10 Creighton. And if it’s Iowa State? It’s worth noting South Carolina is merely very good, rather than truly great, at stopping the three-ball—it’s the one area of defense where the squad is anything other than elite. The best three-point shooting team in the country is … Iowa State.

Yes, South Carolina is the favorite here, and it should be. (That’s true against UNC and just as much so against whichever team the Gamecocks might have the opportunity to face afterward.) But there are no guarantees here—even for a squad this good.

• No. 3 Purdue vs. No. 15 Saint Peter’s (7:09 p.m. ET, CBS): The Peacocks have been the tournament’s best story. Now, they’ll try to stop the best player they’ve faced so far in Jaden Ivey, who has turned in consecutive strong performances and will push Saint Peter’s to the brink with his speed. The seeds would suggest this could get ugly, but you know you’re tuning in for the intrigue.

• No. 4 UCLA vs. No. 8 North Carolina (8:39 p.m. ET, TBS): Two bluebloods meet unexpectedly in the Sweet 16 as the Tar Heels look to spoil the Bruins returning to the Final Four for the second straight season. North Carolina will have an edge on the interior, but UCLA boasts tourney experience. If star Jaime Jaquez is healthy and ready to go, this should be a close one.

• Arizona, transformed: Tommy Lloyd had never been a head coach at any level before joining Arizona last year. But, as Greg Bishop writes, it seems his unique path through Spokane and around the world prepared him for this moment and the Wildcats’ current tournament run.

• Re-ranking the women’s Sweet 16: None of our writers saw the upsets that rocked the Greensboro and Wichita regions coming, with No. 10 seeds Creighton and South Dakota crashing the Sweet 16 after taking down Iowa and Baylor, respectively. Can either underdog go to the Elite Eight or beyond? Our gurus reset their brackets.