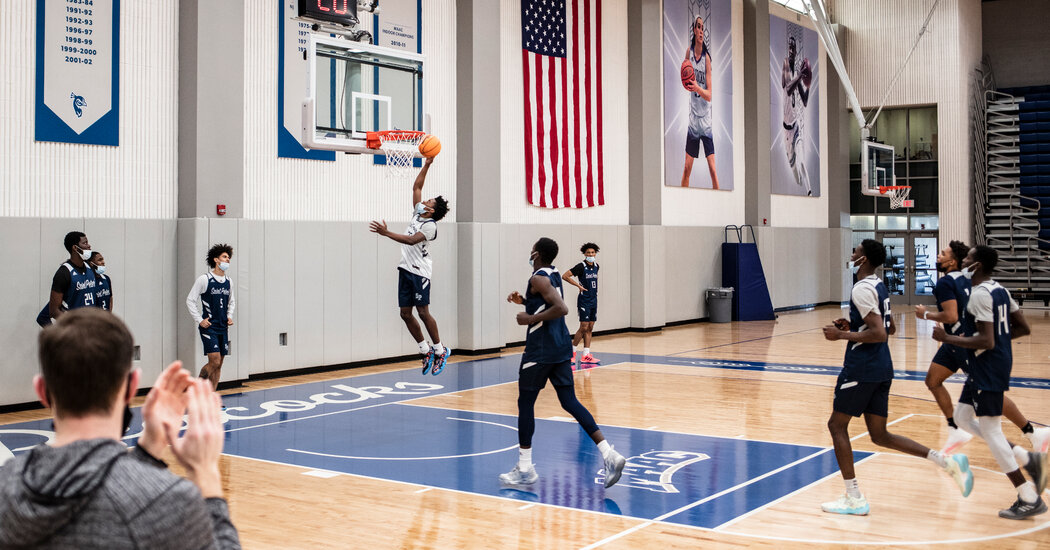 JERSEY CITY, N.J. — In 1872, four years before construction began on the Statue of Liberty, St. Peter’s University welcomed its first class, all male and mainly sons of Irish immigrants. Once the statue was complete, the elegant embodiment of the American dream stood with her back to Jersey City, a snub deeply ingrained in the gritty ethos of the city and the small liberal arts school that old-timers still refer to only as “the college.”

Nearly 150 years later, the coed Jesuit university continues to educate first-generation strivers. About 48 percent of its 2,134 undergraduates are Latino; 18 percent are Black; and 8 percent are Asian. Students speak nearly 40 languages and come from families with a median income of $55,300.

Most commute to and from the university every day. The others, roughly 25 percent of undergraduates, live on a two-block-square campus that is anchored by a brick-and-stone quad and straddles one of the busiest traffic arteries of the city, New Jersey’s second largest.

This is what makes the glass-slipper journey of the No. 15-seeded St. Peter’s basketball team in this year’s N.C.A.A. men’s basketball tournament particularly compelling.

“It’s not just a Cinderella story,” said Senator Robert Menendez, Democrat of New Jersey, a son of Cuban immigrants and the first person in his family to earn a college degree (from St. Peter’s) in 1976. “It’s David versus Goliath.”

On St. Patrick’s Day, St. Peter’s dispatched Kentucky, a No. 2 seed, in overtime, stunning basketball fans everywhere and dancing its way into the hearts of a country desperately in need of a diversion.

The team delivered last weekend by beating Murray State, a No. 7 seed, 70 to 60.

And on Friday, for the first time in its history, St. Peter’s is heading to the Sweet 16. Its opponent? Purdue, a Big Ten school 16 times its size and a No. 3 seed.

“It’s the story of the underdog,” said Tom Weatherall, a 1991 St. Peter’s graduate who grew up in Jersey City and worked in the university’s admissions and development offices for six years. “They represent determination and grit.”

Mr. Weatherall now runs Make-A-Wish New Jersey, a branch of the national nonprofit. Its castle-shaped headquarters in central New Jersey has been lit up in “peacock blue” every night this week.

Dive Deeper Into the N.C.A.A. Tournaments

If only temporarily, the wins have left New Jersey overflowing with a pride that even its star turn in “The Sopranos” and its claim as Springsteen’s maker and muse never could. “It’s a blue-collar, lunch-pail kind of fight,” Mr. Weatherall said of the team’s competitive style.

A banner hanging from the front of McGinley Square Pub, a short walk from St. Peter’s, captured the statewide euphoria: “Miracle on Montgomery St.”

“This is up there with the Soviets losing to Team U.S.A. in ice hockey,” said Angelo Hatzipetrou, the pub’s owner, who takes the sign down each night, confident it could be swiped as a souvenir. “This is Tyson getting knocked out by Buster Douglas.”

At Departed Soles, a brewery in Downtown Jersey City, customers are lining up to buy the commemorative four-pack of Busted Bracket, an amber lager named in honor of the 1.53 percent of March Madness brackets that survived St. Peter’s two upset wins.

This past week, Emilio Ortiz, a 20-year-old finance major who serves as the team’s mascot, stopped Eugene J. Cornacchia, the president of St. Peter’s, near the quad. He held out his phone to show off his latest video interview with a network news host and then spoke of the tournament experience in general.

“What this journey has brought to me is an extreme message: It doesn’t matter what school you go to, what company you go to. All that matters is, like, the heart that goes into it,” said Mr. Ortiz, who was raised in Jersey City.

“And that’s what the boys are showing,” said Mr. Ortiz, who lives on campus and works as a resident assistant in addition to his peacock duties. “We’re not a big-name school. They’re just giving it their all.”

Student tickets to the game against Purdue, on sale for $10 each, sold out in under three minutes. Fans hoping to witness history tried calling in favors from anyone with connections to the school, the team or its now-famous coach, Shaheen Holloway. By Thursday evening, single tickets were starting at around $300 on StubHub.

The last time the St. Peter’s men’s basketball team made a run like this was in 1968, when it toppled Duke University, a known hoops powerhouse, in a later round of the National Invitation Tournament. Tom Mac Mahon, a walk-on guard who played on the 1968 team, said he planned to travel from Florida to be at Friday’s game.

“The whole thing changed my life,” said Mr. Mac Mahon, the former chief executive of the testing facility LabCorp, whose donations to St. Peter’s paid for a new campus center and a renovation of the Run Baby Run Arena, where the men’s basketball team practices and plays.

“What I accomplished in my life — it started with the education I got at St. Peter’s,” he said. “And I’ve never, ever forgotten it.”

It’s unclear whether the bump offered by the school’s newfound fame or its trending social media hashtag, #StrutUp, will boost enrollment, which fell by about 5 percent during the pandemic.

Dr. Cornacchia, the university president, said he was relieved that construction on a new dorm would be finished in time for next semester, should predictions of an admissions uptick prove accurate.

Messages of support have flooded in from across the country, he said, and as far away as Europe and Japan.

“I have been just kind of knocked over by the amount of publicity we have received,” Dr. Cornacchia said. “It’s priceless.”