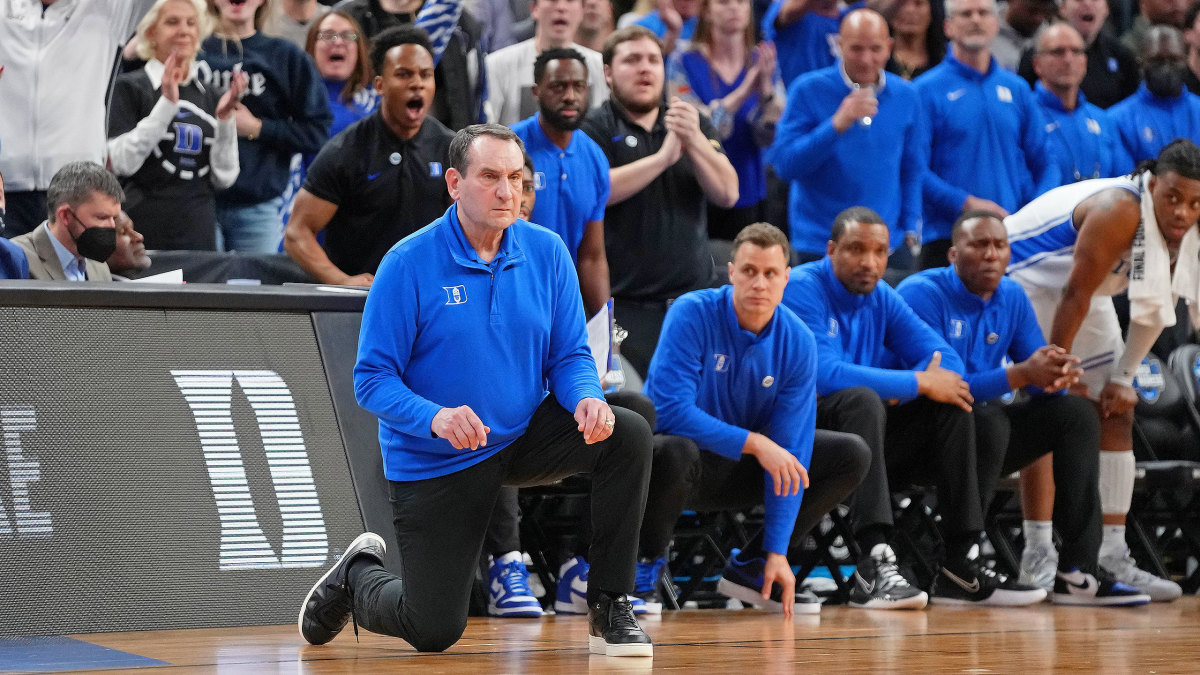 SAN FRANCISCO — With 4.8 seconds left and Texas Tech finally subdued, Mike Krzyzewski turned to the Duke fans behind his bench and threw a right fist in the air. It wasn’t exactly a haymaker swing, but who cares. At age 75, after staring career-ending elimination in the face for the second successive game, the Duke legend had lived to punch another day.

He’d coached a floor-slapping, defense-changing gem of a victory, delaying his retirement for at least two more days. The most captivating storyline of this NCAA tournament keeps going.

K’s coaching endgame has changed shape and tenor several times this month alone. It was a burden for his young team at the beginning of the month, one that appeared capable of crushing them beneath its weight after flopping late on March 5 against North Carolina. Then, after making an array of clutch plays to escape Michigan State in the second round of this tournament, there was an element of freedom granted—the Blue Devils had at least avoided a truly disappointing ending.

Now, they’ve moved on to something truly thrilling, something captivating, something that has become an engrossing March Madness plotline. They are verging on the storybook ending that eluded them during Krzyzewski’s last game in Cameron Indoor Stadium. They are 40 minutes away from a fairytale Final Four, rising to a moment that was foreseeable in theory months ago but now is taking on tangible form.

In point of fact, the old coach is doing a great job, too. Duke 78, Texas Tech 73, was Coach K’s 100th NCAA tournament win—by far the most in history—and it was some of his better work. This was strategy, preparation and passion coming together.

One line on the Duke scouting report against Texas Tech read thusly: “12 defense if necessary.”

“And it was necessary,” Krzyzewski said afterward.

Duke’s “12 defense” is a 2–3 zone, something the avowed man-to-man adherent rarely uses—according to Synergy Stats, the Blue Devils have played zone for 4% of all their defensive possessions this season. And they really didn’t practice before this game; Krzyzewski said he and his staff “just mentioned it” in the team walkthrough a few hours before tipoff against the Red Raiders. That was about it.

It was, essentially, the Break Glass In Case Of Emergency contingency plan for this game.

Well, this was an emergency. Duke’s tournament life and Coach K’s epic career hung in the balance, trailing the ferocious and fearless Red Raiders 46–44 with 14 minutes remaining. A Duke team that has had some pronounced defensive lapses in recent weeks needed to find a way to get stops, and to take some edge off the physical pounding Tech was delivering. That’s when Krzyzewski dusted off and implemented his “12 defense,” which reduced the number of high-contact screens.

“It kept out the amount of physicality because they were wearing us down,” Krzyzewski said. “So the zone gave us a chance to kind of dance around the ring a little bit instead of being in a corner.”

Spared some body blows, the Blue Devils had enough left to finish a thriller that brings the retiring 75-year-old’s Last Dance to within one game of New Orleans. His team made a jaw-dropping succession of shots—its last eight field goals all found the bottom of the net, as they shot 71% in the second half. That’s a preposterous number against what had been the best defensive team in the country. It’s so preposterous that nobody has shot that well for a half against the Red Raiders in the last seven seasons.

This was a triumph that showcased three of Krzyzewski’s gifts: his adaptability, his player empowerment and his unparalleled recruiting.

Going zone at a crisis point in a win-or-go-home game requires some stones, but also a willingness to bend to the situation and consider an alternative approach. This is a coach who was a late adopter of one-and-done recruiting, then used that to fuel the last of his five NCAA championship runs in 2015. That team also struggled defensively and also employed a zone in the tournament to survive and advance.

The player empowerment piece came with 2:54 remaining and Texas Tech beginning to figure out the Duke zone for the second time. Paolo Banchero hit a three-pointer from the top for a 69–68 lead, and Krzyzewski called timeout. What followed was a caucus of sorts, according to the head coach.

It had been a high-level chess match between Krzyzewski and Tech coach Mark Adams to that point, with the “12 defense” creating enough stops for the Devils to take the lead, then Tech countering with cuts and drives through the interior, then Duke countering again by shrinking its zone and forcing the Red Raiders to make perimeter shots. They obliged by scoring on four of the next five possessions.

At that point, Krzyzewski says, his team asked him to switch back to man-to-man. Asked who requested the switch, K responded: “It was like a Catholic boys’ choir. It was a chorus. They all said it. They all said it, and they said it with enthusiasm.”

That may be true, but from courtside this looked like a Krzyzewski decision after consultation with his staff. It stands to reason that’s why he called the timeout to begin with, to reconsider his defense with the zone starting to spring leaks. Perhaps he presented the option to the players and they affirmed it.

Regardless, Krzyzewski is the man who popularized—and may well have invented the player huddles every time free throws are being shot. He’s always championed player communication and leadership, and if his guys did in fact suggest the defensive shift then this is another chapter in that part of his legacy.

That shift back to man was punctuated by a signature Duke gesture for decades— slapping the floor at the beginning of a defensive possession. That happened with 1:08 left, and it wasn’t just the players in the game doing it. So did everyone on the bench, starting with the boss himself.

“What the hell, why not?” Krzyzewski said. “Our guys really wanted that because it’s kind of like, cross the bridge to the brotherhood. They can now say they did that.”

The third element: Coach K has so often over the decades acquired the most talented players. He did Thursday night, specifically freshman Banchero and sophomores Jeremy Roach and Mark Williams. Each was incredible at varying points in the game’s latter stages.

Banchero, who is in the mix to be the No. 1 NBA draft pick this summer, was sublime in scoring 22 points and handing out four assists against Tech’s barbed-wire defense. The 6’10”, 250-pounder drove the ball with skill and daring, and popped a pair of big threes. He found The Zone, that athletic nirvana where everything elevates and talent takes over without conscious thought.

“I’ve never played in a basketball game like that,” Banchero said. “When you are out there, it’s not like you’re even thinking. You’re just playing to win, and you’re playing extremely hard.”

Given his 75 years of perspective, Krzyzewski’s description was better: “Paolo did a couple of things tonight that he has never done in his life, and he did it instinctually. He just wanted to win so badly, and it was so beautiful to see. …I t’s like when great players just go. They just go, and the moment and the need take them to a place that a great player would love to be in, and that’s where he was. I feel—I’m just so happy that I was there for that moment with him because it’s his. It’s his, but it benefited all of us.”

Roach had his own moment—just as he did against Michigan State in the second round. A complementary part for most of his two years at Duke, Roach has risen to game-changing playmaker in the latter stages of the last two games. He followed a 15-point performance against the Tigers with another one against Texas Tech, making three big baskets in the final four minutes—none of them easy.

“The resolve of Jeremy Roach was incredible,” Krzyzewski said. “His drives against that defense were so strong, so determined.”

And Williams continued his sophomore flourish, providing a huge interior presence at both ends of the floor. The 7-footer had 16 points, eight rebounds and three blocks, with no play more scintillating than his vicious dunk after a feed from Banchero with less than six minutes to play.

All told, Duke has the pieces to deliver Krzyzewski his 13th Final Four—he already has the record for the most in the men’s game, and this would put him farther ahead of his peers. There is 40 minutes of Arkansas standing between him and New Orleans, so it won’t be easy. (The Razorbacks delivered Coach K a bitter defeat in the 1994 national championship game.)

But this emotionally freighted journey through the latter stages of a legend’s career is no longer a burden, no longer in danger of being a disappointment. Duke has fought through all that with some exalted basketball, to a place where the joy is clear on Mike Krzyewski’s face. They’ve come a long way since March 5, and may yet have further to advance.