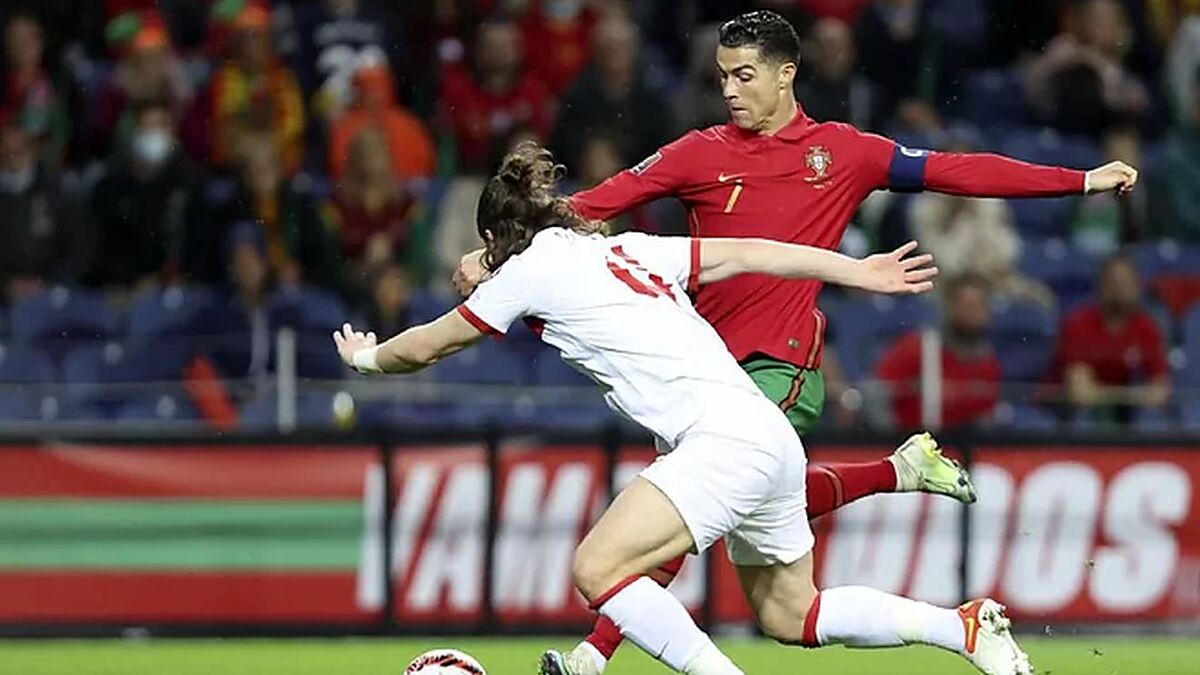 The last few places at the 2022 World Cup in Qatar are about to be decided and there is an especially interesting playoff taking place in Porto, as Portugal host Turkey. Only one of these teams can progress from this World Cup playoff semi-final, setting up a potential final showdown with Italy. Cristiano Ronaldo and co. will be determined to make it to Qatar, while Euro 2020 dark horses Turkey will be just as motivated. On this live blog, we’ll be covering all the action from what should be a fascinating contest.

This is the very beginning of our live blog for the 2022 World Cup playoff between Portugal and Turkey. All of the updates will follow on below, with the ones nearest the top the most recent.

Portugal are 2-0 up as the half time whistle sounds, thanks to goals from Otavio and Diogo Jota. Cristiano Ronaldo has had chances too, with Portugal the far better side over the opening 45 minutes.

It’s a lovely move from Portugal, as they go 2-0 up. They withstood the Turkish fightback and now Otavio sets up Diogo Jota for the home side’s second goal of the night, with the Liverpool man heading in the cross.

Just as a neat ball was being played into the path of Cristiano Ronaldo, the No.7 slipped at the worst possible time. He can’t believe it, as he was getting ready for a first-time volley.

Portugal have a freekick up the other end and Cristiano Ronaldo gets on the end of it, heading just wide. It wouldn’t have counted anyway, though, as he was offside when the ball was played in.

Minute 26: Portugal give it away and Turkey almost take advantage

It’s all Turkey right now and Portugal look rattled. Diogo Dalot gives it away inside his own half, allowing Yilmaz a shot at goal. But, he misfires well off target.

After being overrun for the opening moments of this game, Turkey have now responded and they’ve responded well. They’ve had two chances in a row, one for Under and one for Kutlu.

Portugal have been dominating so far and they take a deserved lead. It’s Otavio who turns it in, after doing some nice work to set up a shot for Bernardo Silva, that hits the post. Otavio himself then turns in the rebound for a 1-0 lead.

What a chance that was for Portugal! They have a freekick from out wide and it reaches Diogo Jota, who gets on the end of it but then fires wide from just a couple of yards out.

Celik suffers a blow to the head and has to go off for some treatment. That halts Portugal‘s bright start for a moment, but they’ll surely come back once play gets up and running again.

Right at the start, Cristiano Ronaldo has a chance for Portugal. A cross comes in from the right and the striker almost gets on the end of it. That was an early warning for Turkey.

Here we go then! We’re underway at the Estadio do Dragao, for Portugal vs Turkey in the European World Cup playoffs. Only one team can advance to a final against Italy or North Macedonia, so we’re about to find out who.

It’s almost time for this huge Portugal vs Turkey World Cup playoff. We’ll be covering it right here on this live blog and you can follow along with us. So, stay right here!

19:05 GMT: Daniel Siebert is the referee

The referee for tonight’s Portugal vs Turkey match is Daniel Siebert, from Germany. He is a rising star in the refereeing world and took charge of three matches at Euro 2020 last summer.

We also have the Turkey starting XI for this World Cup playoff, which is: Cakir; Kabak, Soyuncu, Demiral, Kutlu; Celik, Kokcu, Calhanoglu, Akturoglu; Under; Yilmaz.

18:35 GMT: The Portugal line-up is in and Cristiano Ronaldo starts

This Portugal vs Turkey match is taking place at Porto’s Estadio do Dragao, and the stage is set. A special atmosphere is expected as Portuguese football fans unite to cheer their team towards the World Cup.

17:40 GMT: Who does the winner of Portugal vs Turkey play?

This match is only a playoff semi-final, as there will be another playoff after this one for the spot at the World Cup. So, the winner of Portugal vs Turkey will then play the winner of Italy vs North Macedonia for the right to go to Qatar. That could be a very tasty one.

16:50 GMT: Where to watch Portugal vs Turkey on TV and streaming?

16:30 GMT: What time does Portugal and Turkey’s World Cup playoff kick off?