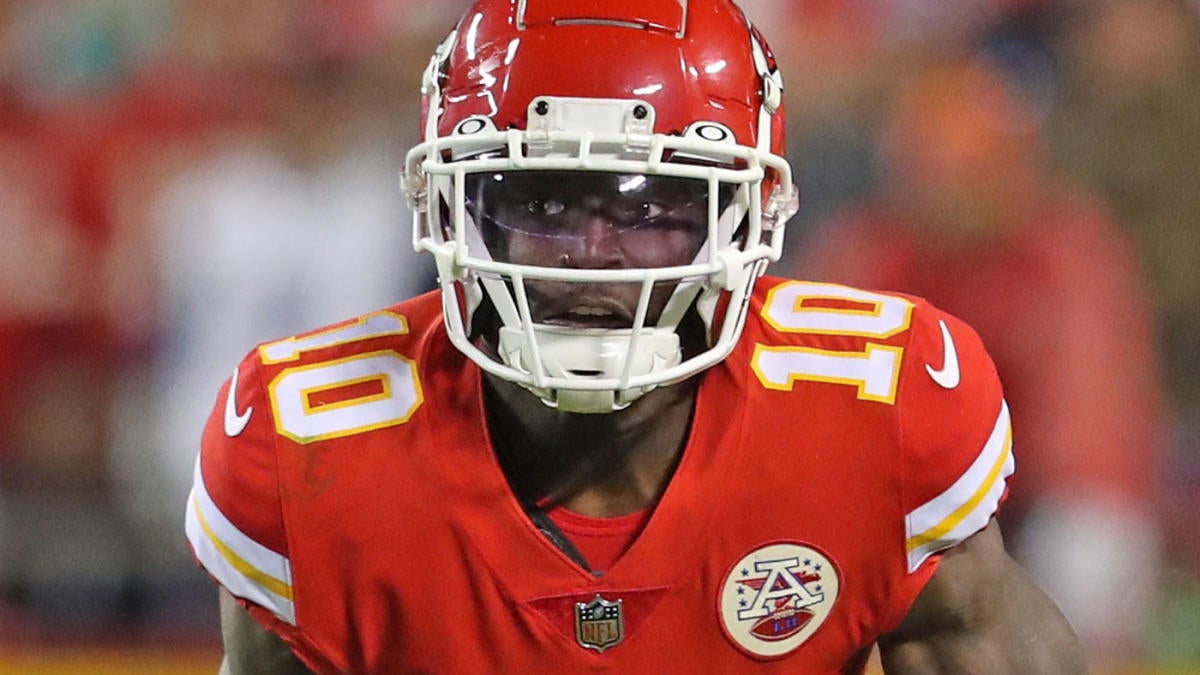 The Kansas City Chiefs sent shockwaves through the NFL on Wednesday when they decided to send Tyreek Hill to the Miami Dolphins in exchange for a boatload of draft picks.

The trade means that one of the most electrifying players in the NFL is now out of the AFC West. If the Broncos and Chargers are looking for someone to thank for Hill’s exit out of the division, they might want to start with Las Vegas, because it appears the Raiders unwittingly played a huge part in why contract talks broke down between Hill and the Chiefs.

According to Hill’s agent, Drew Rosenhaus, talks with the Chiefs started to fall apart after Davante Adams landed a five-year, $142.5 million deal following his trade from Green Bay to Vegas.

Hill’s goal was to be the highest-paid receiver in the NFL and that meant topping the deal that Adams got, which was worth $28.5 million per year.

“The bottom line is he was in the last year of his contract,” Rosenhaus told “The Joe Rose Show with Zach Krantz” on WQAM in Miami, via Audacy. “We had actually worked out a restructure that the Chiefs had wanted a week before, and it really looked like we were going to work toward a contract extension. There was even a report that we were close to a deal, that was inaccurate, but we were working on it. Then the Adams deal really flipped everything upside down. The Chiefs, I think they had the foresight to see that Tyreek was in the last year of his contract and we weren’t going to take a deal that wasn’t better than Adams, so they recognized this would probably be their last year with Tyreek, and this was their opportunity to potentially rebuild at that position.”

The Adams trade went down on March 17 and less than a week later, the Chiefs realized there was no way they were going to meet Hill’s asking price. As Rosenhaus said, the Adams deal “flipped everything upside down.” Before that deal happened, the Chiefs and Hill seemed to be on their way to getting something done.

“At the end of the season, I started conversations with the Chiefs on a contract extension, and it really was heading in the direction of slowly but surely working out a new deal for Tyreek,” Rosenhaus said. “And then the Davante Adams trade got done and Adams got a record-setting contract and I immediately reviewed that contract and I spoke to the Chiefs and had a very positive conversation with them. (I said) that this should be the market for Tyreek and if it wasn’t then the right thing to do would be for everyone to benefit, which would be for the team to have an unprecedented trade and for Tyreek to go to a team that would be willing to make him the highest-paid receiver.”

In the end, the Dolphins ended up sending five draft picks to Kansas City in exchange for the explosive receiver, including a first-rounder. As part of the deal, the Dolphins also have Hill a new four-year contract worth a total of $120 million ($30 million per year).

“The Chiefs, they got a lot more in value than even the Packers did for Adams,” Rosenhaus said. “The Chiefs got a lot and the Dolphins got a guy who can do it all.”

The irony here is that Hill likely won’t end up earning all the money in his contract. The final year of Hill’s deal will pay him $43.9 million, but the money for that season isn’t guaranteed, so it’s highly unlikely he’ll ever see that. If you take out that year, it’s essentially a three-year deal worth $75 million (You can see the full details of the contract over at Pro Football Talk by clicking here).

Of course, the deal Adams received is pretty similar. The receiver’s contract with the Raiders is closer to a three-year, $67.5 million contract since the final two seasons — worth $71.29 million — aren’t guaranteed (You can see the full details of Adams’ contract over at Pro Football Talk by clicking here).

No matter how you spin it though, Hill got a huge raise that the Chiefs weren’t willing to pay even though it was basically the same amount of money that the Raiders were more than happy to give to Adams.