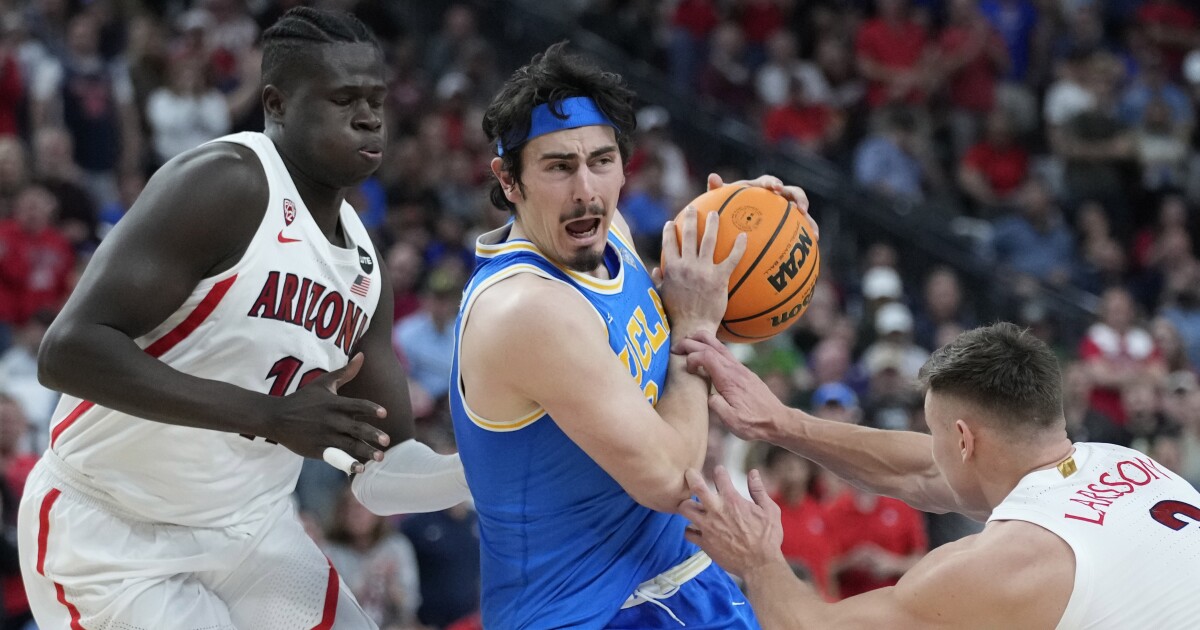 The animated voice belonged to a freshman guard who had never started and rarely contributed before that day, going scoreless in four of his first six college games.

He announced to his teammates, in full-throated terms, that they needed to compete. Be more physical. Rebound. Do whatever it took to beat Michigan State.

“I mean, I just really want to win more than anything,” Jaime Jaquez Jr. said in a breezeway outside the Lahaina Civic Center in November 2019 while explaining his spontaneous speech during UCLA’s game at the Maui Invitational. “I guess wanting to win is my competitive fire and I was just born with it.”

Right, there was that lineage to consider.

His father, who doubled as his youth coach, did not spare him from the harsh critiques he might hear at higher levels, preparing him for the possibility of playing for someone like the fractious Bob Knight. His mother, once an All-American at Concordia University in Irvine, was known for never backing down, players from the men’s team asking her to join them for pickup games.

His grandmother opened a successful business, Petula’s Hair and Nail Salon in Camarillo, despite not knowing any English when she emigrated from Mexico to the United States.

The Jaquezes persevere. It’s what they do. After Jaime, called Jaimito by the father who shares the same name, was chased off a nearby park court with a bullhorn during the early weeks of the pandemic, someone later covering the rim with one of those clubs used to lock steering wheels, the family put up a basket in front of its house.

More recently, Jaquez powered through a face bloodied by an errant elbow, another blow to the head after falling onto the hardwood and one ankle injury after another to become UCLA’s most reliable offensive force and grittiest player.

His rise as a Bruin can be traced to that Hawaii harangue, even if it couldn’t save his overmatched team from another loss early in its rebuilding efforts under coach Mick Cronin. Jaquez became a starter that day, not to mention a star teammate, roles he continued to embrace while UCLA reached the Final Four one season later.

The fourth-seeded Bruins (27-7) will return to another big stage Friday night at the Wells Fargo Center against eighth-seeded North Carolina (26-9) in an NCAA tournament East Regional semifinal, hoping Jaquez can push through his latest ankle injury to lead his team once more.

“He went into the starting lineup,” Cronin said of the junior’s ascent, “and he’s helped build the program back to where it belongs.”

The kid was a big story the day he was born.

Those Lamaze classes Jaime and Angela Jaquez had taken to focus on breathing techniques during childbirth ended up being a waste as soon as the doctor announced that the baby wasn’t coming out. A c-section was going to be needed.

Jaime Sr. was startled when the doctor said “Whoa!” during the procedure, only to reassure him with his explanation.

The father learned just how big when he took the 10-pound, 3-ounce newborn for a stroll and saw another baby that seemed miniature by comparison. He was not trying to be ironic when he gave his son the nickname Jaimito, or Little Jaime.

The younger Jaquez played baseball and soccer growing up but gravitated toward basketball, the sport that brought his parents together at Concordia. Jaime Sr. was a 6-foot-1 defensive stopper who, along with his teammates, liked to hang out with their counterparts on the women’s team.

That led to a friendship and eventually a courtship when Jaime and Angela began dating senior year. The sports-crazed couple held similar ideals about competing and never giving up, regardless of the circumstances.

Their son didn’t immediately share their same fire, Jaime Sr. nudging him in that direction with aggressive coaching and a Jay Bilas audio book on resilience.

“It took him a little bit longer to get that, that meanness, that toughness,” Angela Jaquez said in late 2019 while sitting poolside in Maui with her husband. “I mean, he gets fire under him and you can always tell by his effort, but he’s even-keeled and the same demeanor. I don’t think the stuff people say on the court or anything people do affects him; I mean, it probably does, but he doesn’t let it show.”

It’s often hard to tell what Jaime is thinking, even in exchanges with his parents.

“How did you do in practice?”

At that point, Jaquez ended the conversation, saying he needed to do his homework.

Jaquez was a familiar name in the Ventura County sports landscape long before Jaime scored 54 points in a game for Camarillo High.

Grandfather Ezequiel was a standout baseball and basketball player at Santa Clara High in Oxnard before going on to play both sports at Northern Arizona.

Ezequiel’s brother, Dick, was invited to play in rookie league for the Houston Colt 45s (now Astros) and later coached an unbeaten baseball team at Oxnard Rio Mesa High before going on to be inducted into the Ventura County sports hall of fame.

The family settled in the Oxnard area after Gloria Jaquez, Jaime’s grandmother, met Ezequiel while traveling from her home in Zapotlanejo, Mexico, to visit a sister in the United States. They later married and she opened the hair salon in Camarillo, naming it after daughter Petula.

“Just imagine a lady not knowing the English language and running a very successful beauty salon,” Jaime Sr. said. “It’s like, you don’t know it at the time because you’re kind of just living it, but as you get older you kind of understand some things, you look back and you’re like, wow, that’s incredible, you know?”

Watching his mother’s business thrive and his father rarely, if ever, miss a day of work in his 30-something years of teaching instilled a relentlessness in Jaime Sr. that he has passed along to his offspring.

He can see it when Jaime battles his younger siblings, Gabriela and Marcos, on the basket outside the house. Despite giving up seven inches to her brother, the 6-foot Gabriela attacks with the ferociousness that won her a spot on UCLA women’s basketball coach Cori Close’s next freshman class. Should Jaime stay in college for one more year, the Bruins could boast their first brother-sister basketball combo since Ann and Dave Meyers terrified defenses in the 1970s.

Using the strength that has made him a star edge rusher on Camarillo’s football team, the 6-2, 250-pound Marcos doesn’t budge around the basket in one-on-one battles with his brother.

One body part after another has tormented Jaquez this season.

A cut above the eye. A sore head. One injured ankle, followed by the other.

Tyler Lesher, the team trainer, might have felt as if he were performing a real-life version of the board game “Operation.”

Through it all, Jaquez sat out only one game, against Oregon State, after one ankle became too painful to bear.

“He relishes the chance to put on that UCLA uniform,” Jaime Sr. said, “so he’d basically have to have a broken leg for you to take him off the court.”

In late January, Jaquez revealed that he was dealing with Synovitis in his ankle, a painful condition that leads to swelling. He began wearing braces on both ankles as a protective measure.

After a couple of unproductive games, Jaquez started to dominate. He took fewer jumpers in favor of more moves around the basket that showcased his skill and determination, head fakes and pivots leading to a flurry of points.

“He relishes the chance to put on that UCLA uniform, so he’d basically have to have a broken leg for you to take him off the court.”

Along the way, UCLA’s second-leading scorer also became its late-season savior, averaging 21 points over his last seven games at a time when leading scorer Johnny Juzang was stuck in a scoring funk.

Jaquez had already scored 15 points against Saint Mary’s in the second round of the NCAA tournament last weekend when he rolled his ankle while fighting for a rebound with about seven minutes left.

After Jaquez limped off the court, and did not return, many inside the Moda Center wondered if he might be done for the NCAA tournament. Those who knew him harbored no such doubts.

And if anyone tried to hold Jaquez out, even as a precaution, he would surely have something to say about it.