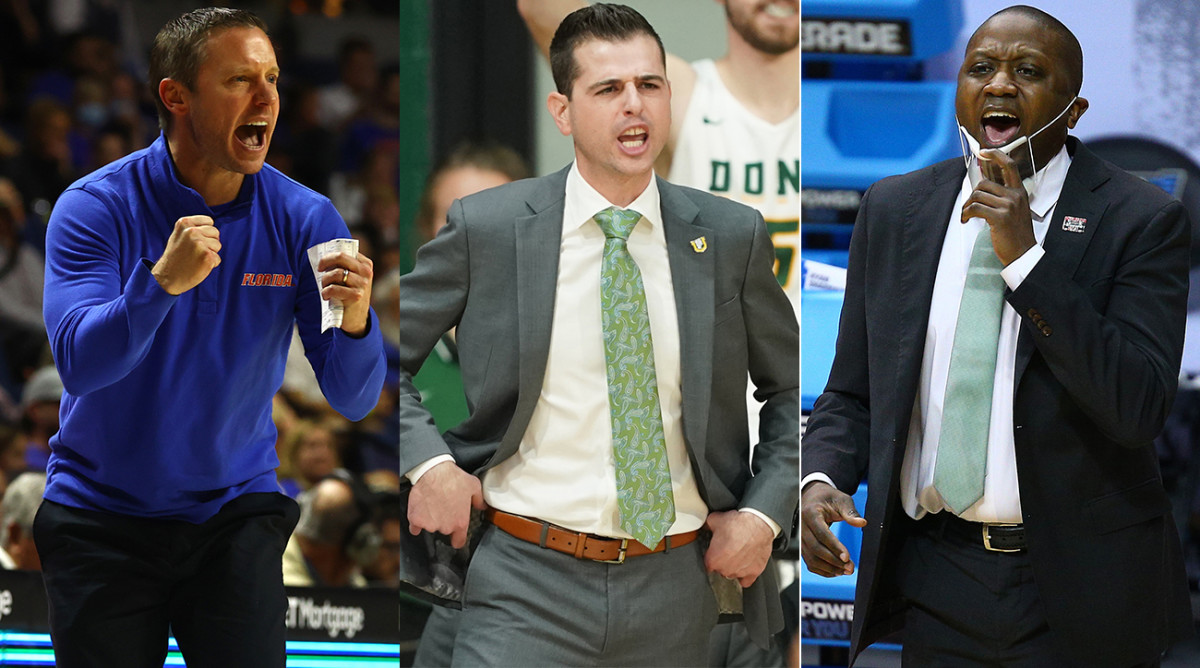 Coaching hires in college athletics are a bit like blue jean trends—what’s all the rage at one point in time might be considered hopelessly passé just a few years later. One day you wake up and your skinny jeans coach who looked so good when you purchased him has a losing record and has to go.

The SEC might be the ultimate follow-the-leader league in this regard. In football, the Nick Saban Assistant Trend has had a sustained run—with good reason, if not uniform success. (Kirby Smart, Jimbo Fisher and Lane Kiffin, yes. Jim McElwain, Will Muschamp and Jeremy Pruitt, no. Billy Napier, TBD.) In men’s basketball, the trends have been even more pronounced.

As the league made yet another attempt to catch up to Kentucky a few years ago, the Big Name Established Coach Trend was red hot. Final Four coaches looking for a second act were hired: Ben Howland at Mississippi State; Rick Barnes at Tennessee; Tom Crean at Georgia. So were coaches who had solid records of success at other power programs: Bruce Pearl at Auburn; Cuonzo Martin at Missouri; Frank Martin at South Carolina; Buzz Williams at Texas A&M. Some took a flier on NBA experience: Avery Johnson at Alabama; Jerry Stackhouse at Vanderbilt.

As those hires were being made from 2012 to ’19, there was a lot of talk about how the SEC was using its football revenue to raise its basketball game. Here in ’22, after some breakthrough successes (Final Fours for South Carolina and Auburn) but zero national titles since Kentucky in ’12, the SEC has opted for another hard reset.

With a whopping six new hires this month alone, the SEC youth movement is on. Many of those bigger names have been phased out. A more traditional hiring cycle is upon us, with rising coaches coming into the league from the mid-major ranks—less experienced and cheaper.

Matt McMahon has elevated from Murray State to LSU. Age: 43. Division I head-coaching experience before Murray: none. McMahon has twice won games in the NCAA tournament, in 2019 with Ja Morant and this season with a team led by a couple of Morant’s teammates from that season. He’s recruited the heck out of the South at Murray. The question is whether he will translate to a power conference better than most of Murray’s successful coaches over 30-plus years of remarkable program consistency. Mick Cronin and Mark Gottfried went on to do well, but Steve Newton, Scott Edgar, Billy Kennedy and Steve Prohm were less successful.

Todd Golden has elevated from San Francisco to Florida. Age: 36. Division I head-coaching experience before USF: none. Golden led the Dons to their first NCAA tournament berth since 1998 this year, losing an epic battle with McMahon’s Racers last week. He has experience in the SEC as an assistant at Auburn from 2014 to ’16. It’s not hard to find people sold on Golden, but he also took over a healthy USF program that had been brought up to speed by Kyle Smith—who is now doing good things at Washington State. Is he the guy to lift Florida from its good-not-great stasis under Mike White?

Dennis Gates has elevated from Cleveland State to Missouri. Age: 42. Division I head-coaching experience before Cleveland State: none. The longtime Leonard Hamilton assistant at Florida State got the Vikings to the NCAA tournament in 2021 and has won 39 games the past two seasons. He took over a program that had four straight losing seasons prior to his arrival. Gates’s name had been in the mix for several jobs last year and this month before being snagged by Missouri. But it’s a long way up from the Horizon League to the SEC; his highest-ranked Cleveland State team in the Pomeroy Ratings was last year at No. 169, which would have been last in the SEC by a wide margin in ’21. And the Missouri roster is in ragged shape after poor recruiting evaluations.

Lamont Paris has elevated from Chattanooga to South Carolina. Age: 47. Division I head-coaching experience before Chattanooga: none. Paris took over a program that had four straight winning seasons under two different coaches, went through a two-year struggle to get established and then won 65 games the next three years. The former Bo Ryan assistant at Wisconsin experienced life on both sides of the March fault line, earning an NCAA bid by a single point on a buzzer-beating bomb in the Southern Conference tournament and then missing a massive upset of Illinois by a single point. The South Carolina search was criticized within the industry, with athletic director Ray Tanner viewed as out of touch and ineffective.

Chris Jans has elevated from New Mexico State to Mississippi State. Age: 52. Division I head-coaching experience before NMSU: One season at Bowling Green, with his tenure abruptly ended by an incident in a bar. Jans has had spectacular success over an extended period of time, going 143–44 with three NCAA bids and one NCAA win. But NMSU already was built to win, with each of the previous four head coaches making the NCAA tourney and the school compiling 10 straight 20-win seasons outside of the pandemic-complicated 2020–21 season.

The one outlier to the current SEC trend is Mike White’s intraconference move from Florida to Georgia—though, like four of the others above, the 47-year-old is younger than the man he’s replacing (Tom Crean, 55). That has the feel of another college hoops coaching carousel staple: jumping one year ahead of being shoved out. White’s record is pretty good, but he suffered in comparison to Billy Donovan and showed no sign of being able to rekindle the glory days. Georgia, preoccupied with football success, would gladly take what White delivered in Gainesville.

Some are generally unimpressed with the SEC reset. “Terrible hires except for Jans,” said one industry insider who has been through hundreds of coaching searches. It’s possible that with increasingly massive investments in football—and in booster NIL deals for football players—schools are less willing to spend on hoops. Or it’s possible that, in a copycat league, everyone is searching for the next Nate Oats (hired from Buffalo) or Eric Musselman (hired from Nevada).

But the youth movement raises one other question: What becomes of the current dean of the SEC, Kentucky’s Calipari? After 13 seasons, he’s by far the most accomplished coach in the league—but that’s almost always the case for the Kentucky coach. And his declining returns have provoked a new level of impatience with the most ardent and demanding fan base in the country.

In consecutive years, Calipari has delivered the following: the worst season in school history (a 9–16 debacle in 2020–21) and the worst NCAA tournament loss in school history (to No. 15 seed Saint Peter’s last week). It’s now seven years since Cal’s last Final Four and a decade since his only national championship. For a guy making $8.6 million per year, Cal has stopped delivering proportionate return on investment.

Next season looms as a potential succeed-or-go scenario for Calipari—and after the disasters of the past two seasons, success by Kentucky standards isn’t making the tournament or the Sweet 16. It’s making the Final Four. The 63-year-old Cal was back in know-it-all form while he team was winning in January and February, tweaking critics who compared his offense unfavorably to Oats’s and wondering whether that part of the game had passed him by. But after the Saint Peter’s loss he resorted to grandstanding penitence, telling the fans to blame him instead of the players. (This was overcoaching. Virtually nobody was blaming the players.)

There has been a notable lack of damage control from UK after the Saint Peter’s loss. This was athletic director Mitch Barnhart in a radio appearance Monday, according to the Louisville Courier-Journal: “We have built the foundational pieces of Kentucky athletics and specifically Kentucky basketball to, layer upon layer, give us an opportunity to celebrate championship-level performance. We need to return to that. Our fans deserve that. I am deeply disappointed, as they are, that we didn’t have a chance to experience that this year.”

The sticking point to a potential Kentucky separation from Calipari: A massive buyout tied to Kentucky’s decision to award Calipari a “lifetime” contract in 2019 after he flirted with UCLA. The buyout number is a reported $46 million at present, prohibitive under any circumstance.

The long-suspected Calipari escape hatch was the NBA, but it’s hard to imagine the league having any interest in him at this point. If next season is another disappointment, Kentucky might have to hope Cal pulls a Tubby Smith—leaving for a lesser job on his own, knowing the the jig is up—or simply retires.

Kentucky could turn over coaches by this time next year. Mississippi might as well, with 62-year-old Kermit Davis losing traction the past two seasons. Tennessee coach Rick Barnes is 67; how much longer does he want to go?

The turnover is high in the SEC, and it might not be stopping in 2023. In this league, the blue jeans don’t stay in style for long.