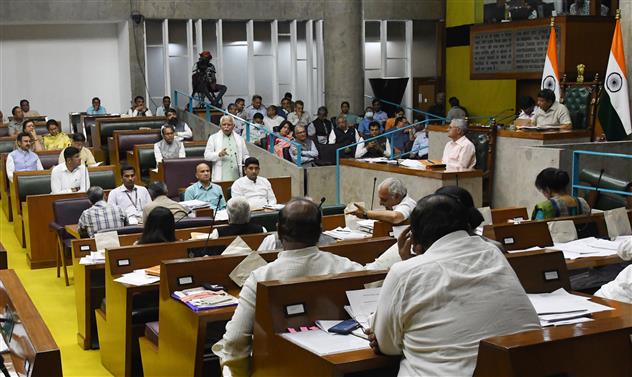 Amid Congress opposition and walkout, the Haryana Assembly on Tuesday passed a Bill against religious conversion through force, undue influence or allurement.

The Bill, which had been introduced on March 4, was taken up for consideration and its passing in the Assembly on Tuesday.

Similar Bills in the recent past have been passed in the BJP-ruled state, including Himachal Pradesh and Uttar Pradesh.

According to the Haryana Prevention of Unlawful Conversion of Religion Bill, 2022, if conversion is done by allurement, use of force, fraudulent means or coercion, then there is a provision for imprisonment of one to five years and a fine of not less than Rs 1 lakh.

As per the Bill, whoever converts or attempts to convert a minor, a woman or a person belonging to the Scheduled Castes or Scheduled Tribes, shall be punished with imprisonment for a term which shall not be less than four years, which may extend to 10 years and liable to fine not less than Rs 3 lakh.

Congress leader Bhupinder Singh Hooda, who is the Leader of the Opposition, said already in the existing laws there is provision of punishment for forcible conversions and there was no need to bring a fresh law.

Senior Congress leader Kiran Choudhary said, “I think this will be a black chapter in Haryana’s history”.

She said already there is provision of punishment for forcible conversions.

“This Bill will deepen the communal divide, this Bill is scary. It can have grave consequences in future..the shape in which this Bill has been brought is what we are objecting to,” she said.

Senior Congress leader Raghuvir Singh Kadian said, “There is no emergency or urgency for bringing this Bill. I feel that this Bill smacks of divisive politics, which is not good”.

The Congress members later staged a brief walkout from the House.