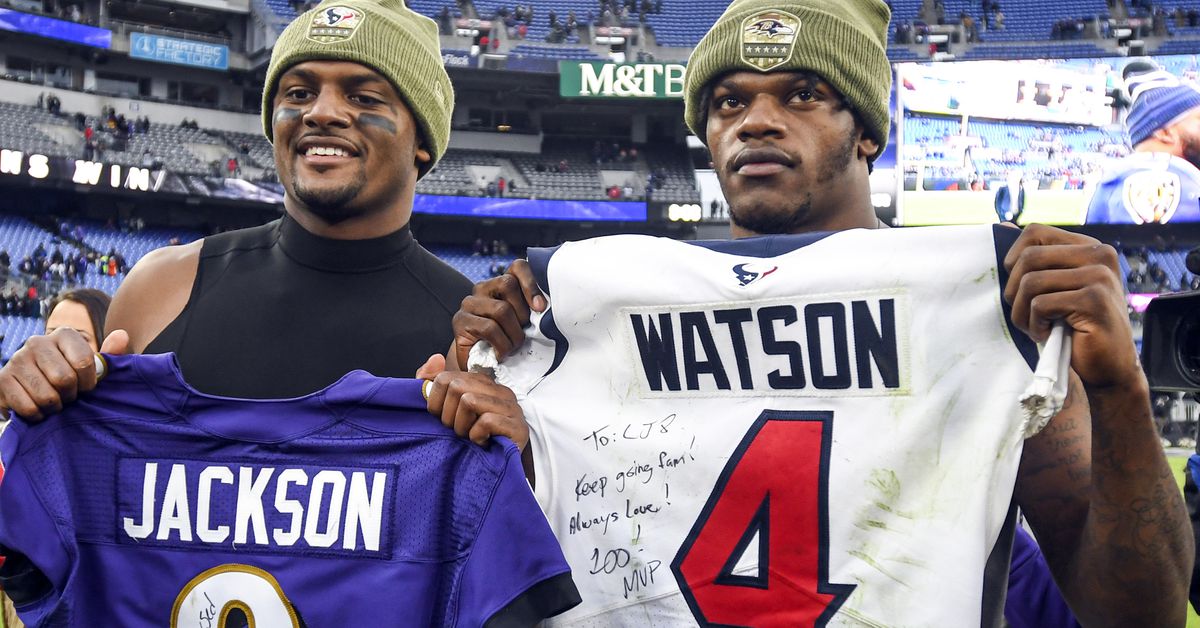 Many believe that the blockbuster trade that sent Deshaun Watson from the Houston Texans to the Cleveland Browns in exchange for three first-round picks, a third-rounder, and a late-round pick swap will shift the balance of power in the AFC and especially in the North.

However, the more seismic impact of the transaction as far as the Baltimore Ravens are concerned is the new deal that the three-time Pro Bowl quarterback signed with their division rivals and how it will impact their ongoing talks with their own star signal-caller.

Deshaun Watson gets a fully guaranteed 5 year $230M contract. That is $80M more than the previous record for fully guaranteed money at signing ($150M). This deal was negotiated by David Mulugheta of Athletes First. https://t.co/nQls9WRpD1

The Ravens are in the midst of negotiating a long-term extension with 2019 unanimous league MVP, Lamar Jackson. While they would love to sign him as soon as possible, according to multiple reports in order to free up cap space in the immediate future to keep building around him, the 25-year-old is in no rush to ink a new deal and appears to be willing to play out the remainder of his rookie contract.

When news of Watson’s new team and more importantly new deal broke, Jackson was among the first and most notable to congratulate him.

It seems the longer that Ravens and Jackson wait to come to terms on an extension, the market rate for an elite franchise quarterback, of which he is, continues to skyrocket. While Watson isn’t the highest-paid player at the position in terms of average annual salary, he received a fully guaranteed contract of $20 million—the most guaranteed money any player in NFL history has received. No doubt, this will certainly impact what Jackson will likely want when his time inevitably does come.

Based on individual and team accomplishments alone as a starter, Jackson is more decorated than Watson. Both have been full-time starters for just three full seasons and had another cut short by injury. While Jackson has one fewer Pro Bowl nod over Watson, Jackson has more career wins (37 to 28), including a 2-0 head-to-head record, more career rushing yards and touchdowns, and a league MVP award.

Jackson has made First-Team All-Pro whereas Watson has yet to even be named to the second team, and even though they have the same number of playoff wins with one apiece, Jackson has made the postseason three times to Watson’s two. There is also the fact that Jackson has never finished a season with a losing record as a starter while the Texans went 4-12 in the last season Watson played for them in 2020.

All of the concrete facts listed above are viable bargaining chips that Jackson and his team can use to drive up his asking price whenever he does decide the time for a new deal is right. Some speculate that he intends to take the same ‘bet on yourself’ route that quarterbacks like Kirk Cousins, Joe Flacco and Dak Prescott did before they cashed in big and is willing to even play on the franchise tag for a year or two.

It is highly unlikely that Jackson will want to squeeze every last penny out of Ravens on his next deal despite the continued projected growth of the salary cap going forward. He knows that it will limit the amount of veteran talent that General Manager Eric DeCosta can retain and acquire and make them entirely too dependent on the draft. However, he knows his worth and won’t take anything significantly below market value and after Watson and his representatives blew the top off it, the price tag is only going up from there.