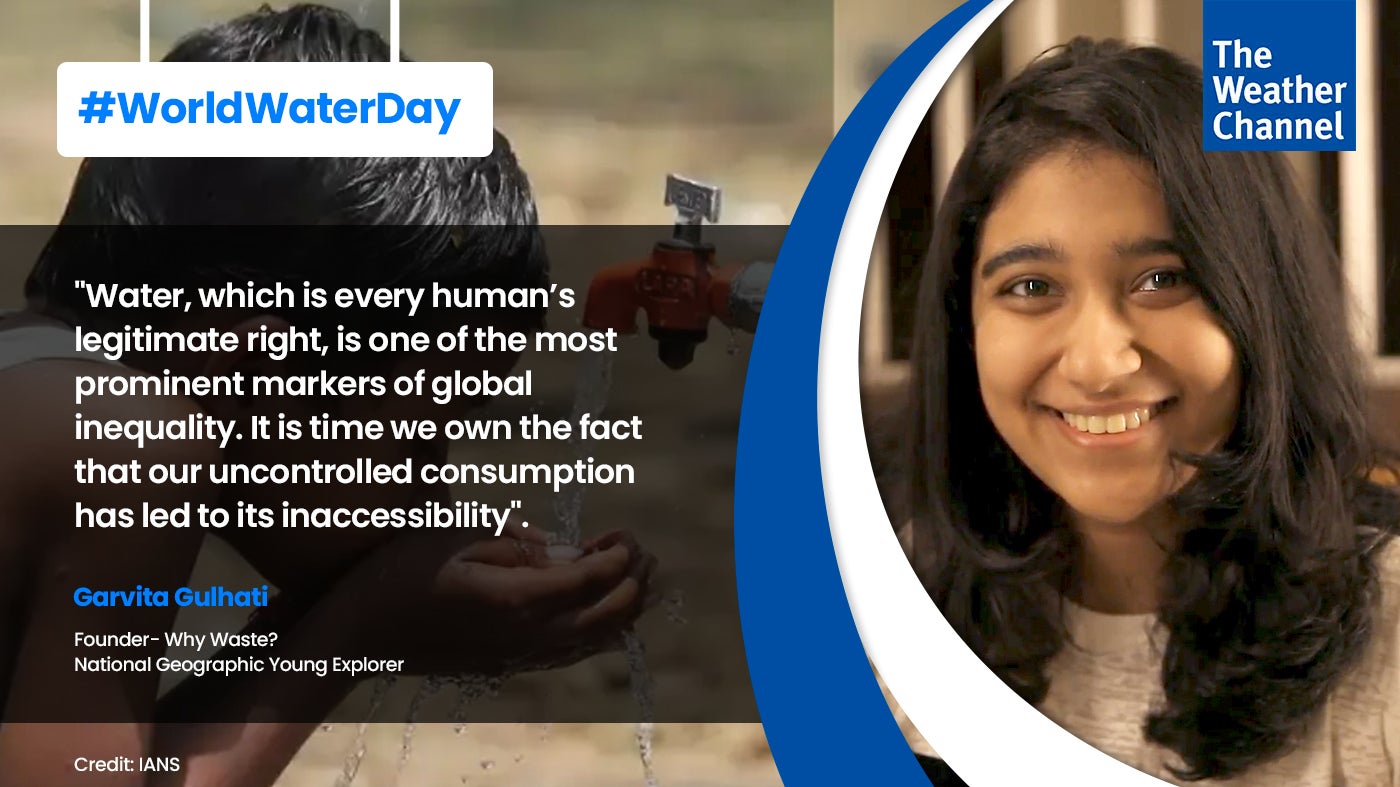 India primarily relies on the monsoons for its water supply, and in most places it’s available for just over 100 hours in a single year. Today, 7% of India’s population or nearly 10 crore people across India, lack access to the most fundamental resource—clean water supply.

While the nation struggles to solve this problem on a larger scale, a little girl was determined to start from the grassroots level. At the tender age of 15, Garvita Gulhati, founder of the NGO ‘Why Waste’, began her water conservation journey by asking a simple question: What happens to the unfinished glasses of water left for the restaurant waiters to pick up? When many teens of her age spend hours lost in world of social media, she fought to save every drop of water.

Today, after six years full of struggle, the water girl, now 21, has already made it to the Forbes 30 Under 30 Asia-Pacific list of Social Entrepreneurs. She was also recognised with the prestigious Diana Award—established in memory of Diana, Princess of Wales—for her highly inspiring efforts for social action. Garvita is also the first and only Indian to be awarded a Wonder Grant from the Shawn Mendes Foundation. She is an expert mentor at Global Citizen Year and works with UNICEF on their Youth climate strategy.

On this World Water Day, Garvita walks us through her journey towards water conservation and sustainable water usage.

What inspired you to start your own NGO ‘Why Waste’?

In the summer of 2019, when the coastal city Chennai faced a massive water crisis, visuals of clueless and agitated residents and their desperation flooded social media. My team and I actively worked at the grassroots to educate people about sustainable water usage during this period.

But I took to water conservation in my teens in 2015 during one of my trips to Ahmedabad, Gujarat. As I walked around one of the most iconic step-wells in the world, a little girl ran up to me, exasperated. I thought she needed some money. But, surprisingly, she pointed at the bottle in my hand — she just wanted to quench her thirst! I quickly handed over the bottle, and her eyes lit up with a grin on her face. The irony of this experience was tremendously pivotal, making me realise the value of water!

A few months later, on World Environment Day, I learned that the unfinished water in glasses at restaurants amounts to fourteen million litres every year! The divide between the two worlds —fourteen million litres of wasted water and the little girl I met at Ahmedabad —shook me. I committed myself to save every drop of water I could and founded ‘Why Waste?’ to change people’s mindsets towards water usage.

What were the initial hurdles, and how did you overcome them?

When I started, I was just 15! My family and teachers pushed me to focus on my studies, and my friends would taunt me by saying, “Why are you wasting time with Why Waste?”. Restaurateurs refused to take advice from a teenager. Moreover, our solutions didn’t comply with them. However, I felt so connected to this purpose that I refused to give up. I re-approached the problem of water being wasted in restaurants with the “GlassHalfFull” philosophy. Our place-cards told customers provoking stories, and showed restaurateurs the monetary benefits. Filling the glass only half taught everyone to take only as much as they needed and not to waste water.

In 2018, I petitioned the National Restaurants Association of India and campaigned for an entire year, persuading them to take this concept to the half a million restaurants they represent. After proving that the idea saved over 50% of water, I finally won their support. Subsequently, I worked closely with them to change critical policies around water usage at restaurants.

Can you describe the situation of current water resources and the need to conserve them?

When we run out of this elixir of life, we lack the fundamental resource to begin our day. Even when searching for a habitable environment on another planet, the first resource we look for is water.

Water is also one of the most prominent markers of global inequality. Women and girls in the most rural parts of the world walk miles to get a pot of water that most of us get by just moving a finger. In India, children from millions of homes lack simple access to clean drinking water, and one out of every two children are malnourished because of this. While we may think of the water crisis as a nightmare, it is already a lived reality for many! And the changing climate and its impact on water resources is only making it worse.

It is time we own the fact that our irrational and uncontrolled consumption has led to this inaccessibility; what is their legitimate human right!

In 2017, Cape Town was declared the first city globally to hit Day Zero. The city was runnning out of water! But with a surprising turn of events, Cape Town’s Day Zero kept getting pushed. Extraordinary efforts of residents and authorities to unitedly calculate and rationalise their consumption was key to the city’s resurrection from its water woes. They cut their water consumption to less than half of what was four years ago, pausing the Day Zero countdown clock indefinitely.

But today, there are many more cities travelling on the path of Day Zero. In India alone, there are 21 cities—some of our most populous and advanced cities—all set to reach the dry day by the year 2025. Moreover, India has already dug 22 million borewells (compared with China, which has dug 2 million and the US at 1 million). It means we are not just using groundwater but mining it; only because we have failed to replenish it. While we have developed on multiple fronts, this fundamental lack of access to clean drinking water damages all of the collective progress.

Will more awareness reduce the pressure built on our planet over the years?

Absolutely yes! If you trace back human history, you’d realise that evolution of the brain was one of the primary drivers of shaping the world that we live in today, which is why we as a species are so different from any other organism thriving on this planet. We’ve been built in a way to adapt to fight and flight. So the way our world has been shaped and mapped, whether businesses or mass reactions, is based on instinct. Unfortunately, that has also led to the destruction of our planet. It is essential to realise that if we choose not to behave instinctively but mindfully, we will be able to build an impact collectively.

For example, it was a collective effort to give up plastic straws, which compelled businesses to stop their mass production and invent paper and steel straws instead. We as consumers have an incredible power to change the way things are perceived and consumed, turn it into a circular economy, and move closer to our climate goals. The crucial step here is to not blame people for the existing problems and instead look for solutions and think about where the problems stemmed. Positive influence always works better!

When it comes to changing the mindset, through my personal experience, it was fascinating to see how people reacted to even the ‘glass half full’ campaign. We’d receive messages from people that our movement changed their perspective not just about water wastage in restaurants but also in other aspects of their lives. People were able to make this solution their own!

How is the United Nations campaign ‘We, The Change’ inspiring young minds to fight climate change? As a Youth Climate Leader, what was your contribution to the campaign?

United Nations campaign ‘We, The Change’ was initiated to inspire the youth to realise their power as become changemakers. The last year’s campaign was a pre-Cop26 engagement to bring the voices of young people to the front and bring their work to the notice of stakeholders and decision-makers, also encouraging more youngsters to become a part of the decision-making process. The United Nations wanted to show the globe that so many key youth climate leaders have solved significant problems that exist locally and have managed to create a positive impact.

As part of the campaign, we reached tens of thousands of people across countries. We were also part of a vital dialogue held on United Nations Day, which happened at the international solar alliance. There, we had the opportunity to engage with ministers and stakeholders from the United Nations and various other organisations.

Early on, while working on water conservation, I realised that there are several kinds of water-related problems across the globe, and while I’d like to solve them all, I can’t do it alone. Partnering with multiple people and ideas help us build better solutions and reach larger communities.

Many of the more extensive collaborations that we’ve had have also helped us take our ideas to the global forefront to show the masses that our solutions don’t apply to specific communities but will work in multiple regions across the globe.

Through these collaborations, I personally have been able to inspire more young people to become changemakers.

What have been the achievements of your campaigns and projects so far?

Through our viral #GlassHalfFull campaign, ‘Why Waste?’ began working with restaurants to help them prevent wastage of water left behind in glasses, in addition to conducting workshops. Our work has reached over 5 lakh restaurants & 6 million people and contained over 10 million litres of water wastage.

We recently published “The Sustainability Stories”, a ‘for youth-by youth’ collection of 13 new-age fables that talk about environmental issues and inspire children to be the change. We published the books in partnership with Pratham, India’s largest non-profit publisher, now bringing these to life on video with UNICEF.

Late last year, we also launched the ‘Why Waste?’ App that helps every individual calculate their water footprint and helps them save at least 100 litres of water every single day through a gamified approach. In partnership with CNN, ‘Why Waste?’ is encouraging more people to calculate their water footprint and become part of the change through their national campaign “Mission Paani”.

How do you envision Why Waste’s journey in terms of water conservation and climate change?

Our goal is to help every person realise that they can be a part of solving the water crisis. Through our simple, hands-on solutions, we want to empower each individual to take charge of their water consumption habits and pioneer change by simply altering their habits! We hope to do this through initiatives like the “Why Waste?” App, while also innovating ways to make the conservation dialogue more inclusive and empower individuals in the remotest of areas to take charge of their assets.

Sustainability in Businesses and sustainable businesses are key to reversing climate change. As virtual/hidden water, we consume much more water in the products you use than in your daily consumption of flowing water. These products be it clothes (2000L of water to manufacture a pair of jeans), vehicles (30,000L of water to manufacture a car), or even food (700L of water to make a single burger), consume an abundance of water and are all driven by unsustainable businesses. Therefore reimagining capitalism is key to solving this because it will be challenging even for businesses to thrive if climate change isn’t fixed.

This article is a part of a series titled ‘EcoGuardians’. The interviewee’s opinions do not necessarily represent the official views of The Weather Channel. Few answers have been partly edited for length and clarity.

For weather, science, and COVID-19 updates on the go, download The Weather Channel App (on Android and iOS store). It’s free!