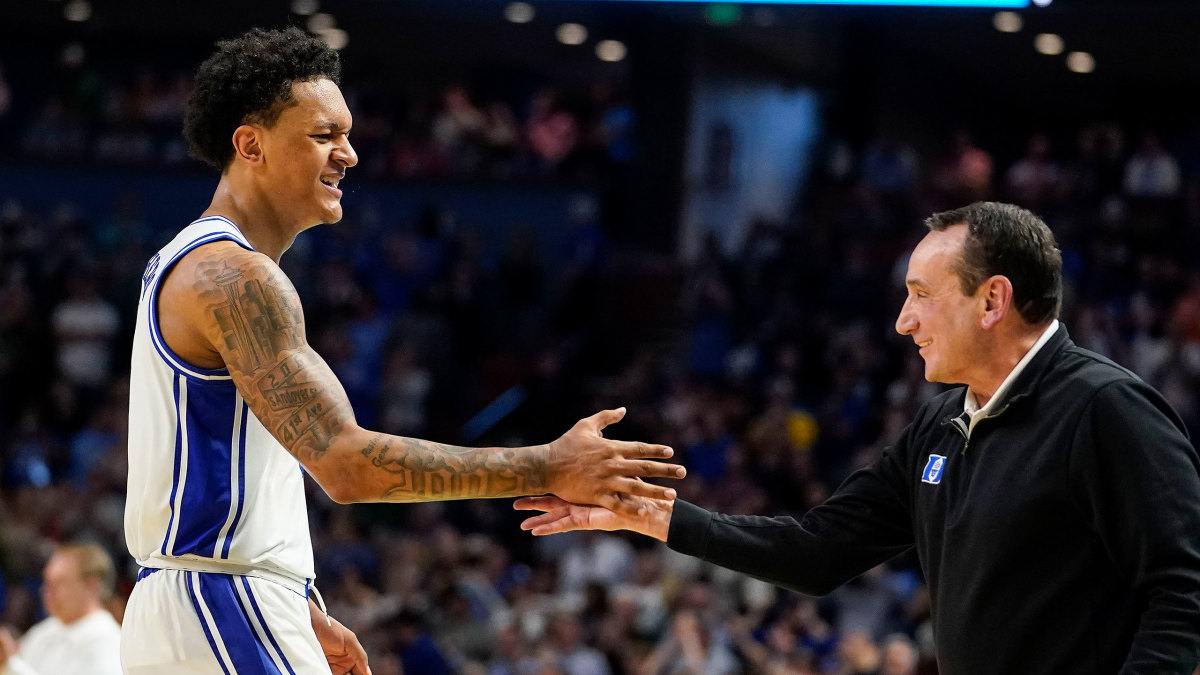 While the rest of the men’s Sweet 16 field celebrates punching their tickets, the No. 2 Blue Devils are steadily lapping them in their collection of hardware, the most recent coming Sunday in an 85–76 win over No. 7 Michigan State at Bon Secours Wellness Arena.

“That’s how we’re approaching it,” Krzyzewski said. “Every game is a championship. You have to beat a great team every time you play. It’s like a championship.”

After rolling in title game No. 1 on Friday, a 78–61 win over No. 15 Cal State–Fullerton, Krzyzewski took down Tom Izzo, extending his all-time record over his old friend to 13–3, and avenging an NCAA tournament loss to the Spartans in 2019.

The win was No. 1,200 in Krzyzewski’s storied career, a feat he downplayed after the game.

“Obviously, it’s a lot of wins against quality competition,” Krzyzewski said. “Today was a good example of that. So, 1,200 is great, but seeing my grandkids and my family cheering and crying after the game was better.”

Krzyzewski had his own bout with emotions when talking about his team’s resilience and fortitude, turning to his players with tears in his eyes and saying, “You guys were terrific, man!

“I’m really proud to be your coach. It had nothing to do with coaching in those last four or five minutes, it was all about heart and togetherness, and they followed their hearts and God bless ’em; we’re in the Sweet 16.”

Star freshman Paolo Banchero certainly got the “win a title” memo, scoring the go-ahead bucket with just under two minutes left in regulation and then blocking Spartans forward Joey Hauser’s shot attempt on the next possession. It set up a critical Jeremy Roach three-pointer to extend the lead.

“We got down and, in the timeout, we said, ‘We can either lay down or turn it up,’” said Banchero, who posted 19 points, seven rebounds and four assists in the win. “It’s about having heart and just trusting each other.”

Duke certainly played championship-level defense on Hauser, whose hot hand produced a career-high 27 points in their Round 1 win over No. 10 Davidson. On Sunday, Hauser scored just five points and shot 1 of 5 from the field for the game.

Even after Spartans forward Gabe Brown picked up Hauser’s slack in the first half with 14 points, Duke held Brown to just four points in the second half, two of which were on a breakaway slam.

“I knew I was gonna have to bring my A-game,” Banchero said of his defensive effort.

It wasn’t a flawless defensive performance; and maybe that’s be expected in a heavyweight bout in March. Duke had small defensive miscues at times on the perimeter, which turned into open looks. Michigan State capitalized, knocking down 11 of 22 (50%) for the game—well above their 37% season average.

Still, Krzyzewski was laser-focused on Duke’s resolve after falling behind by five points with just over four minutes left in regulation. “We were so good in the last part of the game, I can’t tell you how proud I am of them,” he said. “They believe in one another.”

That bond was birthed last summer on two road trips to the Nike Peach Jam tournament. Banchero, Roach, Trevor Keels, Wendell Moore Jr. and Mark Williams piled into one car to cheer on their old AAU teams and developed a closeness that set the tone for the entire season.

“Ever since then we called ourselves the ‘Road Crew,’” Moore said. “We knew it was gonna come down to us at some point, so once we got into the huddle, we just looked in each other’s eyes and we knew we weren’t gonna lose.”

Two games and two championships in the bag in Greenville, Krzyzewski gave the Road Crew the coordinates for its next quest for titles.

“We take it to San Francisco,” Krzyzewski said.