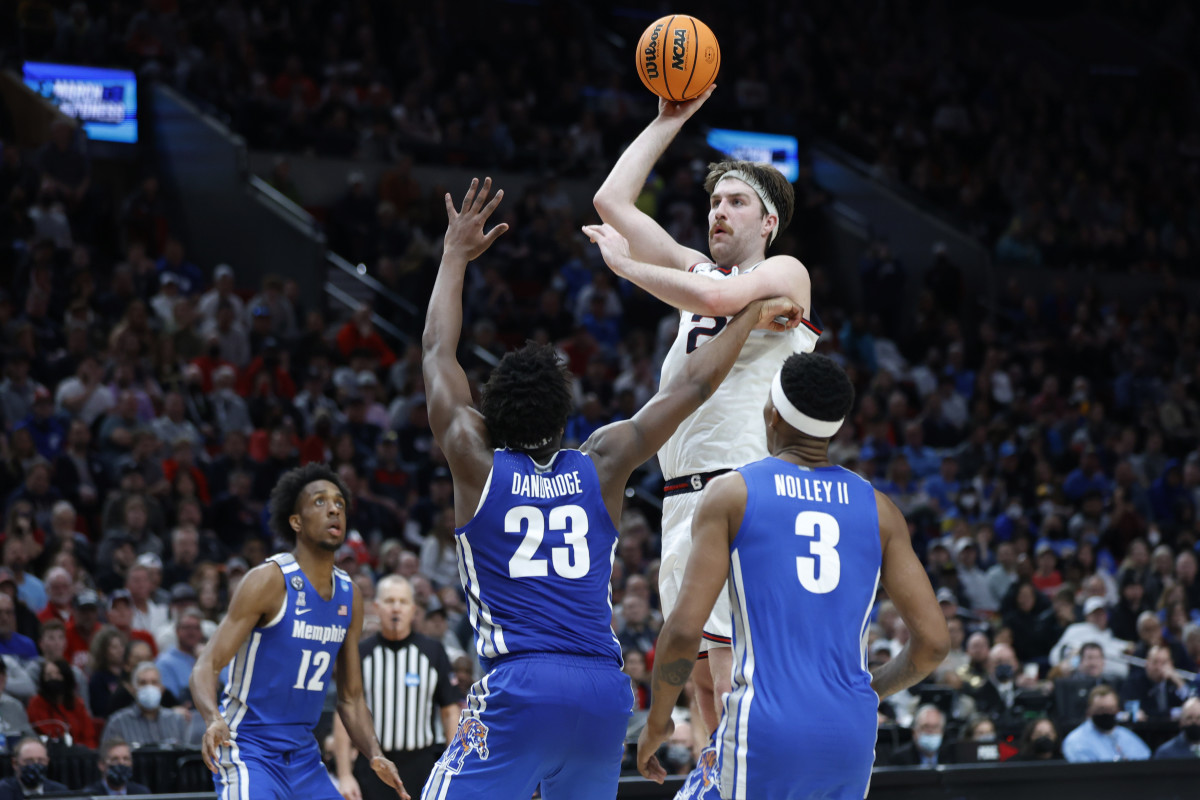 PORTLAND, Ore.—As the extended Timme family sat down at a local coffee shop Saturday afternoon, they had yet to shift their focus to Gonzaga’s tricky match-up against surging Memphis. Hours still remained before the top-ranked and top-seeded Bulldogs would tip off in the second round of the NCAA tournament, their championship hopes bolstered by the mustache-shaping, biceps-flexing, kisses-blowing forward known in the Timme household as their (heavily disputed) Tic-tac-toe champion.

Drew, the oldest of Megan and Matt’s three children, was at a nearby hotel, lounging with his Gonzaga teammates, preparing to play again and continue their latest run at an ever-elusive title. The four other immediate family members huddled around the cell phone of his younger brother, Walker. On the screen, they spied a familiar foe–Baylor, the program that toppled the undefeated Zags in last year’s national championship game. No. 1 Baylor was trailing against North Carolina. It would later lose to the Tar Heels, and when the Timmes saw this, they didn’t say much. Nods were exchanged. Maybe a tight smile or two. But it was not yet time to celebrate.

Soon enough, they would confront a potential upset of their own.

Flash forward to Saturday evening at the Moda Center. It was halftime, and Gonzaga wasn’t just losing to Memphis. The Tigers had been more physical, dominated on the boards, and held the Bulldogs without a field goal for the final 4:12 of the first half. Memphis led by 10. When a rowdy young Zags fan was escorted from the floor by two security guards, the Tigers mascot—with POUNCER as its name on its jersey—wagged his furry finger as if to say, “Not today.”

Gonzaga was in its locker room, but it wasn’t coach Mark Few delivering an emphatic message to his program—the one with a complicated NCAA tournament history and early exits the Bulldogs believed they left all behind in their distant-but-not-that-distant past. Instead, it was Timme who stood before the Bulldogs. He did not speak so much as he shouted, his eyes watering and voice cracking with emotion. He used the word “soft” to describe their first-half performance. He reminded his teammates that, for some, the next 20 minutes could be the last college hoops they would ever play. He told them he loved them, that they needed to play a second half they would not regret. He wanted to go out “guns blazing,” and not the finger gun variety he prefers for in-game celebrations.

“We aren’t going out like this!” he screamed, hitting the crescendo. “No f—— way!”

As the teams jogged back onto the floor for the second half, someone in the Memphis cheering section yelled out, “I’ll take one Penny over a No. 1 seed!” They meant Penny Hardaway, the Memphis coach who had righted a season wobbled by inexperience and injury and cobbled together a 14-2 finish to the season. Maybe they were right.

The Zags threw the ball to Timme right away. He muscled into the paint, spun, twisted and scooped in a lay-up with his left hand. He thumped his chest, as if to announce that he and Gonzaga had awoken. Next possession: a Timme 3-pointer from a few feet behind the top of the key. He thumped his chest again and waved both arms, imploring the pro-Gonzaga crowd to scream louder than it had all night. Timme hit an off-balance floater. Timme chest-bumped teammates. Timme drained a soft floater. He clapped and clapped some more. Timme lofted in a sky hook. He flexed and leaned back, unleashing a roar. All told, he scored 11 points in four-and-1/2 minutes and willed the Zags back into the fray. (He finished with 25 points, 14 rebounds and four assists.)

What a game—for Timme, Gonzaga, Memphis and anyone with a passing interest in elite college basketball. The atmosphere, talent level and pace more closely resembled an Elite Eight or Final Four contest: tight and tense, played at a gallop, back and forth, with seven lead changes and the score tied 10 times. Memphis did not fold. Forward Emoni Bates rattled in a tough fadeaway. Forward DeAndre Williams slammed home a dunk. But Timme could not be stopped. He could not be slowed. When the Tigers sent extra defenders his way, he dished to guard Andrew Nembhard (23 points), guard Rasir Bolton (17 points) and center Chet Holmgren (nine points).

Timme started to look tired, which the Memphis cheering section gleefully noted every time he ran down court. His face was red, hair disheveled, headband askew. He still played almost 37 minutes. Nembhard played all 40. The two cornerstones of Few’s latest contender—“This is their team,” he has said—even turned in the highlight of a night with no shortage of how-did-that-happen-type of plays. Nembhard saw Timme streaking down court, a few steps ahead of the nearest Tiger, and lobbed a long pass toward the mustachioed forward who had pushed Gonzaga toward this exact second-half surge. Timme turned to catch the pass and his momentum almost took him over the baseline. But somehow, he managed to hold onto the ball, steady his body just enough and lay it in while not facing the basket or stable in his positioning.

“They went to the championship level,” Hardaway said afterward. The “Drew Timme Effect,” he called it, adding he had seen the same performance on film, game after game, month after month.

After the final buzzer sounded to seal their 82-78 comeback victory, the Zags hardly celebrated. Perhaps that was because they understood as well as any team in the field that there are two weeks and four games to go if they want to seize their first national title in program history. They learned it last season, when they advanced to the national title game without a loss, only to be blown out by Baylor. No Bulldog would say this publicly, but some around the program have told Sports Illustrated they believe Gonzaga received an atypically difficult draw for the tournament’s No. 1 overall seed. They noticed Memphis loomed in the second round, followed by fourth-seeded Arkansas next week in San Francisco and then potentially second-seeded Duke or third-seeded Texas Tech.

Still, it would be a mistake to consider the first week of Gonzaga’s latest title bid any sort of failure. Yes, the Bulldogs played two forgettable first halves in Portland. And, against Memphis, they sure did misfire on 11 free-throw attempts. But this is still a team that ranked in the top 10 nationally in offensive and defensive efficiency. It’s still a team with an elite point guard (Nembhard), a soon-to-be NBA lottery pick (Holmgren), Final Four experience from last season and, of course, Timme, their superstar who shows up to games looking like he’s headed for pick-up hoops at the local Y. Gonzaga remains the favorite as it heads into its seventh-straight Sweet 16, having survived a game, Few said, that was “as physical as we’ve been in all year.”

When asked about his time in Portland—duds in two first halves, followed by explosions in two second halves—Timme laughed. “Well, I would like to stop doing that,” he said in response to the back-and-forth nature of his tournament. Scratches dotted both of his arms. The mustache framed a smiling face. At that moment, Timme looked like Timme, and Gonzaga looked like Gonzaga. And, if this is truly, finally the year the Bulldogs win the title that has eluded them, this was as good a look as any heading into the second week.